In Wendy’s Revenge, Scott’s titular heroine returns with a fresh set of awkward misadventures and messy nights out. When the book opens, aspiring artist Wendy has decided to move to the west coast to clear her head.

She plans on getting some quality time with her collaborator and friend Winona, only to find Winona packing up to leave, having decided to move back in with her mom on the rez. All alone, Wendy endeavours to foster community in Vancouver’s bleak art scene. When her hope and optimism are all used up, she packs her bags for an artist residency in Japan. Wendy then gallery hops and parties around the globe until she stumbles upon the opportunity to unite with former foe Paloma. Together they enact revenge on VVURST, the German publication that once tore her performance art to shreds.

Young artists struggle with mental health issues, they get wasted and hook up with men with gross piercings, and they’re afflicted with an insatiable longing for a stable identity—stability they themselves undermine. Scott’s deceptively simple, inky character drawings evoke millennial culture with such Jungian accuracy that you can’t help but stare and giggle in equal measure. Praised by The New Yorker, Guardian, Globe and Mail, and with an appearance in the Best American Comics anthology, it’s clear why Walter Scott’s Wendy comics have taken critics by storm. 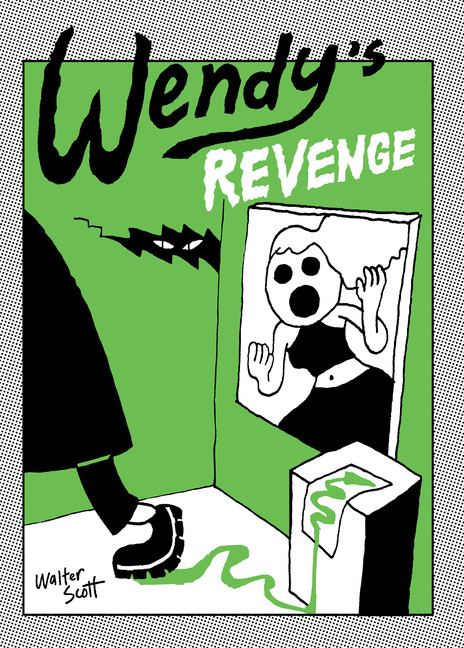 $22.95
PRAISESPECSEVENTSPRESSAWARDS
"As far as I’m concerned, there can never be too many books about Wendy. This is a character I want to follow for a long, long time."—London Free Press

"Scott manages a rare thing: the sharpness of his satire doesn’t preclude a realistic rendering of personhood, and the seeming flatness opens up, at every turn, to a depth of feeling…. His mastery of his characters’ faces and gestures is also wonderful, his line quick and sure and expressive."—The New Yorker

"I thought I regretted not going to art school until a friend introduced me to Walter Scott’s Wendy comic book series... Wendyskewers art school and young adulthood alike via the lens of [its] titular protagonist."—New York Times

"Like just about all of her contemporaries, so broke and uncertain and desperate to do the right thing, poor Wendy inhabits a particularly precarious world – and thanks to this, even when she’s at her most ridiculous, we’re inclined always to give her a pass."—Rachel Cooke, The Guardian

"As far as I’m concerned, there can never be too many books about Wendy. This is a character I want to follow for a long, long time."—London Free Press

"It’s hard not to yell out loud while reading Walter Scott’s agonizingly hilarious graphic novels... Even people only fuzzily familiar with the vagaries of contemporary art will recognize the humanity of Wendy, trying and failing, trying again."—The Tyee

"Scott uses his powerful female character to puncture holes in all kinds of sacred cows, raising questions about the absurdity of our modern lives, the shallowness of what society often tends to celebrate, and even the inadequacy of education when it comes to dealing with real-world anxieties. Taken together, these books give us valuable insights into what motivates and challenges a generation."—Broken Frontier

I am blown away by Walter Scotts Wendy series. Zadie Smith

Wendy, her pals and her milieu comprise a fictional world as fully and funnily inhabited as any in recent Canadian storytelling.Globe & Mail

Funny, poignant, and scary. Scott makes you laugh and then rips your heart out.Literary Hub

I am blown away by Walter Scotts Wendy series.

At Home with Walter Scott

“No, Wendy! No!!” It’s hard not to yell out loud while reading Walter Scott’s agonizingly hilarious graphic nove...