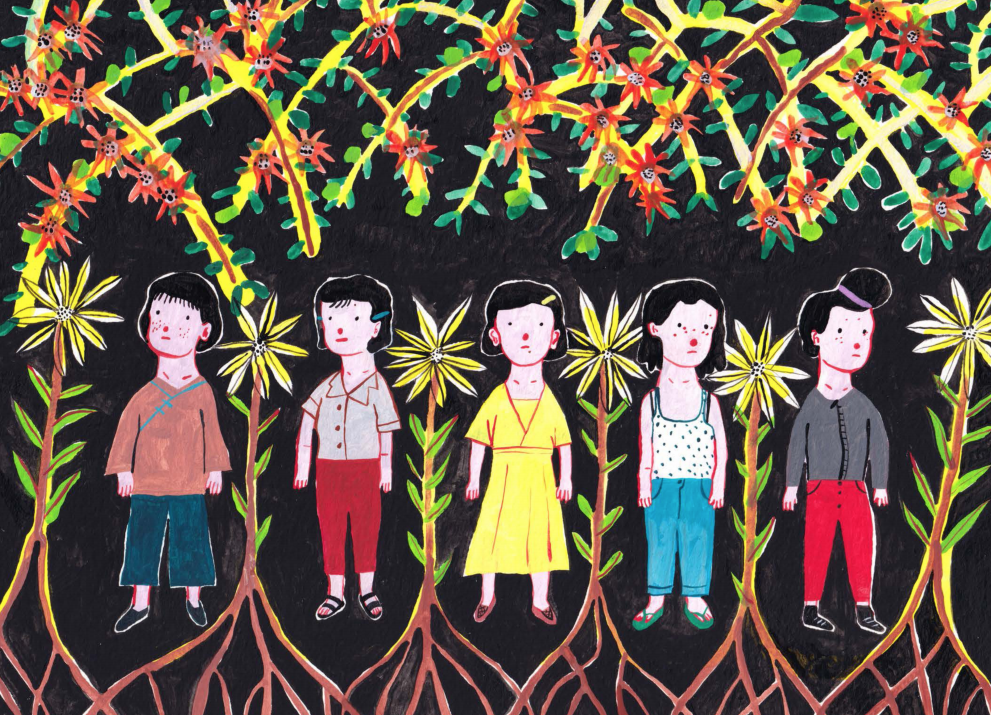 Timeless and ambitious: a review of Let’s Not Talk Anymore

Drawing on the past

Let’s Not Talk Anymore is the ambitious followup to Weng Pixin’s critically acclaimed Sweet Time. Here, the Singaporean-born cartoonist uses her signature watercolour and pastel paintings to trace her lineage back (and forward), as she explores intergenerational trauma through the women in her family. Blending history with autobiography with speculative fiction, Pixin’s narrative spans 100 years while remaining timeless in its depiction of how family bonds are formed and broken.

Pixin artfully explores generational gaps and shared desires through a series of vignettes depicting her great-great grandmother Kuan, her grandmother Mei, her mother Bing, Bi (Pixin’s character-surrogate) and her hypothetical future daughter Rita, all at age 15. The experience of being a teenage girl, when emotions are high and independence is hard-won, drives most of the narrative as Pixin weaves in and out of different timelines, establishing traces and echoes of loneliness, longing, guilt and love that are passed down through each generation.

Let’s Not Talk Anymore thrives in the spaces between her characters’ interiority and their relationships. Dialogue is direct and conversational, and most of Pixin’s character development occurs visually; each section ends with rich, full-page tableaus that encapsulate the book’s bittersweet mood.

In the first few pages, Bi’s great-grandmother, Kuan, is shown with her own mother as two tiny figures working in the middle of a vast field. The landscape is overwhelming, as Pixin makes evident the necessity of their bond not only for love, but for survival. Soon thereafter, Kuan is sent abroad to America, gifting her mother a small hand-woven basket as a token of remembrance.

The women are all visual artists in some way, and this "quiet" medium allows for a covert form of resistance and self-expression amidst the pervasive attitude that it is better to be seen and not heard. The issue of women’s silence and struggle for agency bubbles under the book’s surface until a frustrated Bi, accused of rudeness by her mother, screams obscenities denouncing the importance of having "manners." In contrast, she later remarks to Rita how Kuan likely "grew to quiet her voice, just so she could survive."

Instead of by voice, the women’s emotions emerge through visual art. This trait also serves as a thematic thread for Pixin, from Kuan and her baskets, to Mei’s embroidery on scrap fabric, to Bing’s painting classes, Bi’s cartooning and finally to Rita’s penchant for nature sketches.

Although Bi is the most vocally defiant, and Rita the most vocally curious, visual storytelling as a matrilineal coping mechanism is an apt metaphor here, especially given the medium of Pixin’s work.

While filling in the gaps of her history, men are either absent, peripheral, serve as sources of conflict or trauma, or provide a bridge between the mothers and daughters. Kuan adopts Mei, an orphan, and her suitor disapproves, likely unaware of Kuan’s own experience of being separated from her family. Bing mourns an absent father, and has little time to pursue her painting owing to twin brothers frequently left in her care. Bi’s relationship with Bing is difficult, with Bi’s gentle father often serving as a mediator between the two. Rita remembers her grandfather fondly, and their brief scenes together are especially affecting.

For Pixin, there is hope amid "the missing pieces and stories," as Let’s Not Talk Anymore crafts new bonds out of old family wounds by visually honouring the women who were not afforded the space to heal theirs.

Nyala Ali writes about race and gender in contemporary narratives.