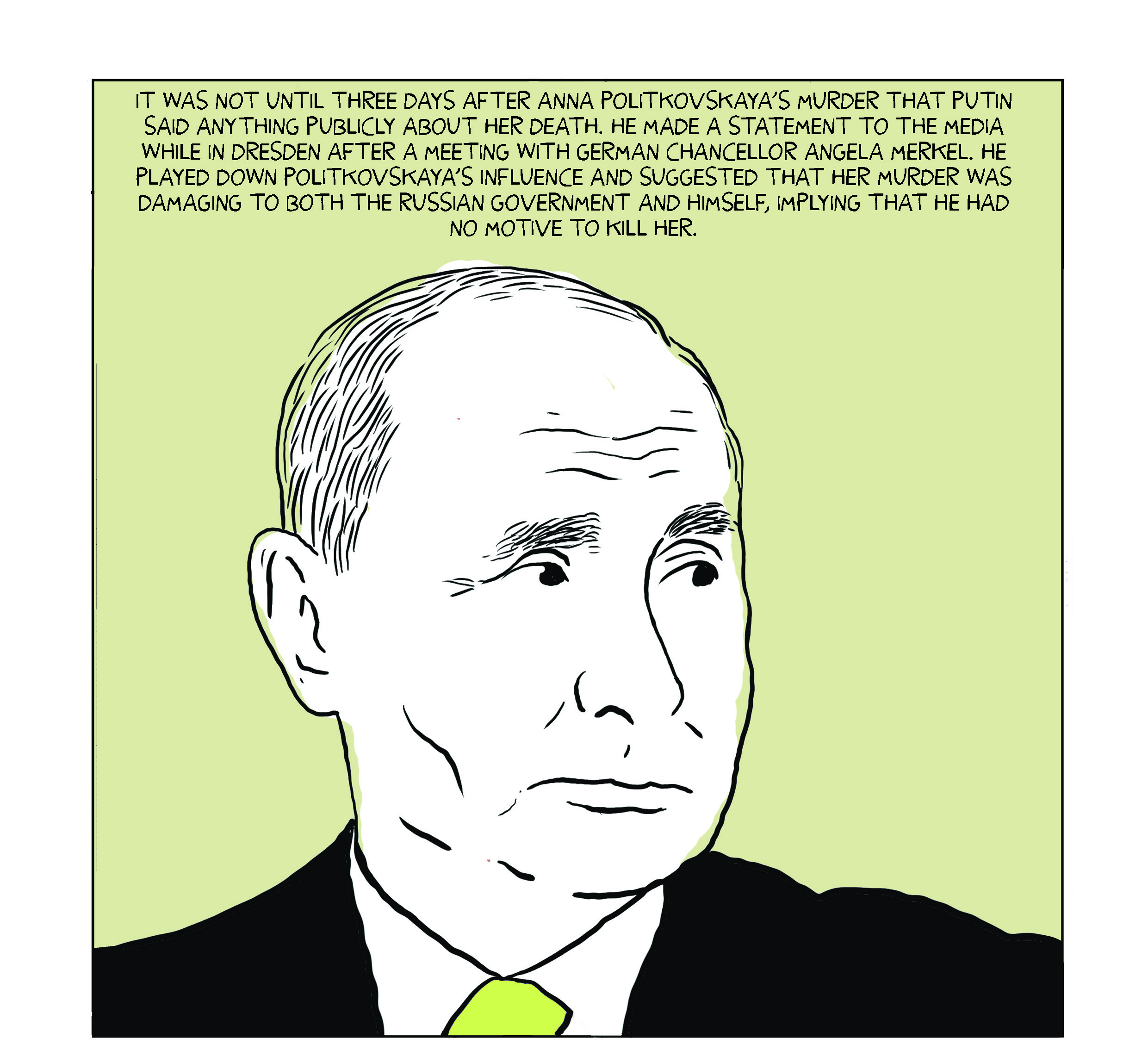 New Graphic Biography Is A Timely Reminder That Putin Is Terrible

As Russian troops mass at the border with Ukraine in the latest international crisis, the media is full of commentary about what can be done to dissuade Russian President Vladimir Putin from his latest scheme to reclaim his country’s former hegemony. Putin has been a player on the world stage for more than two decades now, and that longevity has given his regime a sense of inevitability if not legitimacy. His rise to power and the extreme measures he’s taken to stay there tend to get lost in the mist, with some in the West even arguing that his goals and methods deserve our sympathy.

That’s why Putin’s Russia: The Rise of a Dictator by graphic journalist Darryl Cunningham, published this month by Drawn & Quarterly, is such a timely contribution to the discourse.  Cunningham’s thoroughly researched and chilling accounting of Putin’s bloodstained career is a necessary reminder of the kind of man the world is dealing with, and why the lens of geopolitics might not be sufficient to understand Russia’s behavior on the world stage.

Cunningham traces Putin’s life from his childhood as a schoolyard bully in Leningrad to his service as a Soviet-era bureaucrat in the KGB. Once the Soviet Union fell in the early 90s, Putin had a knack for attaching himself to people who could advance his career and move him closer to the center of power. By the time Russian President Boris Yeltsin had declined into an alcohol-soaked caricature, Putin was ready to step in as Prime Minister and become Yeltsin’s designated successor in 2000.

The book chronicles how Putin spent his early years in office consolidating his power, systematically eliminating sources of dissent (from journalists and opposition parties) and competition (from Russia’s corrupt and wealthy oligarchs), while botching some of the crises he faced from terrorists and separatists through his cold-blooded disregard for human life.


Putin’s Russia paints the picture of an autocrat driven by single-minded pursuit of power, wealth and prestige, whose every act is calculated to advance his own interests. Putin has heretofore managed to use violence with surgical precision to silence and intimidate his enemies, rather than resort to gross and large-scale atrocities – the current situation in Ukraine notwithstanding. Because he presents himself as ruthless but not fanatical, his abuses have been papered over by those inside and outside Russia who admire or benefit from his manipulative moves. After reading Putin’s Russia, one is left convinced this is a dangerous mistake.

Cunningham manages to accomplish all of this in 155 fully illustrated pages, (supported by 5 tightly spaced pages of references) and lands his book on the shelves just in time for a panic-driven surge of interest in the Russian strongman as he is attempting to flex his muscles toward his neighbors and Europe. That accomplishment, however, comes at a small cost.

Typically there is a tradeoff in the world of graphic nonfiction: timely, deep, or artistically ambitious, pick any two. Derf Backderf’s Kent State book from 2020 was meticulously documented and brilliantly well-realized as comics, but it was years in the making. Many lavishly illustrated graphic biographies of artists, musicians or public figures come out on schedule but don’t add anything to our understanding of the topic. In the case of Putin’s Russia, it’s the cartooning that takes a back seat.

In fact, it’s not exactly accurate to call it cartooning. Cunningham’s loose and evocative drawings function more as spot illustrations for each panel of text. They are appealing to look at but there’s rarely continuity between the images or much attempt to conceptualize the material in visual terms beyond the most obvious show-and-tell.

It’s probably best to think of the comics-style format of the book as a design decision to simplify the reading experience. Putin’s Russia can be read in one or two sittings. It’s hard to imagine a prose book on the topic with a similar payload of facts, research and insights that could do the same. The problem is, the perfunctory illustration choices — mostly talking heads or redrawn news photos — start to feel vaguely condescending, as if the reader were being offered a tasty visual treat in exchange for eating their dour, newsy vegetables. That’s an unfortunate impression to leave, given the deadly serious nature of the subject matter.

Overall, the timeliness, thoroughness and devastating conclusions of Putin’s Russia more than make up for not taking maximum advantage of the comics medium. This is an important book that can get everyone up to speed on the grisly facts and trail of bodies piled up under Russia’s leader, and serve as a counterargument to those who try to hold his regime up as a viable alternative to liberal democracy.

Putin’s Russia: The Rise of a Dictator, will be available February 15, 2022.
Putin's Russia
Darryl Cunningham

As Russian troops mass at the border with Ukraine in the latest international crisis, the media is full of commentary ab...

Four D+Q Winter 2021 titles among The Beat's most anticipated

It’s unfortunate, but Darryl Cunningham’s newest comics history could not have arrived at a more appropriat...