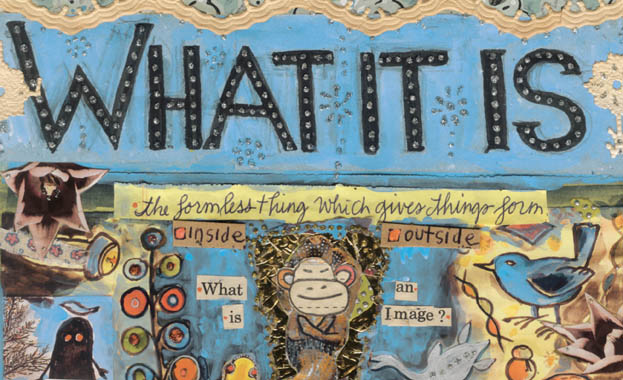 WHAT IT IS reviewed by Time Out Chicago

Lynda Barry uses comics, collage and the kitchen sink to get things going.

Lynda Barry has thought long and hard about the forces that hinder creativity. The painter, writer and nationally syndicated cartoonist, who created the pitch-perfect strip Ernie Pook's Comeek, believes there are two questions we ask ourselves that take the joy and ease out of art making: Is this good? and Does this suck?

"Anytime I begin to make anything, from a painting to a salad, the question of whether it's good or bad seems to immediately swoop in like a vampire," Barry says. "I don't think that these questions can be eliminated, but I do think they can be named and identified as part of [what] happens when adults make something."

Her new book, What It Is (Drawn and Quarterly), thoughtfully guides and invigorates adults who make stuff. It is, among other things (illustrated autobiography, philosophical quest), an instruction manual for dealing with vampiric self-critique. The key, Barry explains, is being okay with not knowing whether something you made is good or bad, but instead working to recapture a childlike, unselfconscious sense of playâ€”focusing on images, letting the stories come to you.

At the book's outset, Barry recalls her childhood games and creative escapes. Using collage, comics and beautifully illuminating scraps of text from old children's books and worksheets (salvaged from the garbage of a Wisconsin school teacher), she describes her early forays into drawing, storytelling and imagining. She recalls nights of getting lost in the fairy tales of Hans Christian Andersen and the Brothers Grimm, afternoons of waiting for her toys to blink and come alive, if only she waited long enough. "I believed that there was another world that would show itself to me in the smallest ways," she writes.

Barry goes on to explain that around age 10, this period of creativity and make-believe was shaken by the idea that people could be "good" or "bad" at artistic expression: "By then I knew who the best artists were in our class, who were the best writers," she says. "The rest of us started wishing. 'I wish I could draw. I wish I could write. I wish I could dance.' By the fifth grade, most of us knew it was already too late." Suddenly, the all-consuming two questions entered the psyche, and creative activity became a kind of wrestling match.

But as a student at Evergreen State College, Barry took a painting class called "Images," in which she began working with unexpected memories. Rather than trying to drum up an idea or concept, she attempted to get inside an image, examining a familiar person or place with fresh eyes. This act required patience and practice, much like staring at toys and waiting for them to move.

"It's an experience, not a thought," Barry says. "Parts of the brain relating to sound, balance, spatial relationship, vision, smell and emotion are all active during certain kinds of memory."

Realizing that unexpected memories might enliven her writing as well, she eventually applied these techniques to other media. Barry even began teaching a workshop about images called "Writing the Unthinkable." The latter half of What It Is explores the curriculum of this class in colorful detail. "Do you wish you could write?" she asks and then follows up with a series of steps to "Make Writing!!"

As a creative handbook, What It Is takes a refreshingly unambiguous approach. Open-ended questions and swirling collage give way to simple advice and concrete steps: Don't stop and think; keep moving your pen. As such, this book isn't just for Lynda Barry fans or writers or people who felt the crush of fifth-grade peer pressure; it's for anyone who has ever wondered how to make something truthfully and honestly and, in so doing, silence the vampires.

Barry will tell you What It Is Thursday 12 at the Hideout.

What It Is
Lynda Barry