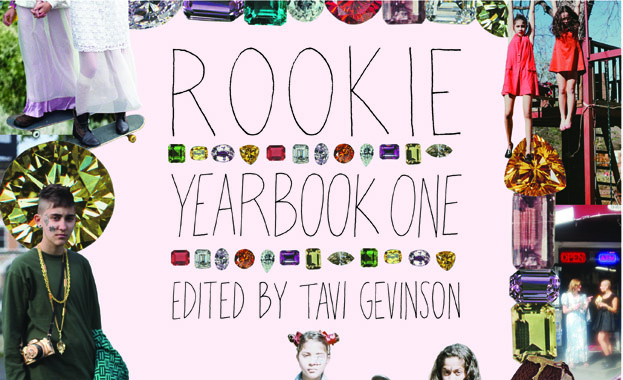 Maybe you have heard about Rookie, and maybe you haven't. I, personally, have had my eye on the site since before it launched, and have a undulating snow globe of emotions about it. Basically, it's a general purpose fashion, entertainment, sexual/emotional health, etc. site for teenage girls that's run by Tavi Gevinson, a teenage genius who sprouted up in the suburbs of Illinois, and has since made every female journalist feel a wonderful mix of inferior, and awe - all in the best possible way. She's referred to as "young boss," or "tiny boss" by her staff, and, just as an aside, has what I consider to be the coolest voice in the history of voices.

I have felt the need to take a few steps back from my public love of Rookie, because a certain someone who I used to touch parts with writes for them. (You didn't think I WOULDN'T bring that up, did you)? But then I decided that was stupid because my needs and interests trump everything else, and I'm compelled to share them with the world, whether people care or not. When I found out that they were releasing a book, I had to have it, so I emailed Anaheed Alani, Rookie's Editorial Director, and she passed me along to Lauren Redding, the Managing Editor, and within a few days, a big, beautiful box landed on my desk at VICE HQ. At first I didn't know what exactly was going to be in the box, because I get a shit ton of mail, and it really could have been a blonde wig made out of human hair, a chicken foot, or a paper mache craft of some sort - sent from someone on death row. It ended up being the Rookie book! When I opened it, the girls sitting near me actually made noises of joy with their mouths, and Ben, my man friend who sits to the left of me, made a "pffft" noise.

This book is beautiful, and is quite thick. It also includes a page of stickers, and a paper crown, which made me delirious with pleasure upon discovering. Normally, when reading a large anthology of writings, varied in length, it's normal to sort of jump around and read whatever immediately catches your eye, but I've been reading this book cover to cover like it's the Bible, but real, and more relevant. My favorite so far, if I had to pick one thing, has been Hazel's interview with John Waters.

I interviewed a few of my co-workers to get a better grasp on what emotions they experienced when I received the book in the mail. Here's what they said:

I can't recall any emotion other than insane jealousy. Of you for getting the coolest shit in the mail, and of Tavi who, at her 14 or 15 years of age (how old is she now?), is already more accomplished than I will ever be. And then flipping through the book I was all like, "Man, I kinda wish these girls were my friends when I was in high school. Would've been a step up from the emo crazy cutting chicks I was hanging out with back in the day. Actually, they may be cooler than most of my current friends..."

It's always fun when the mail comes by because, hands down, you get the best stuff in the office ie. Debbie Harry Barbie, death row fain mail, etc., and the gamut is always so wide. When the Rookie book came in I felt the green monster rise inside of me, but then I was just in awe. You always get cool shit.

It's like Tavi waited until I became a "20-something" to make being a teenage girl something that isn't disdainful. Whatever, Tavi. I'm still the "Girl Reporter" around here, and if I want to squee at the Rookie Yearbook until my elderly lungs give out, that's my inalienable right.

So, there you have it, I'm special. But more importantly, the Rookie Yearbook is as impressive as it is inspiring and entertaining, and you should own it. Buy one HERE.

Ps. Tavi, we want to be best friends with you, and it is real. Come to VICE and have snacks with us.