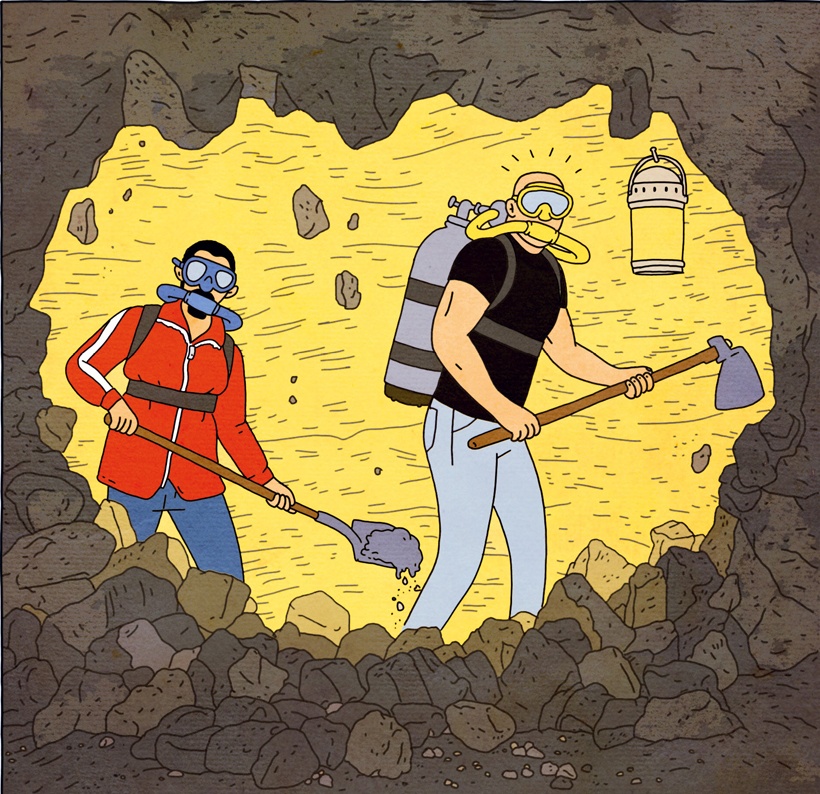 Tunnels reviewed in The Guardian

In Tunnels, Rutu Modan’s long-awaited new graphic novel, a fiery single mother called Nili returns from the US to Jerusalem, where her father, Israel, once a distinguished archaeologist, languishes at home, his life stolen by dementia. But Nili, abrasive and determined, is no nurse. Her mission now is to protect her father’s legacy from Rafi, his rivalrous colleague at the Hebrew University. Though only an amateur digger herself, she will attempt to find the long lost Ark of the Covenant, an object in whose existence her father has always believed, and whose location he once thought he knew.

Naturally, she isn’t the only one chasing this chimera. The race is on. To her horror, her brother Broshi is working for Rafi, now in possession of a tablet whose inscription possibly describes the Ark’s hiding place in an Arab village called Al-Karim, once the site of a Judean settlement. On the plus side, however, she has a financial advantage in the form of Abuloff, a dubious dealer in antiquities whose entire collection was recently donated to the university (and with it, the aforementioned tablet). Furious at Rafi’s double dealing – he and Broshi chose not to tell him about the importance of the tablet – this shady figure will fund her excavations, which must, it seem, take place beneath the wall that separates Israel from the West Bank.

How to describe this complex and thrilling book? Think of it as Raiders of the Lost Ark as reimagined by a feminist Hergé, with a few light top notes of Raja Shehadeh thrown in for good measure (the latter being the Orwell prize-winning Palestinian lawyer who writes about hiking in the occupied territories). Every page is gripping, every frame profoundly political. If Modan has given us a tightly plotted adventure story, she has also delivered a brilliantly daring satire, evenhandedly sending up both rightwing Israeli settlers (several join Nili’s team at her dig, believing that if Judaism’s most sacred artefact is found it will prove their connection to the land once and for all) and Islamic extremists (the book’s chilling ending, in which one protagonist finds himself a prisoner, brings to mind the final scenes of Evelyn Waugh’s A Handful of Dust). Her gaze spares no one: even Nili (especially Nili) is a pain in the backside.

Historic Palestine is the most excavated country on Earth. But to what end? The ceaseless digging of its archaeologists sometimes seem so futile; by attempting to prove the unprovable – to use shards of pottery and ancient coins to stake the historical claims of one party over another – it continually postpones the moment when, as Modan puts it in an afterword, the old competing stories will finally be replaced with a shared narrative, one fit for the present moment (and by extension, peace). To have built such a wonderfully witty and enjoyable comic on such vexed territory is quite some achievement. But then, Modan is a uniquely talented artist and writer. Like her last book, The Property (2013), I expect Tunnels to win all the prizes, and to be read and reread for decades to come. Already, it seems to me to be a kind of urtext when it comes to certain aspects of contemporary Israeli life: not a tablet of stone, exactly, but a volume that comes with all the authority such a phrase implies.