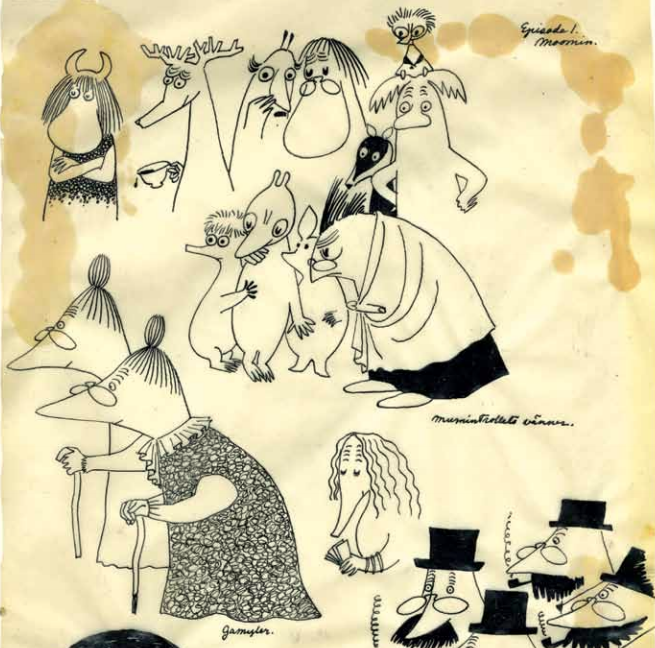 Tove Jansson profile in The Guardian

In 1964, when she was in her 50s, the Moomin creator Tove Jansson settled on her dream island. Klovharun in the Finnish archipelago is tiny – some 6,000 sq metres – and isolated, “a rock in the middle of nowhere”, according to Jansson’s niece, Sophia. It has scarcely any foliage, no running water and no electricity. Yet for Jansson, it was an oasis.

For 18 years she and her partner Tuulikki Pietilä spent long summers there, heading out from Helsinki as soon as the ice broke in April, leaving only in early October. The island meant “privacy, remoteness, intimacy, a rounded whole without bridges or fences”. Klovharun encapsulates something of Jansson’s originality as an artist and writer – and her human presence. Her illustrated Moomin books, which began to be published just after the second world war, brought her phenomenal acclaim and devotion. The tales of amiable troll creatures have been taken to generations of hippy hearts; their pear-shaped faces have adorned a million ties. Their marketing triumph – in which Jansson enthusiastically participated – has overshadowed her other achievements as a painter, novelist, short-story writer, anti-Nazi cartoonist, and designer of magazine covers. Success may also have obscured how ambivalent she was, how often on the cusp of identities. She was brought up in Finland speaking Swedish, had male and female lovers, told her stories in pictures and in prose, lived on water as well as land. More and more she appears as a pioneer. Not least in her crystalline descriptions of the natural world. In the last decade nature writing has surged in Britain, and proved extraordinarily varied.

Tove Jansson’s writing is different. She has wonderful passages in which entire landscapes are made by peering at blades of grass and scraps of bark. Yet her main Moomin adventures are startlingly catastrophic. For all the light clarity of the prose – which is comic, benign and quizzical – these books show places gripped by ferocious forces, laid waste by storms and floods and snows. They speak (but never obviously) of characters resonating to the winds and seas around them. They include visions that now read like warnings of climate change: “the great gap that had been the sea in front of them, the dark red sky overhead, and behind, the forest panting in the heat”. Advertisement There is some relish in these extremes: Jansson loved a storm and her island aesthetic is distinctive. Anti-lush, sculpted by the elements rather than softly shaped by a human hand. This is not like living in a garden. Everything is provisional, prey to winds and fogs and being swept away. It is the outdoor equivalent of chucking out your chintz. What’s more, this is writing about nature that provides not only wonder and leisure but a living. Jansson and Pietilä worked hard to support themselves on Klovharun: they chopped wood, made fires, rowed boats, gutted fish.

Their attitude reminds me of James Rebanks, the inspiring Cumbrian sheep farmer, who points out that while visitors look at the fells and hills and see beauty, his fellow farmers see sustenance, income and labour. Improbably but convincingly, two museum curators have found in an area of north London an echo of Jansson’s island. Looking at a photograph of Klovharun, Mhairi Muncaster and Alison Williams noticed a surprising resemblance to Walthamstow wetlands nature reserve, where a network of reservoirs contains islands named after colonies of birds: Cormorant Island, bleak because of the bird poo, with huge rocks and skeletal trees, is particularly similar. Tove Jansson in the 1930s. Tove Jansson in the 1930s. Photograph: Per Olov Jansson They hit upon the idea of a two-part festival that aims to shine light on Jansson’s and Pietilä’s island life and work. Its title echoes Jansson’s response to DH Lawrence’s 1928 short story The Man Who Loved Islands. “How about,” Jansson suggested in the spring of 1963, “the woman who fell in love with an island?” An exhibition of original work by Jansson and Pietilä will be held next year at the William Morris Gallery; most of Pietilä’s work – she was a graphic designer – has never been seen outside Helsinki. The paintings will include landscapes and an abundance of self-portraits. Muncaster explains to me on the phone that one of the main themes will be “natural disasters”, a driving force in the Moomin books.

A couple of years ago, she and Williams visited Jansson’s Helsinki studio, shown around by the family. “All her things are still there,” and “on the toilet door there is this collage of disasters”, most memorably a picture of an erupting volcano. Pietilä, too, “seems to have been interested in disaster. A lot of her work references war, forest, fire, flood.” Advertisement Meanwhile, next month a family trail, aimed mostly at children, will lead visitors through the Walthamstow wetlands: they will be guided by Moomin footprints and cut-out figures; a Victorian engine house will be used to display photographs, taken by Tove’s brother, of the women in the cottage and outside on the island. The Orcadian composer Erland Cooper is composing a soundscape, bringing together keyboard music with field recordings – wind and birds and sea and the creaks from within the hut – recorded on Klovharun. Sophia Jansson will be heard reading her aunt’s essay, The Island, in which she conjures island colours – cobalt, Naples yellow, black silhouettes – and island fears. There is “stirring in the dark”, “peculiar sound sensations”: elusive laughter and howls and voices. Sophia Jansson vividly remembers the simplicity and the welcome of Klovharun where, while her father talked Moomin business with his sister, she wandered around the island dipping into rock pools. The planks of the cottage had darkened with age and taken on, as she tells me on the phone from Finland, “an orangey yellow tinge. To emphasise that, they had an orange bedspread and a blue carpet. The colours melted together – it always felt warm.” Like the lighthouse that the author hymned in Moominpappa at Sea, the hut’s one room had windows facing in all directions so that Tove and Pietilä could watch the horizon from 360 degrees, and see the winds and storms coming and going. Seated at separate desks (in Helsinki they lived in separate apartments joined by an attic corridor), they “got a lot into the day”.

The diet was plain: hard bread, butter, cheese, fresh fish, canned everything else. It was “almost camping”. Sometimes totally camping. While waiting for the house to be built, the women put up a tent, but when the house was ready “they liked the tent so much they decided that they would go on sleeping there, and let guests stay in the house”. Still, Jansson was no hippy. “I’m feeling pretty cocky,” she wrote when besieged by TV crews in the 1960s, “but also trying to maintain my image: gentle, cultivated, enraptured child of nature.” You can see her acuteness in her paintings: witty, immediate, contemplative. In her diaries a quick wild sketch from 1931 shows a woman with high heels and orange hair walking in moonlit Stockholm. The canvases include wonderful self-portraits, of Jansson smoking, Jansson in a boa and Jansson in her 20s wearing a fur hat like Rembrandt’s; she also produced a picture of a Moomin posing like Rembrandt.

Watercolours and sketches exult in the natural world: in its rousing freedoms, seen in the birds soaring over a Moomin conversation and in its momentary calm, as shown in the watercolour of an idyllic island, painted for a Swedish book cover. The black-and-white illustrations to the Moomin books conjure up wind-borne snows, cliffs that rear up like waves, and waves that look as adamantine as rock. The paintings are very well caught in Zaida Bergroth’s Swedish-language biopic, Tove, which concentrates on the writer’s love affairs with men and women before her life with Pietilä, in particular on an intense romance with the female director who put the Moomins on stage. Rich in russets and golds, with a lovely candid central performance by Alma Pöysti, the movie evokes a skint, open-hearted, troubled Scandi bohemia. A lover is seen by the landlady tucking himself into his trousers while Jansson offers a canvas in lieu of the overdue rent.

The beloved Moomin characters, clockwise from top left: Sniff, Moominpappa, Moominmamma, Moomintroll, Mymble, Snorkmaiden, the Hattifatteners, Snufkin. Some of the beloved Moomin characters, left to right: Sniff, Snufkin, Moominpappa, Moominmamma, Moomintroll, Mymble, the Groke, Snorkmaiden, the Hattifatteners, Sorry-oo. Advertisement Jansson created books that are unlike any others written for children or adults, though Roald Dahl was surely tipping his Scandinavian hat to her when he produced Charlie and the Chocolate Factory. Nineteen years earlier, in 1945, Jansson had created a confectionery landscape in her first Moomin book, The Moomins and the Great Flood, with snow ice-cream, finespun sugar grass and chocolate-bearing trees.

They avoid all the pitfalls of children’s books of the period. They are not anthropomorphic, or sentimental, or facetious. They are marked by the experience of war: by seeing houses reduced to rubble and families roaming through ruined landscapes looking for somewhere to settle. There is fear in them. Yet no moral cosh hangs over these books. There is no hero worship, no demonisation, no punitive framework of the kind that ruins The Lion, the Witch and the Wardrobe. There is not just one tribe around the Moomin table: there is no right way to be – or to look.

Jansson’s lovely sprinting drawings are as welcoming to the Moomins with their pot bellies as to the spiky independence of Little My – another kind of troll, small enough to get lost in a sewing basket, who is given to “monotonous wet-water songs” and to fizzing furies: “Every little creep has a right to be angry,” she points out. And goes on peeling potatoes with her teeth.