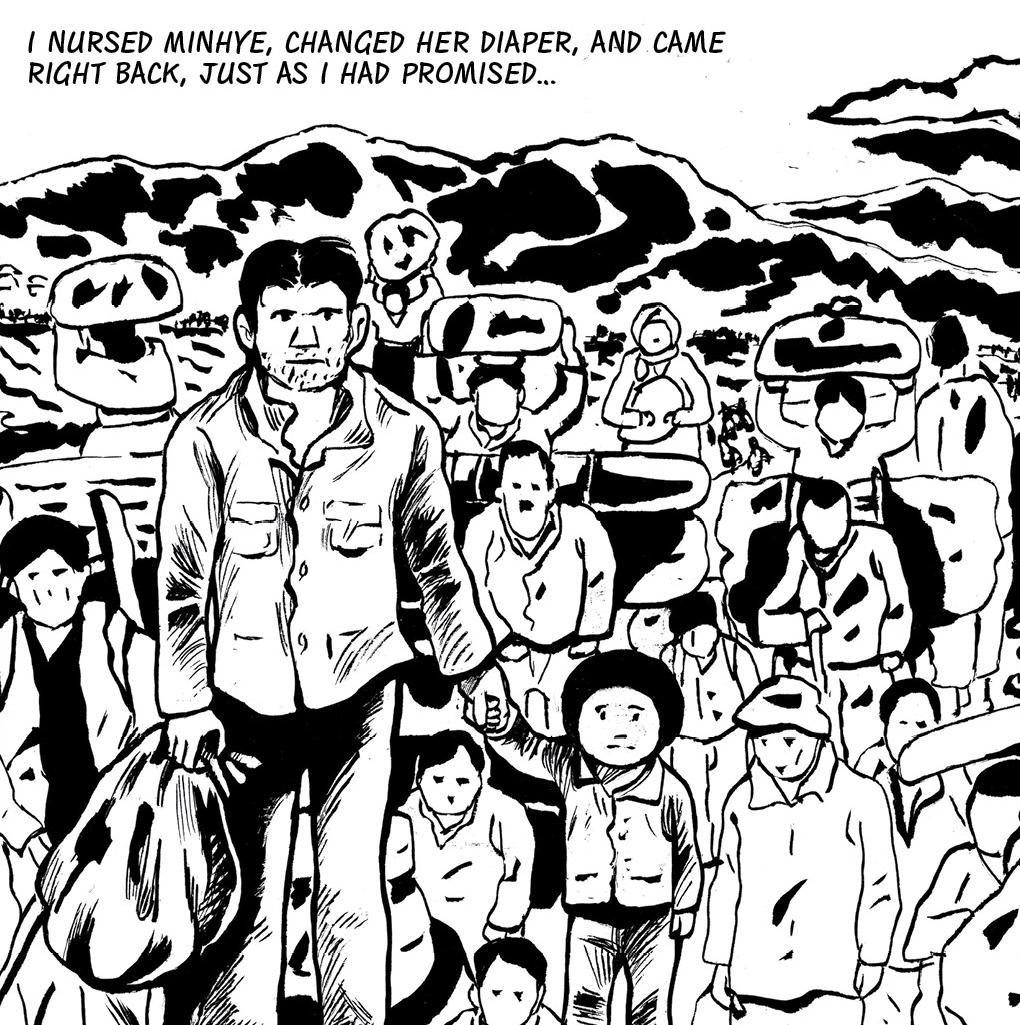 The Waiting reviewed: “Radical and naturalistic”

South Korean comic artist Keum Suk Gendry-Kim really began to think about her identity while she was studying art in France in the early 2000s — fielding question after question from uninformed locals sharpened her sense of the divisions and the lack of resolution in Korea's history, and her own.

The Waiting, her latest work since Grass — a 2019 critically-acclaimed graphic novel on the plight of a Korean woman forced into sexual slavery by the Japanese during WWII — continues Gendry-Kim's unflinching portrayal of the displacement caused by war, migration, and bias.

It was during those years abroad that Gendry-Kim learned her mother had a sister who might have been living in Pyongyang, North Korea. Before the Korean War, her mother's family had taken a trip north from their home in Jeolla Province, South Korea, stopping in Pyongyang along the way. Her mother and the rest of the family later returned south — but her aunt somehow remained in the North. Prior to her mother's revelation, Gendry-Kim had had no awareness that this separation was part of her family history.

The Waiting, while inspired by the author's family account and two other historical records, is constructed as fiction in depicting the story of Gwija, a North Korean woman who becomes separated from her family while marching south during the war with a group of refugees. After briefly extricating herself from the group to nurse her infant daughter, she loses sight of her husband and three-year old son, never to see them again.

Since the chance for actual reunions between long-separated family members is infinitesimal — those chosen by the government's annual lottery account for only 1.5 percent of the total number registered — The Waiting reveals, via fierce brush strokes that often seem to explode from its frames, the longing and resentment suffered by those whose lives are held hostage by the past. Arriving in Busan, South Korea, Gwija eventually marries another refugee also bereft of family, but for a young son who reminds her of her lost son. Years later, she heedlessly tells the daughter born of this second union that her Southern marriage — despite its mutual sustenance — is simply an expedient arrangement, from which either partner can freely exit the moment he or she finds their original family.

As if to correct this neglect of the present — which over time has become Gwija's permanent choice in contrast to her distant past — Gendry-Kim adopts a non-linear approach that's both radical and naturalistic, to illustrate what unfolds in her protagonist's daily life when her other life is put on hold. While fully acknowledging the plight of biological family members separated along the North-South border during the Korean War, The Waiting also celebrates the beauty of found-family bonds forged to mitigate the destructive forces of history.

Specifically, Gendry-Kim's graphic narrative depicts the older Gwija's daily movements — from preparing her midday meal to putting on her shoes — as rituals that seem at once meticulous and impressionistic, the sequential frames both slackened and accelerated by the idea of advancing age. At the same time, by modulating the narrative sequence, the author also affirms the resilient — if sometimes unacknowledged — bond between Gwija and her independent younger daughter. A bittersweet account of an aged neighbor's meeting with her long lost sister from North Korea is punctuated by several pages of black, before opening up to lush, textured foliage of Jeju Island in bas-relief against white space, where Gwija and her daughter joyfully embark on a holiday excursion.

Nevertheless, Gwija's life — even before the Korean War — has already been hemmed in by norms of male ascendancy. The Waiting, in a sense, also represents the painfully slow pace of bringing gender equality to Korean society. Gendry-Kim's former dislocation has become a catalyst for her artistic endeavor: "Because I'm a woman and I've grown up watching my mother and sisters face gender discrimination in a patriarchal society, I feel determined to tell stories that center on women," she said in a recent interview. The Waiting vividly captures Gwija's chronic deprivation — how she is not allowed to attend school like her male siblings, how she and her mother often have to eat bony fish heads while her father and other male family members get the choicest morsels, how the longing for her son and transferred affection toward her stepson prevent her from truly appreciating both the daughter from her first marriage and the one born of her "makeshift" union.

Janet Hong, Gendry-Kim's English translator, admits she similarly gravitates "toward stories that feature broken, imperfect people ... the neglected, the marginalized and the disenfranchised." Both author and translator understand the power of images in the comics medium, how serious topics — the way both war and patriarchy result in endless exile of the vulnerable — can be made accessible to a wide audience and serve as effective instruments for change. And while words presumably take a secondary role to images in a graphic novel, their "silence," crafted by a perceptive translator in step with the artist's powerful visual representation, cuts deep.
The Waiting
Keum Suk Gendry-Kim