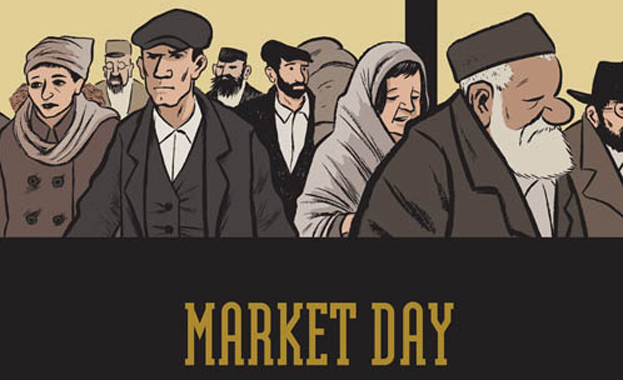 Emanata: A Sense of Where You Are

James Sturm's splendid new graphic novel Market Day also makes a great deal of its sense of place and time, although it doesn't specify exactly when and where it's set--it's a fable, rather than a piece of invented history--and Sturm takes a radically different approach from Weaver in drawing its settings. It's about a weaver named Mendleman, evidently an Eastern European Jew sometime around a century ago, going to the market to sell the beautiful rugs he's been making. He's a slow, painstaking worker who's constantly imagining how to turn the experiences that affect him most powerfully into abstract designs, woven sixteen ends per inch. The market, on the other hand, has no use for beautiful, expensive, handmade things, and Mendleman discovers that the forces that made it possible for him to survive as an artist have suddenly ceased to function the way they used to. (In other words, Market Day could just as well be a story about a modern-day artist and Walmart.)
The book's setting is circumscribed by a few hours' walk, and the sort of technology its characters care about most might be a well-made pair of boots. Sturm draws houses as a few straight lines, as simple as wooden planks; a field is an expanse of empty space punctuated by a few scribbles of grass (the sort Charles Schulz used to draw in "Peanuts"), or the silhouetted brambles of a bush. A grandfather clock made by the hand of a master is drawn with perhaps a dozen strokes of Sturm's pen--Mendleman understands its craftsmanship, so Sturm doesn't have to prove it to us. There are a few big, full-bleed, two-page establishing shots in Market Day, which also underscore the book's quiet tone: a man and his mule and cart silently crossing a stone bridge just before dawn, a flat field where two men are sawing wood, a few dingy market stalls at night. Mostly, they show us space and color, the openness of the world where Mendleman lives and the way the rise and fall of the sun sets the pace of his days.

That simplicity is the link between Sturm's art and his protagonist's. One of the book's most thrilling passages comes early on: as Mendleman strolls through the marketplace, he imagines how its visual chaos could "all come together as a single rug." Over the next few pages, Sturm simplifies the scene before his weaver's eyes, makes it symmetrical, turns it into a geometrical design (with its black areas drawn line by tiny line, like a rug's threads, rather than simply filled in), and then follows Mendleman's consciousness as he returns to what's actually in front of his eyes. The weaver's wife, he says, "teases me that I live more fully in the world I imagine than the world I live in."
They're the same, of course--the one he imagines is the one he lives in, transformed by his prayerful art. Everything we can see of Mendleman's little world is a place, real or hypothetical, turned into a few carefully placed lines, a matrix of colors as evocative as a weaver's design, a composition that can be glanced at for a moment like a rug on the floor or lingered over with the care of a rabbi contemplating the Talmud.

Exploring the darker side of the supernatural, from acts of blind faith and men driven insane by guilt, James Sturm̵...

Like so many creative professionals, James Sturm wears more than one hat. Both a dedicated comics educator and a critic...