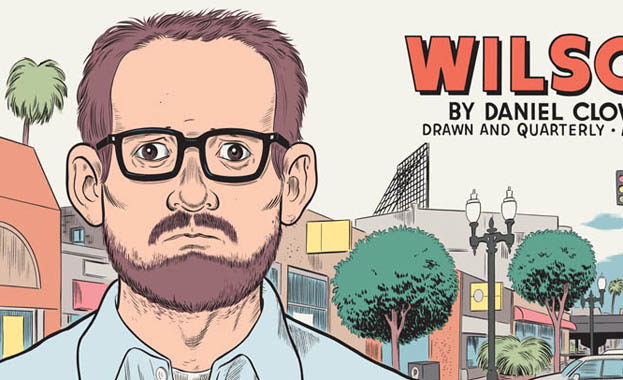 Daniel Clowes’ graphic novel begins with one of the funniest declarations of love ever drawn on a page, funny precisely because it’s so patently false.

“I love people!” exclaims the title character in Clowes’ hilarious story about a terminally anti-social middle-aged man who stalks the streets and coffee shops of Oakland, Calif., dishing out unwanted advice and impolite observations while his own life crumbles around him. Wilson could be called a few L words, but “loving” and “lovable” aren’t among them.

Clowes has mined these veins of misanthropy in other graphic novels, such as “Ghost World” and “David Boring.” “Wilson” is his first original work (the others were drawn from serials), though it’s arranged to look as if pieced together from a collection. Each of 70 pages serves as a chapter in the life of the character, drawn in a variety of styles recalling everything from R. Crumb to Andy Capp.

Each of Wilson’s misadventures follows a predictable pattern: It starts with a well-meaning observation or endeavor that ends badly in the last panel. After declaring his love for humanity, Wilson asks a neighbor how she’s doing, only to ask her if she ever shuts up. A few pages in, Wilson boorishly sits next to the only other person in an otherwise empty coffee shop, because he likes the window seat, only to bother the busy man with inane conversation. Politely ignored, Wilson blurts, “Hey, I’m talking to you!” Actually, he doesn’t say it that nicely.

“All Alone” takes place at a low point in Wilson’s life, a brisk day at a park where he contemplates his solitary state and the mistakes he’s made. A man pushes his little boy on a swing while Wilson thinks: “I didn’t know what I had until it was long gone.” You think it will be a turning point. Then, after a few more deep sighs of rumination: “Hey! Can you get that brat to shut up for two f---ing seconds!?”

Endlessly funny and agonizingly short, Clowes’ book is a literal masterpiece. In fact, it can be enjoyably frustrating to try to pick the definitive page in the book because Clowes refuses to repeat himself, drawing each of Wilson’s episodes differently. They can jump days or years, but in each we see not only a different shade of the character but also a different Wilson altogether. In one episode he may be a normal cartoon human out of a teenager’s comic book. In another he’s more comic-strip, like an escapee from “Blondie.” In yet another he’s been shrunk to dwarf proportions, given a huge nose and beady eyes.

No example of Wilson is exactly the same, and yet Clowes’ technique ultimately helps define the man. We always learn something new about the man, and though it might be painful to admit, about ourselves. Wilson may finally be loveable, not because he grows or changes, but because he embodies our darker tendencies.