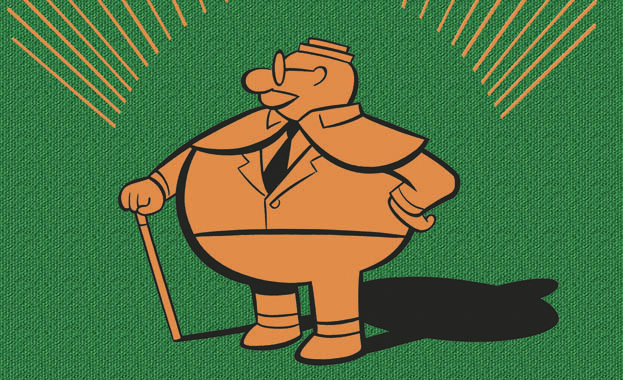 SETH speaks about WIMBLEDON GREEN in the Georgia Straight! (upcoming event in VANCOUVER!)

Superman, Spider-Man, Batman—when I was a child, none of the epic exhalers of thought balloons appealed to me. I preferred the suburban, domestic dramas played out by Archie, Little Lulu, and especially Richie Rich. Why Richie? It wasn’t because he looked good in shorts. Reggie from Riverdale looked good in shorts. No. Richie fascinated because he was loaded. In a sub-basement of my fantasy life—I have never spoken of this till now—glimmered the hope that through some magical intervention he would be made flesh or I would be made ink and he would become my sugar daddy and I would spend the rest of my life being catered to, poolside. It’s a possibility I still rekindle when I find Old Man Trouble hanging round my door. With his pet wolf.

Seth (né Gregory Gallant) is one of the Canadians who’s been leading the charge in the weirdly ascendent world of the graphic novel. His latest, Wimbledon Green (Drawn & Quarterly, $24.95), is a pleasantly fractured account of the doings and dealings of the greatest comic-book collector in the world, the eponymous Wimbledon G. It’s a wry take on the twisted, generalized passion that inhabits any collector, lurking like an alien, subcutaneously, waiting for the ideal moment to burst through the skin; and the specific kink particular to the warped world of the adult male—as they almost always are—who will go to absurd, yea felonious lengths to lay hands on a mint or pristine or even clean copy of Time Twins #1 or Beans Kidney #55 or Mr. Meteor #22, which are three among the many invented by Seth and named in Wimbledon Green.

Seth lives in Guelph. Circumstances landed him there. He liked it and stayed. I spoke to him on the phone and mentioned my Richie Rich obsession, adding that I wished I’d had the foresight to keep them preserved in archival envelopes as a kind of RSP. “You don’t really want that,” he answered. “For one thing, you don’t want to be the kind of guy who would do such a thing. And anyway, they’d only be worth a couple of dollars. Richie Rich just isn’t that sought-after. The big money goes for the superhero comics, the ones that are meant to appeal to an adolescent boy’s mentality. The really rare numbers, where you might find a first appearance by a well-known hero or villain, for example, might fetch hundreds of thousands of dollars.”

“Do any of these people, the really devoted collectors, have a sense of irony about it?”

“It’s not something you’d necessarily expect to find in a 40-year-old who reads Spider-Man every week. I’ve met some who know they’re comic-book nerds and have embraced it, but most of them have very little humour about what they’re doing. They’ve been taken over by this aggressive desire to get things. I’ve been quite literally pushed out of the way at paper shows by someone who just has to get something first, and often for no more reason than that they can’t bear the idea of someone else having it.”

Wimbeldon Green is full of such smudged-around-the-psychic-edges wingnuts, collectors, and dealers with names like Nat of Pulp City Comics, and Capt. Jack, founder of Winnicon, and Al of Comic Crypt. In Seth’s compact, tightly packed drawn pages—there are often 12 but might be as many as 40 panels on any single page—they tell what they know of, or believe about, Wimbledon Green. He’s a man of mystery, amoral and cunning, steeped in legend. He’s regarded by other players in the comic-collecting game with collegial admiration, envy, and outright loathing. He’s portly and bespectacled. He always wears a kind of bowler hat, and a little cape. He carries a cane.

“I’d say that he’s the least calculated of my characters to date. He just sort of appeared in my sketchbook one day. He’s a little like a character I found in an old French book I came across. It’s from the ’30s, by [Alain] Saint-Ogan, about a fat little character, not unlike Wimbledon Green. He gets into messes. It’s done in blue and orange and brown, and I like to keep the tonal palette very simple: greyed-down oranges and greens, in this case.”

“This isn’t the first time you’ve dealt with the idea of collectors. It comes up in your last novel, Clyde Fans, and in It’s a Good Life if You Don’t Weaken.”

“Collecting has always just been such a part of my life. I think it is for everybody, pretty much. Even people who say they don’t collect often do. Lately, I’ve been working on a series of autobiographical sketches, some about childhood, and I’ve been going through a phase of buying back junk I had when I was a kid. On eBay I found a wrist radio, for instance, and a G.I. Joe. It all seemed like a good idea at the time, but as they arrived and I took them out of their boxes—and each time I was expecting a meaningful experience—I was disappointed. They didn’t achieve what I was aiming for. Video-oriented stuff has worked better. I got some episodes of The Friendly Giant and that really did settle on me as an adult in the same way it did when I was child. eBay, of course, has completely changed the world of the collector. When I finally let a computer in the house, I found six or seven things I’d been looking for for years right away. That’s great, but of course there isn’t the same thrill of serendipity as when you just happen on whatever the thing in a store.”

Wimbledon Green, toward the end of the novella, indulges in some “child is the father of the man” reflections. “Childhood images rest at the very core of who I am,” Seth says, and then recalls a game he would play coming home from school, a self-imposed breath-holding challenge based on a fantasy about an astronaut whose air supply was running low.

“Oh, yes,” he says, “that was my game. But I didn’t wear a deerstalker, like young Wimbledon.”

“What did you wear.”

Which is, it must be said, apt and prophetic headgear for someone who grow up to embrace a profession where he would have to walk alone and deliver.