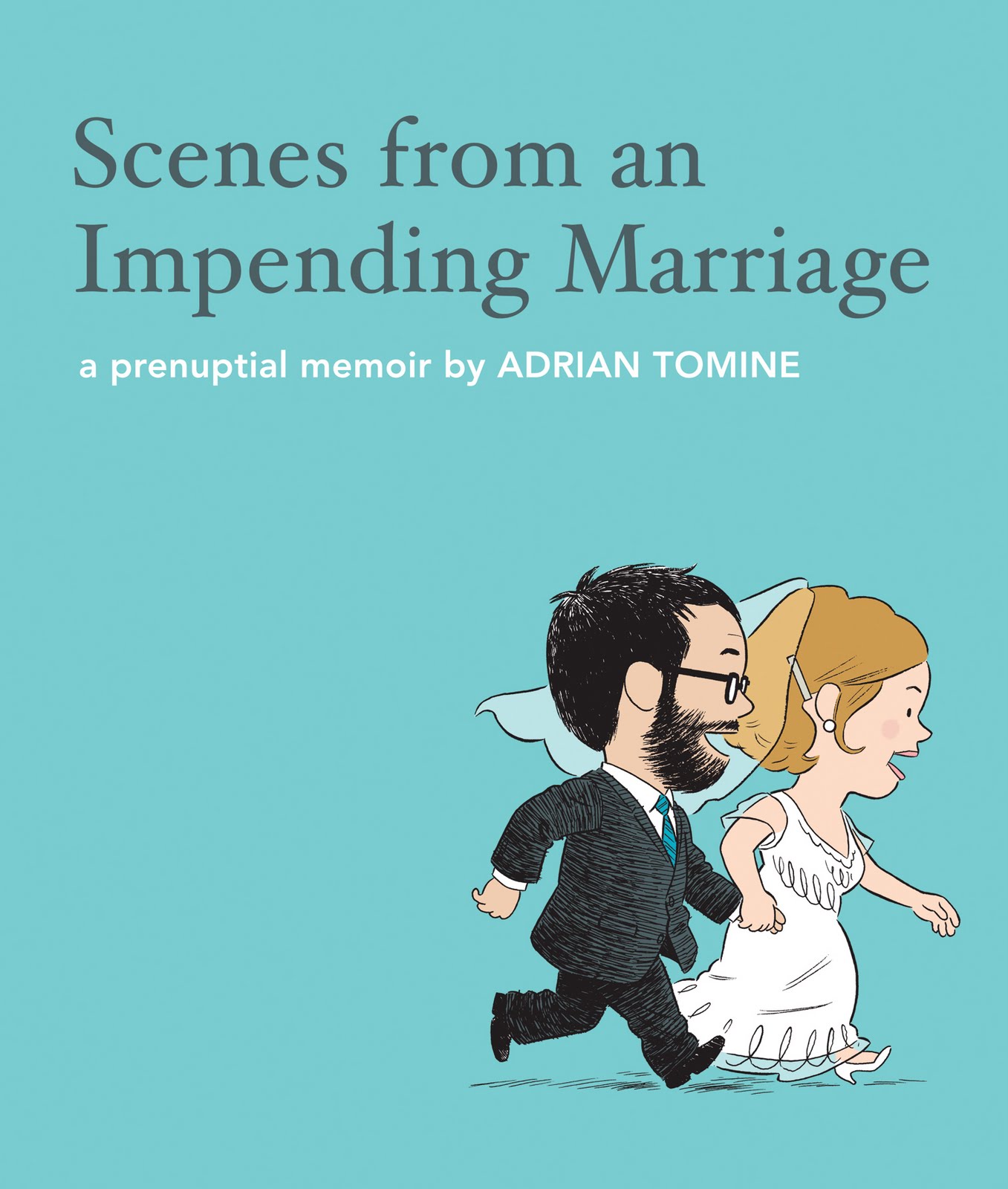 Scenes From an Impending Marriage in the National Post

Scenes from an Impending Marriage

In As You Like It, Shakespeare described weddings as a “blessed bond of board and bed.” However, that line was written for the god of matrimony — like today’s florists, jewellers and stationers, he had a certain bias. I’ve never come close to proposing, but I have seen commercials for those three-months’ salary engagement rings, the ones designed to inflame modern anxieties. Though the bloated wedding industry serves as Adrian Tomine’s comic foil throughout Scenes from an Impending Marriage, this sprightly book never spares its own creator (or his fiancée) for going along with the madness. The graphic vignettes documenting months of frazzled planning turn out to be his breeziest, most immediate work yet, inviting for romantics and formalists alike.

For Tomine, this is a stylistic departure. The cartoonist made his name with austere yet meticulously drawn stories about frustrated, self-deluding young people; even if a particular anti-hero was flailing around in desperation, their body language and surroundings would be almost mathematically precise. Scenes’ nonlinear strips are looser and less realistic: They were drawn in Tomine’s sketchbook after his future bride, Sarah, suggested the autobiographical minicomic as a wedding favour.

That’s not to say these miniatures are unpolished. Alternating between a snug nine-panel grid and full-page jokes, the strips have a fetching slim-lined style reminiscent of Charles Schulz — at one point Tomine simply throws in a direct Peanuts homage. The nonchalant, semi-improvised bent of the cartooning extends to his lettering: Instead of redrawing panels that once mentioned real friends or family members, he just scratched their names out.

When it comes to the betrothed couple, Tomine eschews such discretion. He’s gentler than in past books, but still great at capturing awkwardness. One panel depicts his dancing lessons with Sarah: He’s stepping on her foot, she’s frowning down at it and he’s staring nervously off into space. Encouraged to spend absurd amounts of money and time on every aspect of the ceremony, Tomine and fiancée see themselves falling into a “black hole of nuptial narcissism.” He asks: “Do you think they still need help at that AIDS dinner?”

The pair’s guilt-ridden volunteering ends up happening off-panel. That clever elision is a mark of Tomine’s light touch here: Working with barely 50 pages and what must have been a tight matrimonial deadline, he manages to preserve some nuance even in this happy relationship. Tomine the character is fixated on controlling minute details and is politely curt towards awful wedding DJs, while Sarah tries to remain diplomatic even when faced with inane obstacles like, well, DJ Buttercream.

Every spouse has their limits, though. Wandering through the single person’s hell, a Crate & Barrel store filled with blissful registering couples, the cartoonist finally has a mini-meltdown: “What’s with these bar-code scanners? It looks like everyone’s casually aiming a gun at wicker tissue box holders or whatever! It’s emblematic of our culture: ‘I want lots of stuff, and I want to shoot a gun!’ ” Then his wife-to-be holds him up with a scanner and demands a flatware preference.

In 2005, the Canadian cartoonist Seth published a sketchbook-spawned graphic novel of his own. If anyone saw the unexpectedly whimsical Wimbledon Green as a trifle at the time, they probably don’t now; it presaged a growing vein of dry humour in his characteristic nostalgia. Turning point? Recreational detour? Regardless, I’d be glad to see more Tomine comics like Scenes from an Impending Marriage, even ones that simply elaborate on its stylistic experiments. Constrained by space, time and autobiography, he’s drawn an artistic exemplar of John Donne’s very debatable phrase: “To enter in these bonds is to be free.”