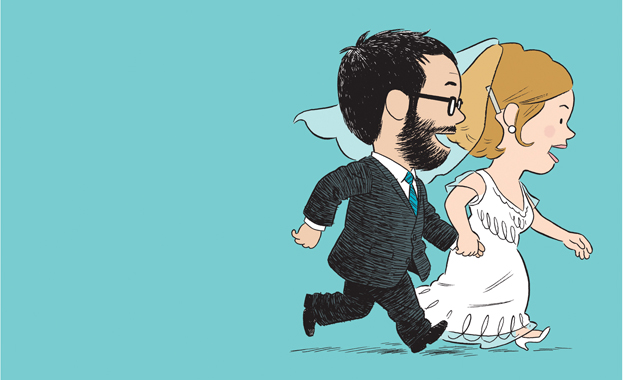 Adrian Tomine's "Scenes from an Impending Marriage: A Prenuptial Memoir" was first conceived as a party favor for guests at his wedding, or at least that's what we're supposed to think. Whether or not this is really true is beside the point, since either way, it offers a useful strategy for thinking about the book.

Tomine has always been a master of the small gesture, as anyone familiar with his work knows. Such encounters motivate the deceptively informal stories in his series "Optic Nerve," as well as his graphic novel "Shortcomings," which explores the limits of identity and intimacy. With "Scenes from an Impending Marriage," though, he seems almost willfully understated, tracing, in a series of offhand comics, the peculiar rigors of the wedding dance, from guest lists to seating charts to invitations and beyond.

That this is the perfect approach to an event that has become fetishized in our culture should go without saying: Tomine's point is not to play into (or even against) perceptions about marriage so much as to particularize his account. It's not even the wedding that's important (it does not appear here), but rather the interaction between Tomine and his fiancée Sarah as they try to create a ceremony that will have meaning for them.

"You need to stop approaching this like you're doing people a favor by not inviting them," Sarah tells Tomine about his reluctance to add to the guest list. "Okay," he replies, "but I also think you shouldn't use this as an opportunity to make amends or re-connect with everyone you've ever known." It's a vivid interaction, made moreso by its kicker -- "Boy ... People would really be appalled if they ever heard some of these discussions," which, of course, suggests the irony and revelation of the autobiographical form. And yet, for anyone who's ever made up such a guest list, the details resonate, highlighting the ability of such a story to extend beyond itself. That's what Tomine does so beautifully, here as in his other work, using his experience to create a portal into our own.

"Scenes from an Impending Marriage" is a short book, barely 50 pages, but it reverberates with an unexpected depth. This is a function not only of content but also of form, which, at times, reflects some unlikely antecedents. A one-panel strip called "Exercise" is reminiscent of the syndicated strip "The Family Circus," with its circular frame. Elsewhere, Tomine and Sarah cry out, "WAAAAAAAHH!!" in exasperation, their heads back and mouths open like Charlie Brown and Sally in "Peanuts."

That's part of the fun of the book, finding the points of reference, as it were. But more essential, Tomine has created a heartfelt, recognizable portrait of the anxiety that surrounds the public declaration of love. "My hero!" Sarah declares on their wedding night, after he goes out at 4 a.m. to bring back food. The two of them sit on their hotel bed, eating and looking at each other. "Holy ....," Tomine says. "We're married."