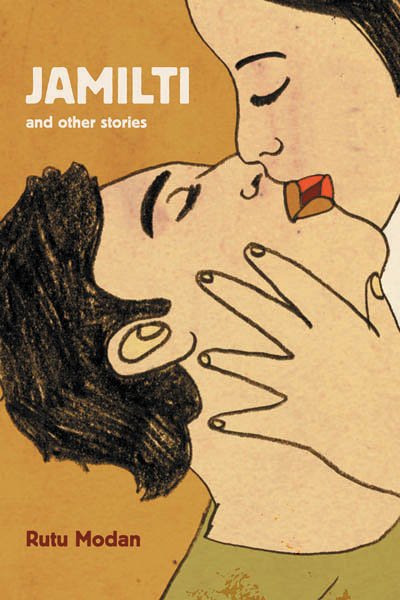 Though I'm sure I'd have to fight pretty hard to prove graphic novels as a medium are part of the literary mainstream, I'd argue that folks like Harvey Pekar, R. Crumb, and more recently Adrian Tomine, are closer to the mainstream than a hardcore science fiction or fantasy writer. Indeed, at the point at which all these guys have been featured in The New Yorker, I'd say their literary pedigree is fairly well established. But what about narrative in serious graphic novels which dabbles in the fantastic while still remaining outside of genre conventions? One of my favorites is the collection by Rutu Modan called Jamilti

Modan's more famous graphic novel is a single narrative called Exit Wounds, but prior to the publication of that book she'd put out these shorter pieces in a variety of outlets. Jamilti collects these shorter pieces into one volume, which arguably highlights some of her best work. Thought not all of these pieces have fantastical elements in them, the two that do are clear standouts among this author/artist's work.

"King of the Lillies" tells the grotesque tale of a plastic surgeon who alters all of his patient's appearances to resemble that of a specific woman named Lilly, a woman he loved. At the start of the story, Lilly is the daughter of a patient who previously died under the surgeon's care. The surgeon subsequently falls in love with Lilly and asks her to live with him which she does for a time, but eventually leaves him unexpectedly. This results in a bizarre quest to transform all of his patients into Lilly. In an odd twist, several of the patients he transforms actually enjoy their new appearance as looking like Lilly is viewed as some kind of perfect ideal. All the new Lillies end up living together with the doctor in a sort of disturbing harmony, complete with matching outfits. The unsettling and surreal quality of the story is only made creepier by the absolutely amazing illustrations.

I'm not the first to point out the relationship between the style Modan employs here and Edward Gorey. This is interesting because she's not limited to only this style, but uses it effectively. There is actually quite a bit of originality to the style, but the muted colors combined with the macabre subject matter certainly call to mind Gorey, as well as the prose of Poe or Lovecraft.

In terms of fantastical musings, the other standout is called "Homecoming." This tells the story of a seemingly senile old man who is overjoyed at what he believes is the return of his dead son. An airplane is circling the home of this family, which the father insists contains Gadi, even though Gadi was shot down in action years prior. The radio reports indicate that the plane is likely a terrorist suicide bomber, but the parents are having none of it. Told from the perspective of the daughter and her boyfriend, the story seems to be a straightforward tale of senile parents holding out misplaced home for a resurrection. At the end of the story, when the plane crashes, a decapitated corpse is indentified by the parents as definitely NOT being Gadi. However, the story concludeds on a wonderful line with the daughter and her boyfriend getting into a golf cart to search of the missing head at which point she says, "I have a feeling we're going to find that it really was Gadi."

This is where, for me, Modan crosses into that area of imagination that makes certain kinds of fiction so enjoyable. Yes, we can take the line from the daughter as a sarcastic one and one that indicates she too is just holding out hope. But there's more to it than just that. At the point at which numerous characters believe a supernatural event is taking place, then for all intents and purposes it might as well be. Because all fiction is ultimately bent around the perspective of the characters, if they believe in magic, then the magic in the story is somewhat real. When I refer to magic here, I don't necessarily mean literal magic, ala Harry Potter, but rather that otherworldly quality that permeates pretty much all fiction, whether it be something as realistic as Raymond Carver, or fantastical like Ursula K. Le Guin. By having surreal and emotional illustrations be part of the storytelling process, Rutu Modan is already acknowledging that what she is presenting to you is fantasy. In this way, the work of a literary graphic novel has much in common with metafiction, which in turn is a sort of cousin to science fiction and fantasy.

So with the stage already set with beautifully disturbing illustrations, when Modan introduces concepts like a lost son back from the dead, or a colony of surgically altered women who all look exactly alike, the emotional results are splendid. If you enjoy Gorey, or Lovecraft, or Poe, you'll love her. You'll also love her if you just like a good short story. And these have pictures!

Jamilti and Other Stories
Rutu Modan