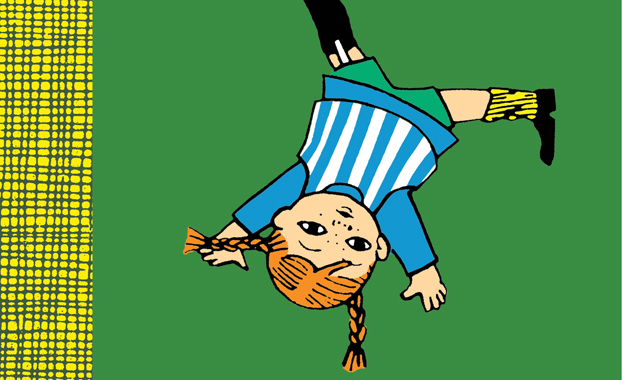 Montreal publisher Drawn & Quarterly will soon have its hands full, thanks to a certain mischievous, pigtailed redhead.

This September, D&Q's children's imprint, Enfant, will release Pippi Moves In, the first in a three-volume set of original Pippi Longstocking comics, written by Astrid Lindgren during the late 1950s, a decade after the Pippi books were published. It's the first time the comics will appear in English, and an introduction for many fans to the drawings of Ingrid Vang Nyman.

The series of four-page Pippi comics originally appeared in the Swedish version of the kids' magazine Humpty Dumpty from 1957 to 1959. Nyman was also the original illustrator for the first three Pippi books in Sweden, but while Lindgren went on to become an internationally celebrated children's book author, Vang Nyman, who suffered from mental health issues, committed suicide in 1959.

Several other artists have illustrated the Pippi books over the last 67 years, most notably Louis S. Glanzman, but D&Q's creative director and acquiring editor Tom Devlin, who discovered a copy of the comic at the Helsinki Comics Festival in September 2011, calls Nyman's comics "really cool."

"They're really well done and they're really charming," he says. "A lot of times when you have a property like this and it's being adapted to comics, it tends to be clunkily done." Devlin notes that Nyman's Pippi is shorter and younger than the "typical tall, lanky version we're used to," because her body needed to fit into a comic-panel format. "Ingrid was clearly into the idea of making comics with this character."

This isn't the first classic comics series D&Q has resurrected. In 2006, the publisher released the first of five volumes of Moomin, a serialized comic strip by Finnish artist Tove Jansson, which originally ran in the London Evening News during the 1950s. This fall, D&Q is re-launching Moomin: The Complete Tove Jansson Comic Strip under the Enfant imprint.

D&Q purchased the Pippi translation rights through the rights department of Raben & Sjogren, the original publisher of the book series. The collection is being translated by Tiina Nunnally, who worked on Penguin U.S.'s 2007 special edition of Pippi Longstocking, which marked the 100th anniversary of Lindgren's birth.

Moomin and the Comet
Tove Jansson

Drawn And Quarterly is set to announce plans later today that it will be publishing the first volume in a three-volume s...

Montreal publisher Drawn & Quarterly will soon have its hands full, thanks to a certain mischievous, pigtailed redhe...

Drawn & Quarterly has three releases in their Enfant line. Two books kick off their re-releases of Tove Jansson’s...