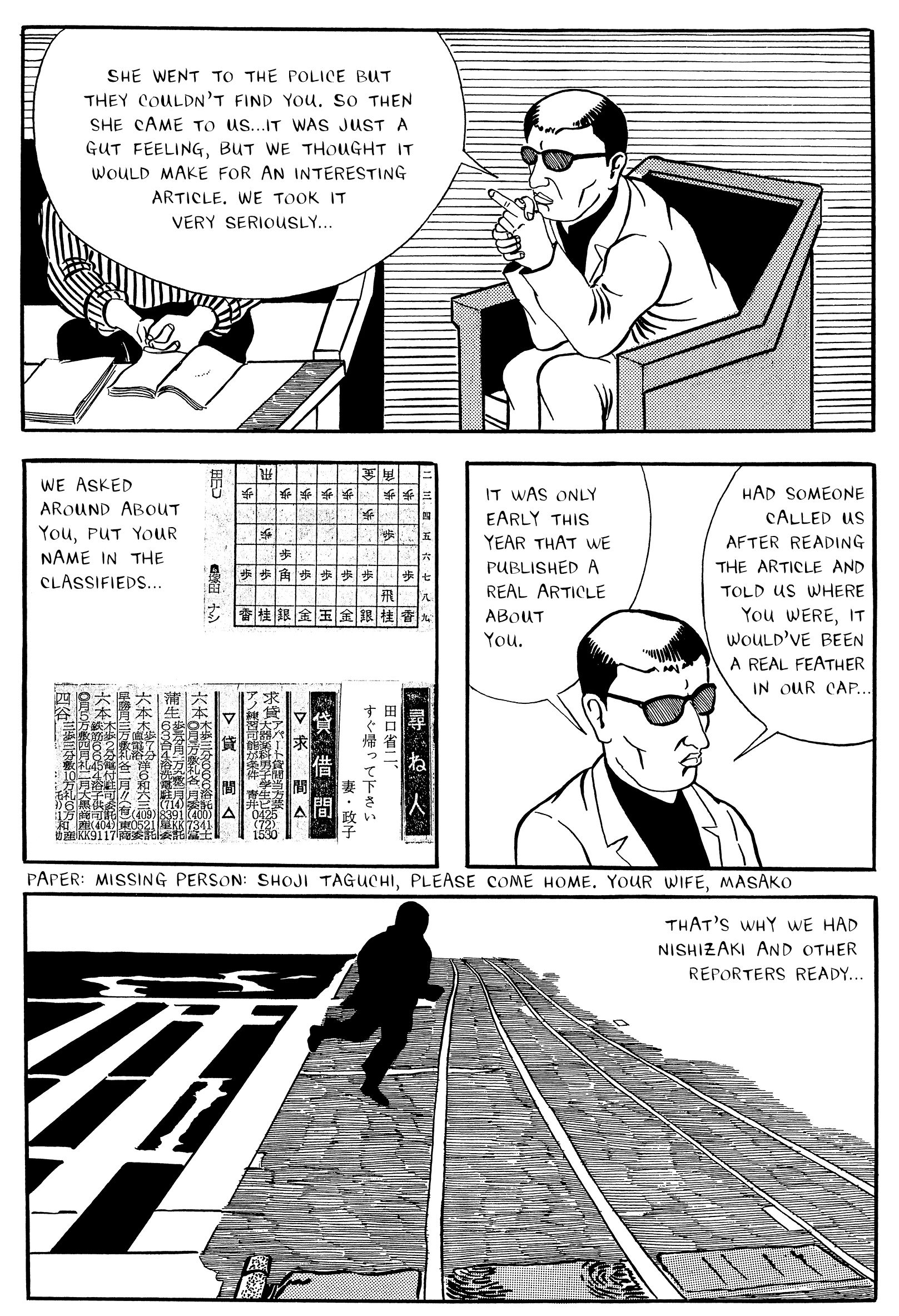 Trash Market is a collection of gekiga by Tadao Tsuge originally written in the late 60s and early 70s, portraying life in post-WW2 Japan. Anyone who has watched Grave of the Fireflies will know that this is a period in which life was unrelentingly hard for many, and Tsuge does not shy away from revealing this. These stark, unsentimental, text-heavy comics depict a dog-eat-dog world without resolution or happy endings.

Like the work of gekiga pioneer Yoshihiro Tatsumi, the drawing style is as far away from the manga that younger readers flocked to – as is the subject matter. The main body of the book consists of six stories: Up on the Hilltop, Vincent Van Gogh is first. Ostensibly concerned with the titular artist, exposition about his life and work is drawn against a backdrop of rising rents and food prices and brutal state suppression of protests that resonates today. Song of Showa is a bleak tale of domestic abuse in which a boy suffers at the hands of his father and grandfather, perpetuating the cycle of their own lives. Manhunt tells of a man who walks away from his wife and job, full of ennui and without resolution. Gently Goes the Night is about an apparently respectable family man, looked up to by relatives and colleagues, who is haunted by flashbacks to the war and takes out his frustrations on a young woman who makes the mistake of showing him kindness. A Tale of Absolute and Utter Nonsense tells of violent revolutionaries, and features a cartoonist who departs the story just before his comrades suffer their inevitable fate, perhaps showing the detachment of the author from the lives of those around him. Finally, Trash Market is set in one of Japan’s controversial, commercial ooze-for-booze blood banks (where Tsuge worked for many years and believes he picked up hepatitis C) and features a varied cast of precisely the sort of people who are sufficiently desperate to sell their blood (and more) to survive.

As well as the stories, Drawn & Quarterly gives us an edited selection from a series of autobiographical articles called The Tadao Tsuge Review, as interesting as the gekiga themselves, highlighting the autobiographical elements within. Translator Ryan Holmberg wrote an equally fascinating piece, Portrait of the Artist as a Working Man, which follows. Together, the two paint a fascinating picture, and recount the familiar artistic challenge - one who seeks to work without commercial compromise may find it hard to earn a living doing so - which Tsuge resolved by having a series of blue collar jobs and working on comics in his spare time. As he observes, "too dark, won't sell, no commissions: one can't support a family on that pattern."

The stark, simplistic drawing style and total absence of hope mean that this is not an easy read, but is ultimately a fascinating and rewarding one.

Answer: This publisher will celebrate its 25th anniversary in 2015 with a 500-page hardcover featuring new and rare...

Drawn And Quarterly’s Tracy Hurren and Julia Pohl-Miranda held a publishing news panel on Saturday at Comic-Con In...