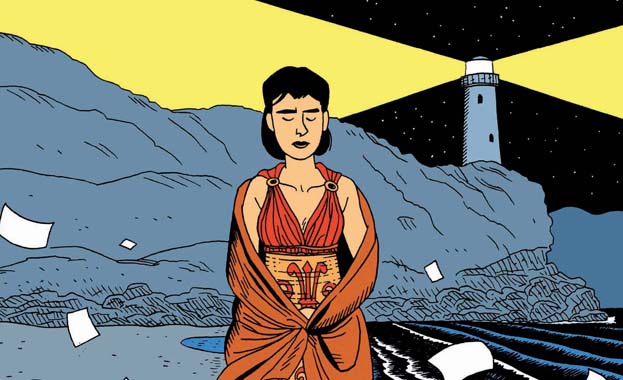 Long, long ago in the early 1990's, Dylan Horrocks began to work on Hicksville, his graphic novel tale of a New Zealand town utterly devoted to comics. To a certain kind of comics fan, the setting is paradise. In Hicksville, little old ladies collect mini-comics from Finland and Mongolia, and multiple copies of all the issues of Action Comics are available at the lending library. Into this world steps an American journalist, Leonard Batts, who, having recently completed a biography of Jack Kirby, is now turning his attention to Dick Burger, Hicksville's native son, and a world-famous cartoonist.

Hicksville earned widespread adoration from fans, as well as both Harvey and Eisner Awards, when it was released, and now Drawn+Quarterly has brought it back, with a new introduction by Horrocks. He took some time to talk to PWCW about Hicksville, then and now.

PWCW: How did it feel to return to Hicksville after ten years away?

DH: It is kind of funny coming back to it after a decade or so. That book was a big part of my life, but since then a lot has happened. When Chris Oliveros at Drawn+Quarterly first asked me to draw a new introduction for it, I hesitated for a long time-it felt like going back to the past.

PWCW: What made you hesitate?

DH: Well, Hicksville was a big deal for me in a number of ways. It took me six years to write and draw, it was my 'breakthrough' work, and it received a response from readers way beyond anything I'd imagined while working on it. But it was ten years ago-and since then comics have gone from a passion to a career for me, which has meant some good things and some not so good.

PWCW: So what's happened in the intervening years?

DH: A year or so after Hicksville came out, I started getting work from DC Comics. First I wrote a series called Hunter: The Age of Magic for Vertigo for a couple of years, and then I wrote the monthly Batgirl title for a year and a half. It was fascinating being inside the mainstream comics industry, and I worked with some really great people. But it proved to be unhealthy for me as a writer and artist, and for a long time I found it very hard to write or draw anything much at all. For a few years, I was pretty depressed-something I touch on in the introduction. When I finally climbed out of the pit, I was really focused on my rebirth, and on my new work. The thought of going back to Hicksville and the past wasn't easy. So after a while, I told Chris I thought someone else should do the introduction, and we started throwing around ideas of who we could ask.

PWCW: But you did end up writing it.

DH: Yes, one morning, lying in bed before anyone else was awake, I found myself thinking about why I'd been so reluctant, and suddenly the whole introduction opened up in my mind. I think I used the introduction to reconnect the cartoonist I am today with the lover of comics who wrote Hicksville. It's one of the most frank and personal things I've ever drawn.

PWCW: What was your life like when you were writing Hicksville?

DH: I moved to the UK in 1989 with dreams of breaking into the European comics industry, and when I came back to New Zealand in 1992 it was for love. I was really torn between the two countries, though, so I went back and forwards a couple of times before finally making up my mind. Some of Hicksville was conceived during that very uncertain time.

PWCW: Those sound like difficult conditions for writing a book!

DH: Hicksville first began forming in my mind during all that uncertainty, partly as an imaginary private utopia I could visit in my head, and partly as a nostalgic dream of New Zealand-the beach, the hills, the small-town quirkiness.

PWCW: What would you say the book's really about for you?

DH: Well, as my life settled down and I rebuilt my New Zealand roots, and as Hicksville also evolved, it became a story about what Maori call 'turangawaewae'-which means 'a place to stand'-something like a spiritual home, the place where your roots are buried deep in the earth. I was very aware that New Zealand is at the very margins of the world, just as comics are at the margins of the literary and art worlds. But both New Zealand and comics are, for me, home. They're where I come from, and where I've always chosen to return. Hicksville is about making the edge into the centre-and then seeing how the world looks.

PWCW: You've said that you wrote the book in a spontaneous and unplanned way. How did that work?

DH: Well, I suppose allowing myself to treat Hicksville as a venue in which I could relax and just play meant that I let my guard down. The story that then emerged was much less deliberately or artificially constructed, but ended up exploring some very personal material. Instead of using the story to 'say something,' I was using it to try and make sense of things for my own sake-relationships, my own sense of place, my feelings about comics and art and places and nationhood. In the end, I guess it meant I went on a journey myself, rather than just trying to take the characters on a journey.

Long, long ago in the early 1990’s, Dylan Horrocks began to work on Hicksville, his graphic novel tale of a New Ze...

Dylan Horrocks has been keeping a fairly low profile on the print-end of the comics’ world lately. His work continues...