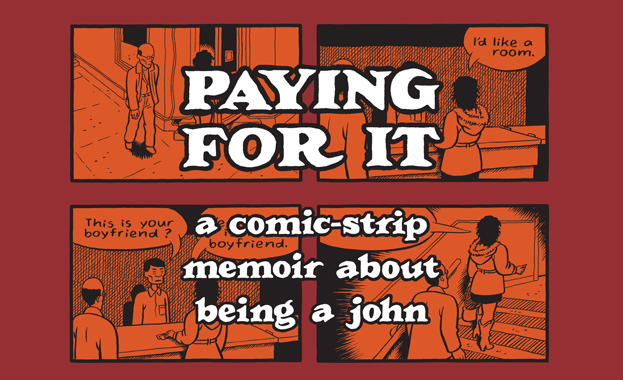 PAYING FOR IT reviewed by The Globe and Mail

Sex and the single cartoonist

In the early 1990s, my girlfriend and I considered it our duty as self-righteous university undergrads to write to cartoonist Chester Brown concerning a story in his comic book Yummy Fur. If I remember correctly, the offensive storyline in question detailed in a non-judgmental – and almost clinical – way Brown’s lifelong obsession with pornography.

A panel-by-panel of Chester Brown’s graphic style
I’ll spare you the details of my politically correct proto-feminist bluster. Let’s just say that as a devoted fan of his brilliant, groundbreaking alt-comic, I recall being genuinely distressed that he would threaten to throw it all away in favour of an examination of an issue as objectionable as (gasp) pornography.

To Brown’s credit, he reprinted my letter without comment in a subsequent issue of Yummy Fur. As for me, I eventually graduated from university, grew out of my ideological training pants and quickly learned to appreciate Brown’s fearless approach to his art.

Little did I know, he was just getting warmed up.

Given how I reacted two decades ago, I can only imagine how fans of Brown’s recent work, 2003’s bestseller Louis Riel: A Comic-Strip Biography, will react to his new graphic memoir, Paying for It. His first all-original graphic work, the book’s subtitle – A Comic-strip Memoir About Being a John – does a nice job of summing up the plot. And on the surface, Paying for It is as advertised: an exposé of the prostitution industry from the first-person perspective of a repeat customer.

But it also somehow manages to be about more than just its author’s journey into john-dom, wrangling with issues such as the nature of love and sexual attraction, all thanks to Brown’s almost-fiendish command of the medium.

The book begins in 1996 as his relationship with CBC Radio personality and musician Sook Yin-Lee comes to an unexpected end. While most people would wallow in self-loathing, Brown takes the news as an opportunity to explore his feelings about romance in general. Witnessing his ex’s new relationship bloom, then wither, girds him in his opinion that romantic relationships are inherently destructive.

Fast-forward a couple of years and Brown is resolved to try out prostitution as a means of satisfying his sexual desires. From there, he slowly and methodically lays out his progression through the foreign (to most of us) world of prostitution, chronicling his intimate experiences with more than two dozen prostitutes over a five-year period. Along the way, he presents his case for the decriminalization of the profession to his friends and family, which will seem self-serving to some readers.

But Brown is well aware of society’s attitudes toward prostitution and has built this book with such care and precision that I’d be shocked if even my devout Catholic mother weren’t sympathetic to his world view – at least a little.

This care is evident in the various levels that the book operates on. First and foremost, it’s an exploration and justification of prostitution as a logical option between consenting adults. But it also plays out as a tricky tale of unromantic love: a heartfelt argument against the ingrained cultural trappings of romance, and a fierce defence of the often overlooked joys of other forms of love (such as platonic, filial, interpersonal).

And it’s funny. As is the case in most of his other autobiographical comics, Brown sets himself up as the target of the jokes. Joe Matt, a good friend and recurring character in Brown’s work, gets the lion’s share of the yucks here. I especially liked Matt’s reaction after he learns Brown has visited a prostitute: “This is disturbing, but it’s also good gossip.”

Of course, the art is as idiosyncratic as ever. Brown forgoes the six-panel grid and turns down the cross-hatching that he used in Louis Riel for a small, rectangular eight-panel layout inspired in part by the comics of Carl Barks. These oblong panels house some of the year’s most effective cartooning, capable of lending dignity to even the most awkward sex scenes.

The book is not without its faults, though. Brown’s decision to obscure the faces of the women he has sex with to protect their identities is bound to lead to criticism that he’s objectifying them. And it’s difficult not to feel that a female perspective is missing here, especially since all we see of them is their frequently naked bodies.

Then there are the copious appendices and notes, which Brown has reserved for his real axe-grinding. Though often amusing (especially the notes by his friend and fellow cartoonist Seth) and thought-provoking, they are at times reductive and didactic. Some read like something you might find tucked under your car’s windshield wiper, like his comment that “any government scheme to license sex would be evil.” Possibly, but in what world is this an actual concern? In the end, though, I expect most people will judge this book on the comics, not the commentary, and these are some of the best comics of Brown’s career.

Simply told in a deceptively straightforward manner, Paying for It is a defiant work of truth-telling and a welcome return to autobiographical comics from one of the medium’s incontrovertible masters.