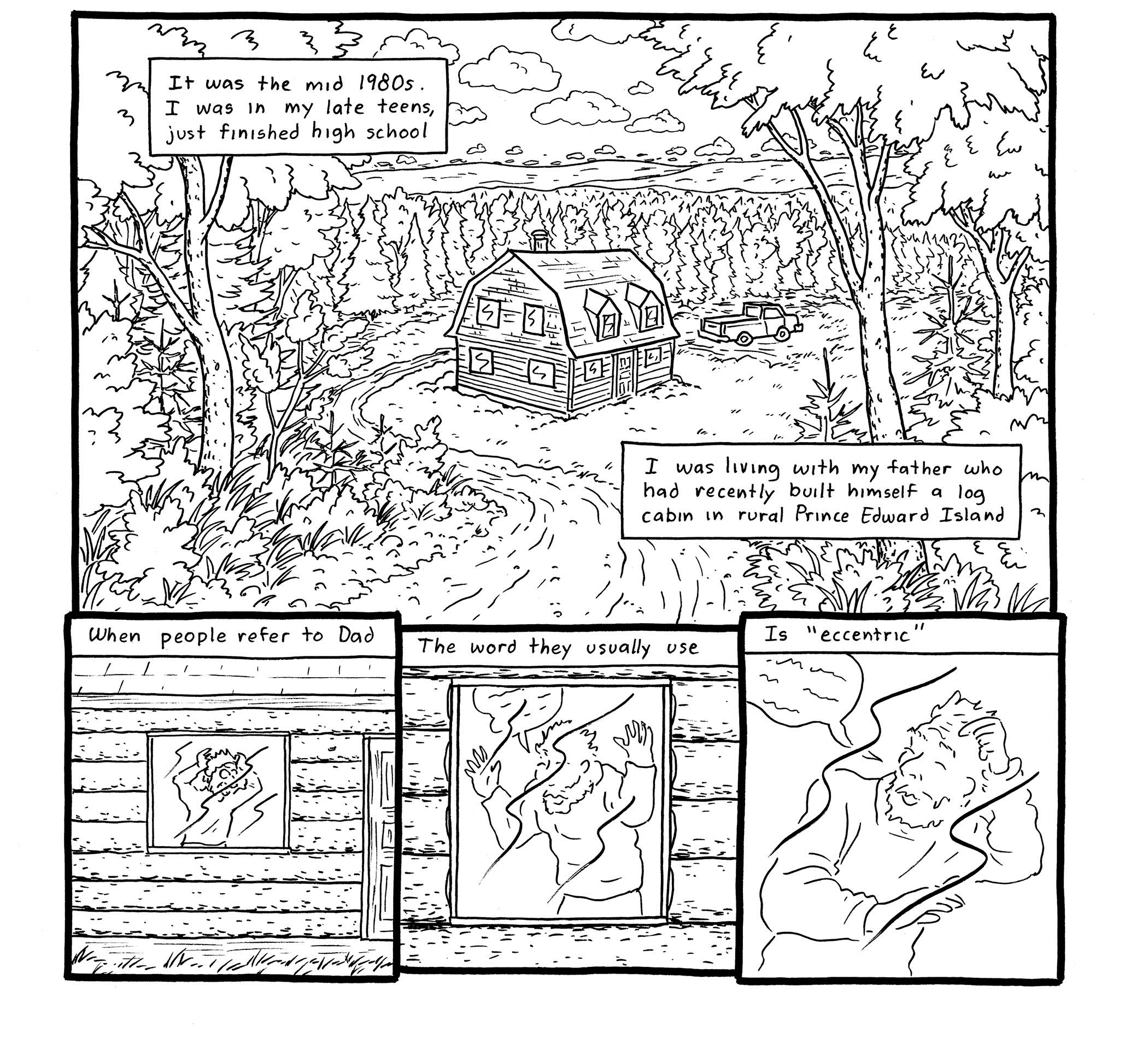 Emily Carrington’s debut graphic memoir is a deeply affecting and incisive examination of her experiences of childhood sexual abuse. The illustrated format allows for increased emotional impact in a story that is often difficult to witness; the imagery grounds the reader in metaphors and archetypes.

Carrington’s text succinctly recounts the events of her turbulent childhood and adolescence. At certain points in the narrative she addresses the reader directly, as if she is sitting in an interview, which breaks up the visual retelling of events.

When her parents divorce, Carrington chooses to live with her father, with whom she has a better relationship, but he is often angry and erratic, and he struggles with his mental health. Shortly thereafter, their farmhouse is torn down, and they move to another dilapidated farmhouse with a disturbingly predatory man living next door.

We are introduced to Richard, Carrington’s intimidating neighbour and abuser, and when he speaks, the words that come out of his ugly mouth are in a black cloud of text with wobbly lettering. Carrington identifies in retrospect – addressing the reader directly – how he recognized her vulnerability, as a child without material and emotional support, and immediately began grooming her.

When she writes “he saw me as prey,” the three panels that follow show a coyote hunting and killing a deer. A lifelong animal lover, Carrington often uses animals to represent painful feelings and memories. Survivors of childhood sexual abuse will see their experiences clearly reflected in such metaphors. Flies are a recurring traumatic motif: they are a reminder of her experiences of poverty and abuse – Richard’s hair is at times shown to be composed of flies – as well as a metaphor, as when she trudges through caves while being attacked by flies.

The perspective shifts about halfway through the book when Carrington sees Richard on a ferry decades later, connects the dots of how his abuse has complicated and damaged her relationships and sense of self her whole life, and decides to pursue legal action. Carrington takes us with her as she navigates the complexities of the legal system to achieve some kind of justice and refuses to be silenced.

Carrington’s candour in crafting this book to make the reading experience seem like a conversation – in order to give both author and reader autonomy, a role, and a witnessing of a scream into the void of the insanity – is deeply affecting. Her connection with her inner child, at times reduced to one panel per page, is goosebump-inducing. Carrington has given survivors a powerful resource to understand and articulate the depths of trauma when they feel trapped by this kind of abuse.

Our Little Secret is not an easy book to read, nor should readers expect it to be, but seeing Carrington conceptualize a way out that was not available to her childhood self is immensely valuable for all readers, particularly survivors of childhood sexual abuse. Hopefully, this book gets into the hands of anyone who needs it.

Emily Carrington’s debut graphic memoir is a deeply affecting and incisive examination of her experiences of childhoo...