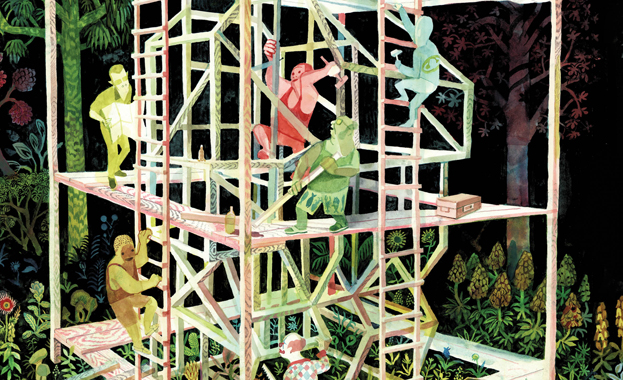 The Observer praises “gorgeous-looking” The Making Of

The Belgian cartoonist's latest novel is an amusing tale about hubris, but it's the illustrations that really dazzle

Brecht Evens, the award-winning Belgian illustrator, wrote his new graphic novel, The Making Of, with the help of a grant from the Flemish Literature Fund – which is quite funny given that his book starts out as a neat little satire on the world of subsidies, festivals and all the other ways in which public money is used to help 21st-century artists survive; I wonder how much the fund's administrators knew about what he was doing when they gave him the cheque. Not that they've any cause to complain. Evens is the finest ambassador for Belgian illustration since Hergé, and his book, so original and so gorgeous-looking, comes with the warm-hearted message that, however silly and pompous this world can sometimes be, in the end, art only ever brings people together.

Peterson, a moderately successful artist, has been invited to participate in a biennial at a village called Beerpoele. He's quite puffed up about this, telling an old friend that he'll be "creating something in situ" when he gets there. But alas, all is not what it seems. Peterson was the only artist dumb enough – or desperate enough – to have agreed to participate in the festival, and its organiser, Kristof, is not some adoring arts professional, but an enthusiastic amateur aided and abetted by a small crowd of village misfits. Worst of all, he intends to put Peterson up, not in some swanky hotel, but in his mother's garage, which she has generously kitted out with a mattress, a potty and a goldfish bowl. Peterson, however, is not to be put off. Now he's here, he'll create something great: an ironic – and iconic – masterpiece fashioned from papier mache that will tower above Beerpoele, and have the Brussels critics flocking.

Needless to say, it all goes a bit wrong – this is a book about hubris, after all – and it's pretty funny watching Peterson's plans crumble about his ears (he fails even successfully to bed his newest groupie, a care home assistant with tomato-coloured hair). But the real pleasure of The Making Of lies not in its plot, however comical, but in the way it looks, which is remarkable. Evens, who works in watercolour, really is the quirkiest of illustrators (at the Angoulême international comics festival, his last book, The Wrong Place, was awarded a prize for "audacity", and it isn't too hard to see why). I love the way he uses colour to signify personality type – Kristof, big and loud, is red; Peterson, vain and just a little sleazy, is a liverish, retro shade of green – and his wild experiments with scale and perspective mean that, for him, pace is never a problem. Turning the pages, you never know what you'll find next: a scene from a children's fairytale, lush and magical; a comic strip, busy and droll; or a nightmare straight out of the lost sketchbook of Edvard Munch.

The Making Of
Brecht Evens

City of Belgium among The Guardian's graphic highlights of 2021

Over the last 12 months, graphic novels have explored everything from injustice to hedonism. But perhaps unsurprisingly...

Thousands of books arrive at our house every year because of the various reviewing gigs like the NYT and Omnivoracious, ...

CR Review: The Wrong Place This is a beautiful-looking work, almost floridly so, but it’s also an emotionally deva...