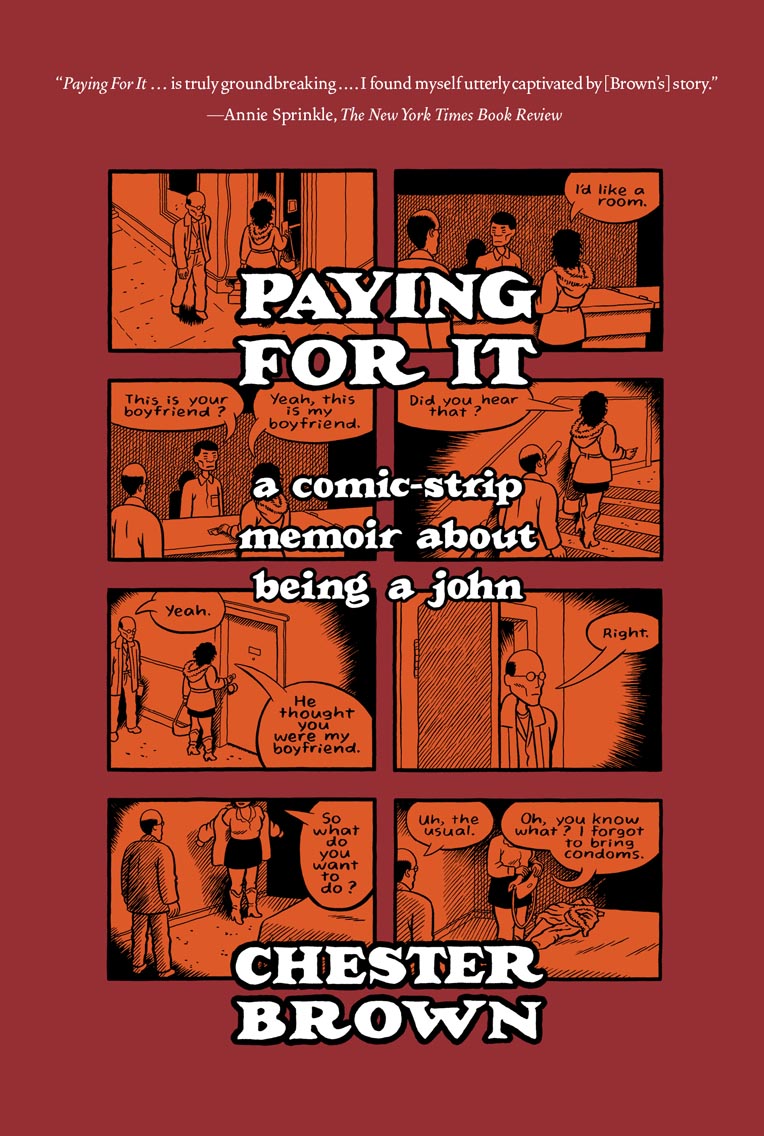 The NYT’s Dwight Garner reviews CHESTER BROWN’s PAYING FOR IT!!

A Graphic Memoir That Earns the Designation

Book titles are a touchy subject for writers. It's not rare to hear an author complain in private about one of his or hers, and ache to reach back in time to swap it for something else. A different title for a fizzled book might have meant a different life for it.

What's rare is to witness a writer complaining about his book's title inside the very book the title is stamped upon. That's what happens in "Paying for It: A Comic-Strip Memoir About Being a John," by the Toronto cartoonist Chester Brown.

This is not a feel-good comic book. It's sober and intense, as if written by a lonely and homely Lou Reed and meant to be read aloud beneath a single light bulb hung from the ceiling. But it delivers a series of moral and cerebral and horndog thwacks. It will stick in your mind and perhaps in your craw. It's a real if squeamish-making work of art.
The idea to call this book "Paying for It" came from Mr. Brown's publisher, Drawn & Quarterly, the venerable Montreal comics house. Drawn & Quarterly didn't force the title on Mr. Brown, but he felt he should heed its editorial advice. After all, he admits, "this is a difficult book to market."

What he dislikes about the title, he says, is its implied double meaning, the suggestion that he's paying for his actions in some nonmonetary - some emotional or ethical - fashion. That's absurd, he declares. The comfort of strangers has made him quite happy, or at least much less miserable.
"I'm very far from being sad or lonely," he writes. "I haven't caught an S.T.D., I haven't been arrested, I haven't lost my career, and my friends and family haven't rejected me (although I should admit that I still haven't told my step-mom)."

Mr. Brown, whose previous books include "Louis Riel" (2003), a comic-book biography of a 19th-century Canadian political agitator, is 51. He began sleeping with prostitutes, he tells us, in his late 30s. Skinny, balding and ill at ease, he was never very successful with women. After a series of unhappy relationships, he decided he was through with romantic love. He wanted sex yet not a girlfriend. As far as love and fellow feeling were concerned, friends and family were enough.

"The romantic love ideal is actually evil," Mr. Brown declares, casually tossing a thunderbolt. It promotes "more misery than happiness" and causes many people to yoke themselves for life to the wrong person simply to satisfy society's dictates. His ego is not so fragile, he says, that he needs someone to tickle him like a stuffed animal and affirm that he's lovable.
After some trepidation, Mr. Brown begins to schedule daytime sessions with prostitutes who have advertised online or in alternative weeklies. We meet a shaggy parade of them: There are Carla and Susan and Jolene and Beatrice and Larissa and Millie and others in between. These are not of course their real names, and Mr. Brown never shows us their faces, which he tucks just out of the frame or behind caption bubbles; usually their backs are turned.

Mr. Brown intends to be true, warts and all, to his experience of these interactions. He's honest about what he desires in bed (nothing outlandish) and about his own fears and those of the women he patronizes. There is plenty of straight talk about intercourse, even if his stylized black-and-white drawings are mostly PG-13- or R-rated, not XXX.
In the panels depicting sex acts, the women tend to look lovely, while Mr. Brown - with his tight, unsmiling mouth; bald head; and long, thin body - resembles a praying mantis with testicles.
He can be bleakly funny. He opens a door at one small brothel, expecting to find a familiar face. "What? That's not Angelina!" he thinks. "It's a monster in a mini-skirt!" More often he is off-putting. There's some bravery in his willingness to show himself in a vaguely creepy light.

"She's a bit too old," he thinks to himself, when told a certain woman is all of 28. He suggests in one of 23 appendices (which come before the footnotes) that "prostitution is just a form of dating." He admits that he's slightly turned on by the prostitute who keeps saying, "Ow," during sex, even though she claims she's not in pain. I cringe even to type that sentence.
Most of his encounters he finds to be pleasant, however. The first one makes him feel "exhilarated and transformed." He writes, "A burden that I had been carrying since adolescence had disappeared."

Mr. Brown's arguments in favor of legalizing prostitution are honed in a series of running conversations with his friends, mostly fellow cartoonists, who function as this book's wise-guy geek chorus. When one, hearing an online review of a prostitute, says, "This is too disturbing," Mr. Brown replies, "How can this be disturbing for someone who watches porn almost 24 hours a day?"
He sorts through all the legal, emotional and moral arguments against prostitution. He quotes experts; his book contains a plump bibliography. He considers - and largely if not entirely dismisses - concerns about troubling issues like sex slavery, thieving pimps and abuse. These things sicken him, but he thinks they are sensationalized and, at any rate, have nothing to do with his own and most people's experience of paid sex.
"I'll bet I'm close to what the typical john is like," he says to a female friend. "I'll bet a lot of johns are mild-mannered introverts - guys who would never even consider assaulting anyone."
Mr. Brown's fundamental pro-prostitution argument - he considers it a feminist one - is not dissimilar to one put forward by the political philosopher Martha Nussbaum in the wake of the 2008 call-girl scandal that forced Gov. Eliot Spitzer of New York to resign.

"The idea that we ought to penalize women with few choices by removing one of the ones they do have is grotesque, the unmistakable fruit of the all-too-American thought that women who choose to have sex with many men are tainted, vile things who must be punished," Ms. Nussbaum wrote.

"Paying for It," which includes an introduction from another randy cartoonist, R. Crumb, is a thrumming human document, hardly a dissertation. It includes a precoital moment with one sex worker, Anne, who says to the author, when she learns he is a cartoonist, "I used to like Archie comics."

Mr. Brown responds by saying, "My stuff's quite different from Archie." Truer words I have not recently read.