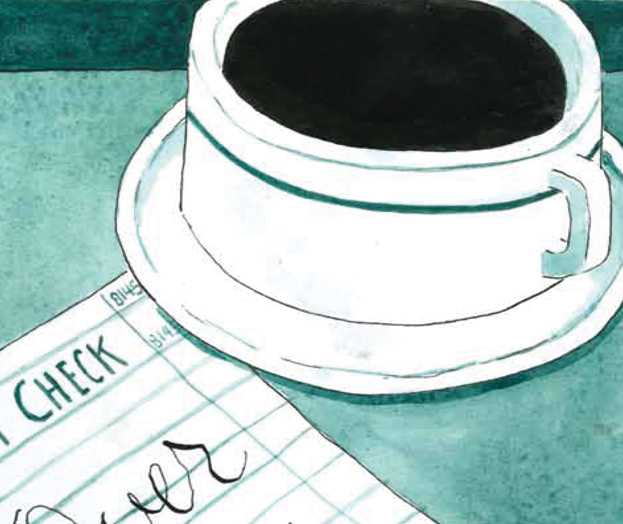 'Over Easy' Serves Up Savory Memories Of A Vintage Diner

They live among you. One of them may be your neighbor. One probably served you coffee this morning. One may even be writing this article. They are the Bohemians — or the Would-Be Bohemians. And whether you smile fondly upon their hipster specs or shudder at their footwear, they're an unbudgeable presence at the edges of the American scene.

Mimi Pond revisits one long-vanished boho node in Over Easy, a hardbound, two-color graphic novel done in ink and watercolor. It's at once the tale of an art student who gets a job in a diner and much more: a look at a handful of people, brought together by a shared affection for the fringes, who make a temporary haven for a young woman thirsting for Real Life. For every step of young Margaret's progression from mere patron to waitress and friend, Pond deploys a sensibility that's both affectionate and anthropological.

Pond has an impressive resume: She has created comics for some major publications and even wrote the first full-length episode of the Simpsons. But it's easy to see why she was compelled to memorialize a 1970s diner in humble comic form — From the cloth napkins to the fresh-squeezed OJ, the Imperial is no ordinary Oakland, Calif., restaurant. The real difference, though, is the people.

There's Lazlo, the happy-go-lucky manager who's raising three kids in a picturesque yet junkie-ridden neighborhood and writing an opus on the side. If you ask Lazlo for a job, he makes you tell him a joke — if it's funny, he'll consider your application. The method works: The Imperial waitresses, Pond says, "can go from maternal, to deadpan, to dangerous in a split second." So irresistible is their aura that Pond takes a dishwashing job in hopes of becoming a waitress someday. "I dream of slinging plates like poker chips, cracking wise with the customers, and enduring brooding, blue-collar boyfriends," she says. She "practice[s her] hard-boiled stare in the mirror behind the counter" and plans just which 1940s dress she'll wear on her first day out front.

By the time she gets the long-coveted promotion, she has scrubbed a thoroughly unromantic number of filthy rubber mats, said no (and then yes) to offers of cocaine, and finally found a boyfriend — only to ditch him two pages later because he liked the song "Baker Street." Meanwhile the other employees continually hook up, unhook and re-hook with each other and with customers. Margaret's idol is Helen, a "punk Lauren Bacall" who has the guys lining up for counter seats. "If you make her laugh, the clouds part, the sun comes out, life looks good again. I am determined to learn her secrets."

Ultimately, Margaret carves out her own niche, even getting the chance to show off some of those 1940s dresses. She acquires the nickname "Madge," keeps sketchbooks behind the counter to show her favorite customers and helps plan the big Halloween poetry reading. For an uncertain 20-something living during the disco era, this is Real Life at its finest.

Pond's casual, self-deprecating style is uniquely suited for this nostalgic tale. Her lines are unpretentious and airy, and her people aren't overwhelmed by their affectations; Pond can capture facial expressions with a line or two.

Washes of aqua watercolor lend a gentle depth to every page while slightly blurring the edges. The choice of color is particularly clever, keeping the story from being too " '70s." Who knew aqua could be a timeless shade?

Pond is a little too in love with her diner, alas. For all the charm of Lazlo and Helen, there are many characters that just aren't remarkable. And all too often Pond finds far more interest in some "wacky" development — a waitress having sex in the bathroom, say — than the reader does. But at a time when pockets of uniqueness like this are under siege — which is to say, any time — Over Easy is a sweet tribute.

They live among you. One of them may be your neighbor. One probably served you coffee this morning. One may even be w...

Mimi Pond has been a cartoonist and illustrator for more than 25 years – she also wrote the first episode of ̶...

As history has proven, times of struggle often lead to great art. And while Mimi Pond wasn’t exactly having a ter...