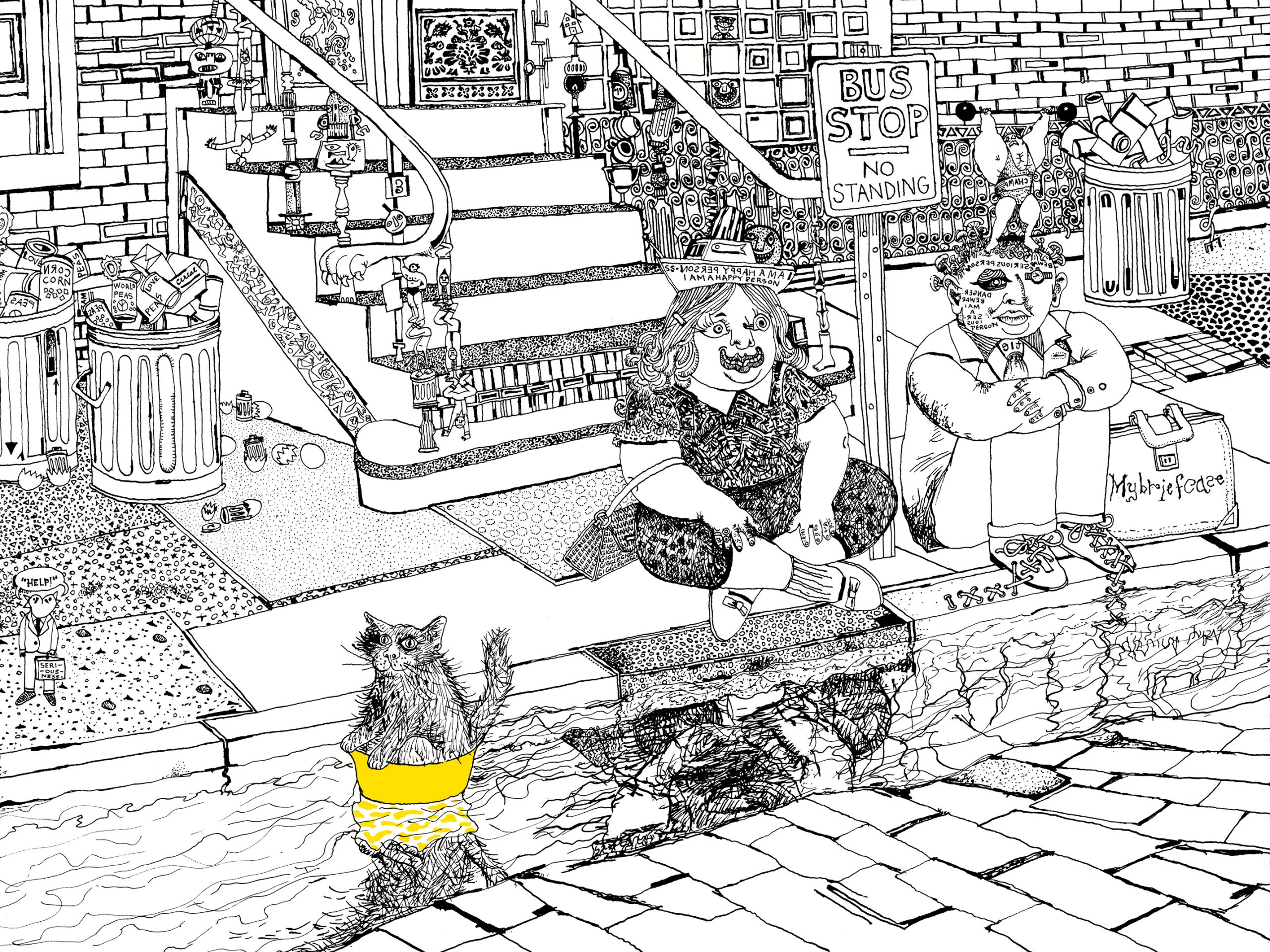 Joy In Excess: The Overflowing Art of Mark Alan Stamaty

For about a year in the late '70s, Mark Alan Stamaty showed Village Voice readers how to see their city as a child would. His weekly strip "MacDoodle St." presented life in New York City as an intricate, kaleidoscopic melee of odd people and outlandish happenings. Nothing was dingy or ordinary in Stamaty's city. Every passerby was remarkable, every block animated by collisions between disparate lives. Each new street corner offered the questing mind an opportunity to tell a story.

Stamaty's embrace of boundless excess is as evident in his career as in his art. He's penned some memorable children's books, including 1973's Who Needs Donuts?and 1976's Minnie Maloney & Macaroni. His grownup titles include 2010's Alia's Mission: Saving the Books of Iraq. And over the years he's drawn several comic strips besides "MacDoodle S.," among them the long-running "Washingtoon."

Fittingly for an artist whose oeuvre is as crowded as his pages, not one but two of Stamaty's 1970s works are being revived this spring. Last month New York Review Comics published a MacDoodle St. collection, and now, Drawn & Quarterly is reissuing 1971's Yellow Yellow, which Stamaty created with children's author Frank Asch.

Both books highlight Stamaty's ability to imagine things the way kids do — even though it's not how we usually think kids imagine things. Stamaty has no truck with cuteness, sentimentality or any of the other emotions commonly thought to characterize the childish mind. What he captures is the experience of being surrounded by things that don't make sense — and thus having the chance to make your own sense of them. Stamaty doesn't just invite readers to invent their own stories about his scenes; he makes it virtually impossible not to. The cacophonous world in these books is an ideal playground for a racing brain.

MacDoodle St. is kid stuff for grownups. There are hippos in suits, people with elephant trunks for noses, birds with human hands for tails. The strip's protagonist, would-be poet Malcolm Frazzle, might ride a giraffe or float along inside a storm cloud, raining on the people below. All Stamaty's names are like riddles: Helga Parsnip, Chad Bile, Harrison Cartilage and Brenda Funn.

At first glance there's something almost alarming about a "MacDoodle" strip. It seethes. But if you can pretend for a little while that you aren't a typical grownup — simultaneously overstimulated and bored — maybe you can drop your blinkers and imagine the stories that Stamaty's people might tell.

In Yellow Yellow, addressing real children, Stamaty and Asch deliver a strident call for young readers to embrace their inner potential. Beneath its cheerful surface, Yellow Yellow is a multilayered exhortation to take charge of your destiny. The protagonist is a young boy wandering through a typical Stamaty city, but he's alienated from it all. Exploring a fabulously cluttered construction site, he finds a yellow hard hat — a thrilling discovery. Wearing it makes him feel visible, a part of the city around him. Eventually he loses the hat, but he figures out how to recreate its power for himself.

Stamaty's drawings here are as detailed and sprightly as ever; in fact, they're more beautiful than in "MacDoodle St." and his later work. The lines are curlier, wigglier, less predetermined. Like MacDoodle St., though, Yellow Yellow is a celebration of excess — embodied in this case by the color yellow. It's the only color used in the book, and it takes over more of each page as the story goes on. Stamaty's complicated scenes gradually give way to swaths of pure yellow, representing the protagonist's artistry. By the end, the child has literally taken the power of creation away from the authors. With his own plan in mind, he scribbles yellow all over every page. The chaotic scrawls turn out to be part of a triumphant act of self-invention.

That's the kind of trick Stamaty specializes in in "MacDoodle St.," where he repeatedly breaks the fourth wall and even makes the strip itself a character. (It's a big rectangle with a face, hands and feet.) His abundant drawings are so delightful, it's possible to ignore the message hidden amidst it all. But for those willing to look, these books offer more than a diversion. They offer the chance to get back in touch with your own imaginative powers — and, in the process, remember the most important part of being a kid.

I did not know the work of Mark Alan Stamaty until I met my husband in college and he shared his tattered childhood copy...

For about a year in the late ’70s, Mark Alan Stamaty showed Village Voice readers how to see their city ...