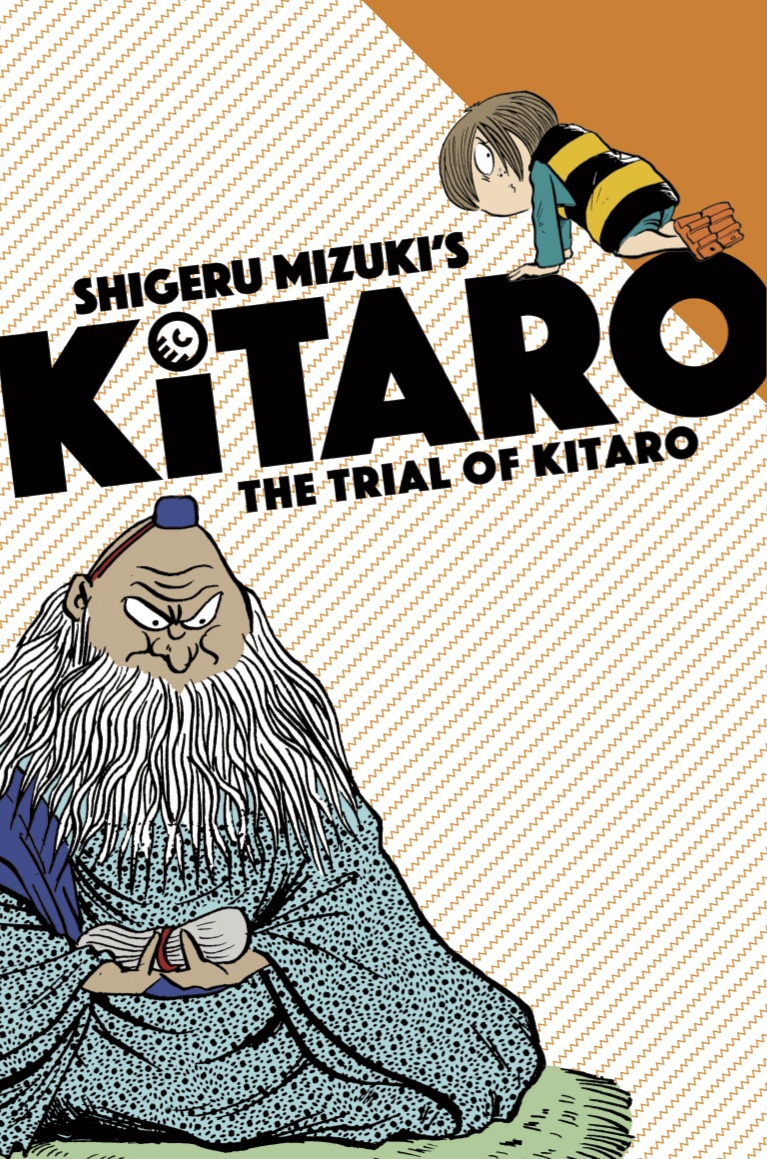 The New Yorker on Yokai, Shigeru Mizuki, and the Pandemic Mascot

From Japan, a Mascot for the Pandemic

Sometimes it seems as if Japan’s human population is outnumbered by cute characters. A few, such as Hello Kitty and Pikachu, have achieved international superstardom. But many more quietly populate the daily lives of citizens. Illustrated signs that feature choruses of anthropomorphic garbage exhort citizens not to litter; super-cute drawings of tsunamis warn residents away from dangerous shorelines. In drugstores, grinning enemas helpfully guide those in gastrointestinal distress to the proper medicine. Every prefecture has its own furry-costumed cheerleader, usually a whimsical personification of a regional dish or tourist attraction.

Even Japan’s military, the Self-Defense Forces, has a great many of them—deployed for the purposes of civilian outreach. And then there is the national Quarantine Information Office, which advises on customs procedures. In late 2019, with eerie timing, it debuted Quaran, which must be the world’s first official quarantine mascot. So it makes sense that, amid troubling times, Japanese have turned to a character for solace. The twist is that this particular one dates back to the nineteenth century. Its name is Amabié. It was first documented in an early form of newspaper known as a kawaraban, in 1846. This issue has a charmingly amateurish sketch of a three-legged, mermaid-like creature covered in scales, with the head of a bird topped by flowing locks of hair. The accompanying article describes the discovery of Amabié by an unnamed officer of the law.

He spotted it atop the waves off the coast of Kyushu after being dispatched to investigate a strange light. The creature gave its name and prophesied a good harvest. “Should an epidemic come,” it is reported to have uttered, “draw me and show me to the people.” And then it sank beneath the waves, never to be seen again. Or not exactly. A clipping of the original article survives in the archives of Kyoto University, where it is well known to Japanese folklorists. In late February, 2020, a manga artist named Hide Shigeoka tweeted an illustration of the creature with the tongue-in-cheek caption “A new Coronavirus countermeasure,” appending the Japanese hashtag #Amabie for good measure. Other artists quickly followed with their own portrayals, ranging from the sexy to the super kawaii. By early March, many of these Amabiés had been retweeted tens of thousands of times, including by newfound fans outside Japan. Amabié’s centuries-old directive to share its visage had taken on a new relevance in the era of social media.Fatal waves of highly infectious disease have bedevilled Japan since the dawn of recorded history—along with quietly persistent slow killers such as polio, tuberculosis, and syphilis. Until the advent of germ theory led to countermeasures such as penicillin and vaccines, an appeal to a higher power represented one of humanity’s only protections from these invisible existential threats.

Take the spectacular Daibutsu of Todai-ji temple, located in the city of Nara. This majestic effigy of the Buddha in bronze is one of Japan’s major tourist draws—or was, before covid-19 began turning the citizens of the globe into involuntary hikikomori shut-ins. The fifteen-metre-tall Great Buddha is a towering presence in Japanese culture, literally and figuratively. The Japanophile author Donald Richie affectionately referred to it as “a holy King Kong,” and the anime director Shinji Aramaki once suggested to me that in its massive metal presence could be seen the roots of Japan’s love for giant robots. The grounds of Todai-ji are a tranquil place, verdant and populated by tame deer. Few visitors are aware that the statue was erected in part to curb the spread of a deadly virus: smallpox. An epidemic in 735 proved so horrific that it wiped out nearly a third of the Japanese population over two years. The Great Buddha, completed around 752, represented a highly organized national effort to soothe a society thrown into chaos by disease. Its construction was a sort of religious Apollo Project, so ambitious that it nearly bankrupted the Japanese economy in the process. On a smaller scale, the Japanese people have, over the centuries, turned to a dizzying array of supernatural presences for protection from disease on a regional and even personal level. Enter—or, rather, reënter—Amabié.

Pronounced “a-ma-bee-ay,” Amabié is not precisely a deity. It is what is known in Japan as a yokai—a creature from Japanese folklore. Although yokai is sometimes translated as “ghost” in English, the concepts do not precisely overlap. Though many yokai do indeed appear ghostly or monstrous, not all are malicious; some are simply mischievous or even beneficial to have around. Emerging from a polytheistic world view in which the islands of Japan are said to be home to some “eight million gods,” yokai parade through Japanese folktales, history, and literature as the faces behind inexplicable events or spooky phenomena. Some are humanoid or animal, others vegetable or mineral. A great many are sentient physical objects, quotidian items from daily life that have taken uncanny form after being carelessly discarded. There are haunted sandals, paper lanterns, and kimonos. There is even, deep in the lore, a yokai futon coverlet. You may even be familiar with a few: kappamaki sushi rolls are named for a yokai with a penchant for cucumber, while the ubiquitous Tom Nook, from the Animal Crossing game series, is based on a tanuki, a shape-shifting trickster animal from many a folktale.That Amabié resembles something that might appear in a cartoon or video game is no coincidence. Yokai emerged as some of Japan’s first mass-media characters in the eighteenth and nineteenth centuries.

Tokyo, known as Edo until 1868, was home to a bustling publishing industry that produced huge numbers of illustrated publications intended for everyone from children to sophisticated urbanites. Talented artists such as Toriyama Sekien, his disciple Kitagawa Utamaro, and even the great Hokusai regularly produced yokai art based on folklore or literature, charming readers by visualizing what had, to that point, been invisible. Along the way, yokai transformed from superstition to satire, as artists began employing goblins to slyly comment on politics or current events. There is an entire category of prints called Hashika-e, literally “measles pictures,” produced in large numbers during an epidemic in the eighteen-sixties. Much of it features yokai standing in for the virus, or waging battle against other personifications of it. Yokai were abandoned as old-fashioned in Japan’s headlong rush to modernize at the turn of the twentieth century, but they enjoyed an unexpected resurgence in the late sixties as stars of a hugely popular children’s manga and anime series called “GeGeGe no Kitarō.” In its pages and onscreen, the late artist Shigeru Mizuki bestowed long-forgotten yokai with a new relevance for modern audiences. His portrayal of a motley crew of creatures, led by a little boy keen to their various abilities and weaknesses, is an obvious precursor of monster franchises like Pokémon and Digimon.

Today, Japan, like the rest of the planet, faces a real-life invisible monster in the form of the coronavirus. The nation’s tactics seem, at first glance, quite tepid in comparison with those of other countries. The numbers of the infected have been rising relentlessly for weeks. Yet it took a puzzlingly long while for Prime Minister Shinzo Abe to declare a national state of emergency that covered Tokyo, Osaka, and five other hard-hit prefectures, as he finally did on the evening of April 7th. Up to now, critics have accused the Abe administration of downplaying the crisis, particularly before the 2020 Olympics were officially postponed for a year. On the other hand, Abe has made clear that, even under a state of emergency, Japanese law precludes limiting the freedoms of citizens in the ways that many foreign governments have done. Many businesses that have closed have done so voluntarily, and authorities cannot enforce lockdowns or issue fines for congregating outdoors. The number of infected (more than four thousand cases, as of this writing) remains at a level that has not swamped the nation’s health-care system—yet. Although trouble is brewing in Tokyo, and there is a critical shortage of disposable masks on the commercial market, hospitals continue to operate fairly normally, or at least without the horrific overcrowding, supply shortages, and desperate triaging seen in the hardest-hit cities abroad. It remains unclear whether Abe’s measures will successfully flatten the curve or if Japan is, as some health experts warn, already beyond the point of no return. (“It’s too late,” the population-health expert Kenji Shibuya told the Washington Post on April 7th.

“Tokyo has already entered an explosive phase.”) For those of us who lived here during the events of Fukushima, in 2011, the situation is also sickeningly familiar. A quantum state of unease, a feeling of being neither safe nor seemingly in imminent danger; days spent largely indoors instead of enjoying the spring cherry blossoms outside; waiting, waiting for the other shoe to drop. In modern-day Japan, few if any seriously believe that sharing the picture of Amabié the yokai is going to stave off covid-19. Hygiene and isolation are the orders of the day. But while these practices may keep us healthy, happy is another matter. “Art is powerless against a virus, of course,” Junya Kono, who runs a Kyoto-based yokai art collective, told me. “But, by drawing Amabié, we can take a measure of solace in having made our own little contribution.” In helping us connect with one another in our isolation, Amabié might well be fulfilling her prophecy after all.