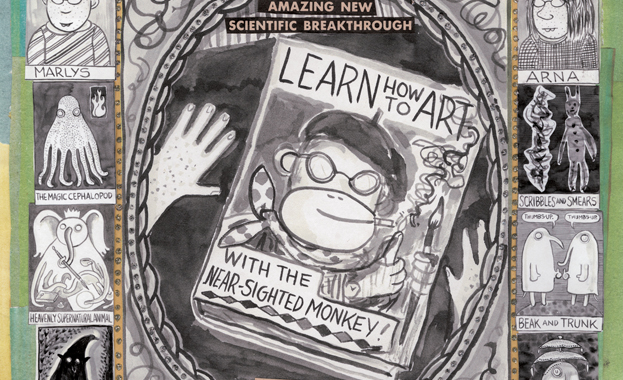 Everything is illuminated: Tagging along on Lynda Barry’s magical mystery tour of Toronto

Lynda Barry is a happiness bomb. There’s no other way to put it, because the cartoonist, teacher, artist and bestselling author is at once an aura of calm and an invigorating, entertaining presence. She’s equal parts Dalai Lama and Gilda Radner, alternately wise and cracking wise like a Zen vaudeville act. When Barry says the word awesome — which is often, usually followed by an emphatic “man” — she draws out the lead vowel like the Hollywood stereotype of a stoned hippie. I discovered this after spending a day with her last month during Toronto’s International Festival of Authors while promoting her new book Picture This (Drawn & Quarterly, $31.95).

It’s a bleak morning when I spring Barry from her hotel, figuring she’d find a walk in Kensington Market groovy (and yes: “This place could make me happy on my worst day,” she says). A jaunty red kerchief is knotted around Barry’s head, just like her long-running comic strip character Marlys, and her hair is piled up and stuck with something resembling a beaded geisha chopstick. This hair quill quivers distractingly in those many moments I think Barry might burst into rapping an ode to Elmer’s school glue.

We discuss her passionate theory of art over an omelette (“perfect!”) at our first stop, Aunties & Uncles. The retro diner is an artfully decaying mix of layers of paint, peeling wallpaper and found objects. It’s a collage not unlike the pages of Picture This, wherein Barry festoons page after page with her signature mix of markers, legal paper, plentiful dots and scraps of ephemera (principally cut from mid-century Grade Teacher magazines, a trove salvaged from the basement of a neighbour’s aunt). “I love garbage – really nice paper I don’t get along with.”

Where 2008’s enormously successful What It Is was a primer on how to tell stories, Picture This is an encouraging exhortation to art, a sort of Artist’s Way for boho eccentrics. One guided principally by Barry’s alter ego the Near-Sighted Monkey, with characters Marlys and Arna from Ernie Pook’s Comeek making cameos throughout the illustrations and exercises.

“It’s not so much drawing to make a nice picture but this idea that I have now,” she explains, “which is that the thing we call arts has an absolute biological function. It’s the same thing how our immune system helps keep us alive; this helps keep us wanting to be alive.”

As if her positive energy weren’t enough proof of her theorem, she offers an anecdote. Remember drawing a Thanksgiving turkey in class, with your hand? she launches. “You just trace it, add little feet, maybe a hat.” Pause. “Think about just what happened to you physically when I talked about drawing that turkey. Don’t you feel better? What the hell is that?” she gushes. “I’d love to have a functional MRI on somebody when they’re drawing that turkey. First, you’re having fun, then it cracks you up, then you realize you are an adult and you look around and think, ‘What do I do with it now? What does this mean?’ It doesn’t occur to you that you can just put it in the trash because the experience has already happened. The experience is what matters.”

We discuss glitter (she likes it – a lot), figure skating and the Real Housewives franchise (ditto, and ditto) and commiserate about transcribing tapes. For past two years, Barry has been living with and following the lives of 20 families and wildlife who live near her farm in Wisconsin in the vicinity of wind turbines, recording interviews for her next book (to be called Wind Hater; “the first name I was called for asking questions about it, though my favourite was wind jihadist”). At least, I try to commiserate. “Transcribing is heaven!” Barry exclaims, chin tilted heavenward before positing a theory about listening to the rhythm of people’s voices. Observing a young couple canoodling reminds Barry of another. “I have a theory we become the toys we played with as kids. My Little Pony and there you go: out comes Britney Spears.”

Next we hit Good Egg, a shop for foodsters, where Barry fondles the Le Creuset. “I love this stuff,” she says. “We have the big one” (she extends her arms into a big circle — “and use it all the time. It’s almost never empty.” We flip through Taro Gomi’s colouring books for grownups and chuckle over How High Am I? A journal. (“Stage 10: have you ever really looked at your hand?”) Enthralled by a scratchy but elaborate handwritten bike map of Dallas, she buys the display copy of From Here to There, a collection of reproduced hand-drawn maps, because “I like pre-thumbed books better than new ones.”

As we walk to the alleyway of rowhouses, Barry reaches into her satchel, fishes out a tube and reapplies a coat of M.A.C.’s burnt red ‘Chili.’ “It’s just the right shade,” she proclaims. “There’s enough orange in it and just enough red. Very hard to find.” Chili has been her signature lipstick shade for six years, she says, “because it gives me a chin. So long as I wear a red necklace.”

“This store wins,” Barry pronounces as we make our way in to stalwart vintage shop Courage My Love. Strings of beads hang over a cabinet of deadstock pantyhose, garters and embroidered name badges, each drawer labelled with a childlike doodled tag. Rifling through retro names like Rose and Horace, she holds a pair of Stub badges up to herself as though pasties and grins like a certain mischievous monkey. Later, browsing the prints at nearby Kid Icarus, Barry approves of the dots she can achieve with a new Bionic gel pen on display (“that’s a nice black”) and offers a soliloquy on beloved ballpoint pens she has known before our penultimate stop: Honest Ed’s discount emporium.

“The first time I ever came to Toronto,” Barry recounts, “this is the one place my friend took me. At night. It was all lit up.” She marvels at the hundreds of hand-painted signs, which I explain are the daily work of long-time lettering employee and one-man font Wayne Reuben.

“Is he by any chance from the Balkans, do you know?” Barry inquires. “Because I have a theory about that.”