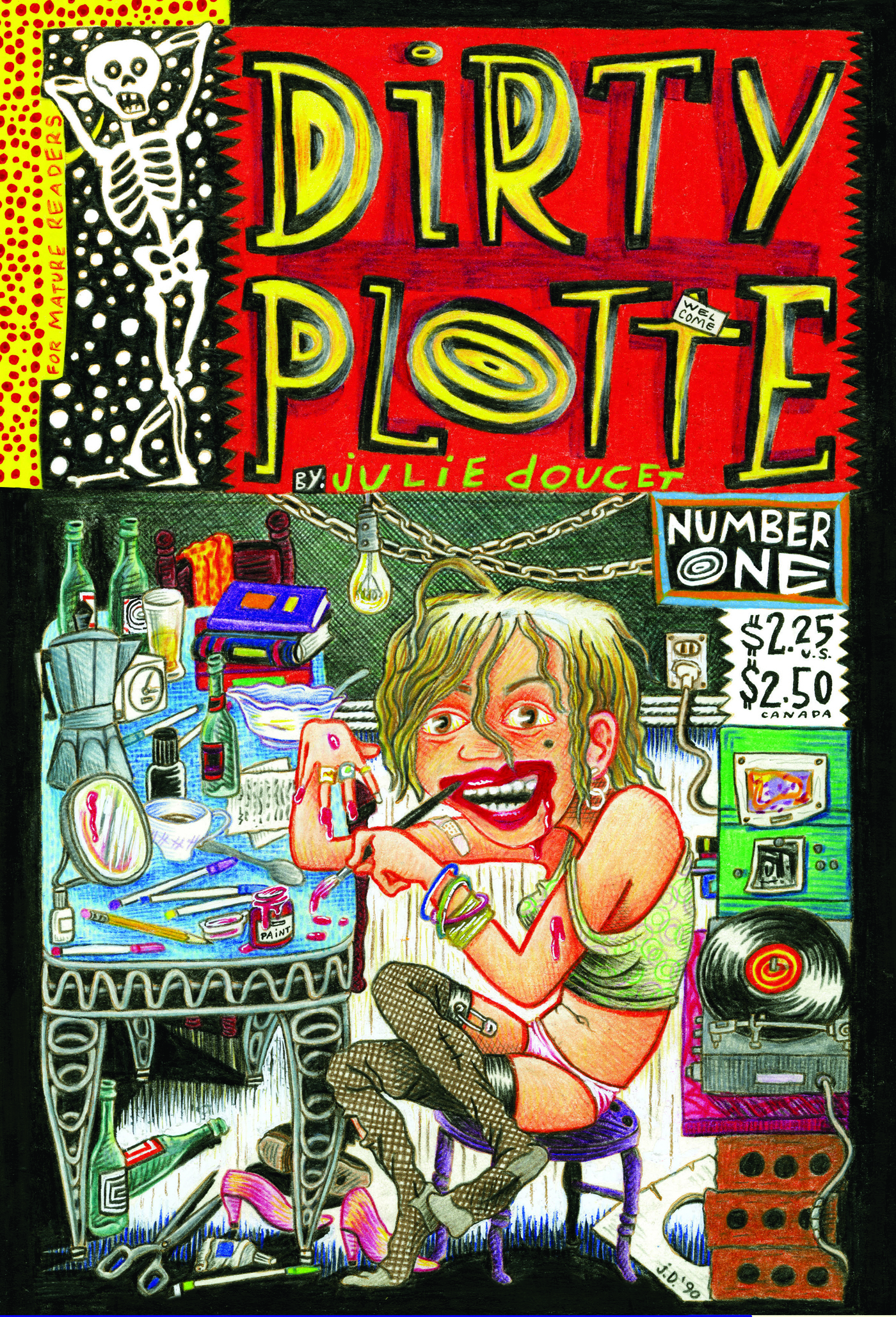 Montreal Gazette on Julie Doucet and her legacy

Montreal's Julie Doucet revolutionized comics — then she walked away

Julie Doucet began making her name in the 1980s with a self-published series of freewheeling zines called Dirty Plotte. Mostly her own work, but including material from fellow cartoonists and kindred spirits, it took advantage of the form’s under-the-radar status to exercise a giddy freedom in both style and subject. The name itself — a colloquial female anatomical reference if you were conversant in Québécois slang, a complete baffler if you weren’t — couldn’t have been further from mainstream politesse if it had tried.

“The two words looked good together,” said the 52-year-old South Shore native in a vegan cafe in Rosemont this month. “I didn’t give it a lot of thought at the time because, honestly, I didn’t think anybody would ever read it.”

Once people did start reading it, and Doucet found herself doing mail-outs to non-francophone dealers in Canada and beyond, she felt it expedient to include an explanatory note.

“I knew that no one would be able to find a translation,” she said. “There was no internet at the time. No French-English dictionary could have helped you.”

It’s a long way from there to the just-published Dirty Plotte: The Complete Julie Doucet (Drawn & Quarterly, 569 pages, $149.95). A hefty, deluxe two-volume slipcased labour of love and curatorial obsessiveness, it’s the kind of prestige treatment normally reserved for Old Masters. Seeing that title on such an upscale artifact feels like a symbolic blow struck for the underground

Essentially self-taught, Doucet’s visual style is both raw and rigorous, with a tireless attention to domestic minutiae. Asked to cite influences, she responds with a series of mostly European names likely obscure even to comix adepts. Fellow cartoonist Daniel Clowes is spot-on when he says that Doucet’s panels are “so dense with raw anthropomorphous energy they seem more like living organisms than lines on paper.” Thematically, Doucet’s mission has been to tell the story of one woman making her way through the world, by any means necessary.

It would be a pity, then, if newcomers were scared away by that title, and by some of the more extreme imagery on display. Spend some time with Doucet’s work and it soon becomes clear that the whole range of human emotion is here. The concerns may be those of everyday life, but the treatments draw from the furthest reaches of the imagination. A sit-down session with a Doucet book is an immersive and wholly welcoming undertaking; the quantity gathered in the new box is enough to provide years of companionship.

Instinctively fleeing a middle-class suburban upbringing and convent-school education, Doucet studied at CEGEP du Vieux Montréal and UQÀM before following the bohemian trail from New York (grist for the seminal graphic novel My New York Diary) to Seattle when the grunge wave was ebbing (“I got there soon after Kurt Cobain died”) and to Berlin, with intermittent Montreal pit stops. Though her work traces much of that journey, autobiography is a genre designation she resists.

“I used myself as a character, a means to tell a story,” she said of her narrative strategy. “Of course it’s inspired by life. Every writer writes about herself in a way. But autobiographical? I’m not sure. Would you say an illustrated dream is autobiographical?”

Another word that initially chafed with Doucet was feminism — a world view implicit, but never proclaimed, in her work.

“I mean, who would seriously object to the idea of equality for women?” she asked rhetorically. “But as a woman I always felt I didn’t fit anywhere, even in a feminist crowd. At one time my roommate gave me a copy of (1980s magazine) La vie en rose — very political, very activist — and after that I read every (issue) from cover to cover … and it didn’t work for me. It was just too serious.”

Nevertheless, many women found a champion in Doucet. Her readership, largely male in the earliest stages, began to trend more female, to the point where it was roughly 50/50. And it was the young women who tended to write letters to her — as in pre-internet, handwritten, snail-mail letters, to which she would always respond.

“They would say things like, “That’s how I feel, I can really relate.’ It was a surprise to realize that I wasn’t alone.”

In 2006, in a development few could have seen coming, Doucet realized that what began as a purely creative endeavour had become a grind. Rather than go through the paces, turning out work when less than completely inspired, she simply took herself out of the game. She has not published any comics since.

“It was a job at that point, and I was tired,” she recalled of the decision that was at least two years in germination. “I was living off it, yes, but not making that much money. I was working all the time, which meant not having the time or energy to do other things. There was no pleasure in it anymore. To keep on writing (about myself) … it would have been tedious. Also, I didn’t really feel comfortable being around (male cartoonists) all the time. I couldn’t relate anymore. I used to, at the beginning. But it got old.”

In a sense, Doucet has gone back to her grassroots, small-scale beginnings, doing solo projects and collaborations in a variety of media: sculpture, collage, book jacket design (that’s her work on the cover of the Penguin Classics edition of Louisa May Alcott’s Little Women), a dozen short animated films with sound artist Anne-Françoise Jacques. Her wandering days seemingly over, she’s happy in her Petite-Patrie home (“my little shoebox”), visiting friends in neighbourhood cafés and spending time in her favourite place in the city, La Grande Bibliothèque.

As for a possible return to comics, she doesn’t rule it out. Nor does she seem especially bothered either way.

“Who knows? Not me. It would have to be something completely different from what I used to do, and right now I don’t feel I have any stories to tell. Besides, you go to a store like Drawn & Quarterly now and you open a few books … there are just so many amazing things being done. I tend to get discouraged when I see stuff like that.”

One of the pioneers of modern comics, intimidated by how the form has evolved? It’s an idea that takes some time to sink in. Is the very existence of the new boxed set not its own counter to those feelings?

When Julie Doucet began publishing in the mid-1980s, she was, in the words of Montreal writer and academic Martine Delvaux, entering “the boys’ club of the comic book world.” A look around the comics scene today reveals a dramatically different landscape, and it’s no exaggeration to say Doucet, with her subversive and revolutionary spirit, had a significant hand in the change. In some cases, her influence has been direct; in others, it’s more a matter of artists moving into the space she helped clear. Here are [four Quebec cartoonists who have carried on what she started.

One of many fan letters sent to Doucet came from a 16-year-old Montreal girl expressing gratitude that someone from a home much like her own could have produced such liberating work. Doucet replied, and the two struck up a correspondence that blossomed into a friendship. The girl eventually became the author of the 2013 graphic memoir Susceptible, a book that quickly drew a fervent following and shows every sign of becoming a classic. In 2015, after moving to Washington state to be with her husband, musician Phil Elverum, Castrée died of cancer, lending a testimonial she wrote for the new Doucet collection a deep retrospective poignance.

Though her books are officially intended for young readers, Gravel’s numinous style taps into the collective inner child, too. Empirical research by this reporter reveals that the sketchbook primer If Found Please Return to Elise Gravel and the new The Mushroom Fan Club — an idiosyncratic field guide to mushrooms and their uses — have a way of migrating from the kids’ shelves out into the home at large.

Obomsawin’s acclaimed 2014 graphic novel On Loving Women gathered 10 different women’s stories to create a cumulative, impressionistic view of sexual awakening and coming out. Obomsawin draws her characters as elongated, more-or-less human figures with the heads of animals, but what might have been a bizarre gimmick is actually an inspired way to get readers to see the stories from a fresh perspective. A followup is eagerly awaited.

A contemporary of Doucet who worked in isolation, Rancourt had to wait a while before her work reached beyond hand-to-hand cult status in select local circles. But when it happened, it was a true revelation. Melody: Story of a Nude Dancer was created in instalments in the 1980s between the author’s shifts in a Montreal strip club and sold directly to the club’s patrons; it has now been pulled from obscurity thanks in part to the advocacy of American cartoonist Chris Ware. A remarkable view into a vanishing working-class milieu — think Marjane Satrapi transposed into a very different time and place and you’re getting there — it is, in the end, a moving exercise in empathy.

Rancourt, a former nude dancer (not to be confused with the children’s author of the same name) who first wrote,...

"One of Canada's most important memoirists"

“They can’t play a lick,” rock critic Lester Bangs once wrote of The Shaggs. “But mainly they got the right...