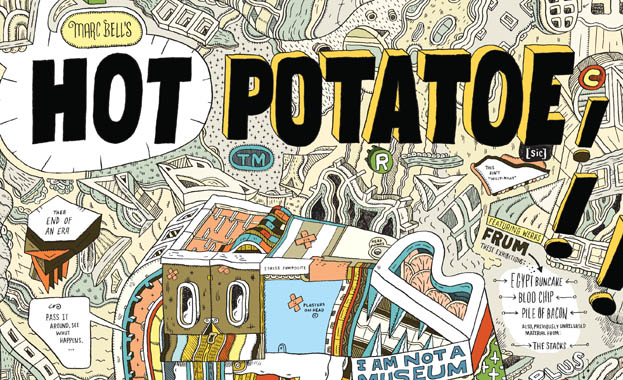 MARC BELL interview on Book By Its Cover

Marc Bell is many things; a part time schizophrenic storyteller, the King of Canadian Psychedooolia, future national treasure, a humble and kindhearted, fearless visual visionary. I first became aware of his work from his Shrimpy and Paul and Friends comics published by the old Highwater Books, and his appearances in Vice Magazine. Early on his characters, which I narrowly viewed as the Golden Age of Comics, if LSD had been handed out in the 30’s, immediately struck a chord with me. Since then, however, Mr. Bell has been boggling my mind year after year, as his bizarre intersections of lines and shapes, bold colors, and confusing forms (is it a person, or the ground that a person is walking on, or both simultaneously?), continually destroy the high regards I held for his previous bodies of work. In November, Drawn and Quartlerly will be releasing Hot Potatoe, a giant 272 page book of his work, from his early comics to his most recent drawings and assemblages, along with lots of surprises. And if you are in New York, please visit the Adam Baumgold Gallery, where Marc has tons of works in a show of the same name through November 25. Here are some questions Marc was kind enough to answer:

ML: Who is Marc Bell, and can I believe a word of what he tells me?

MB: Marc Bell is this person who is perhaps known most for his comics in “small press” or “a little bit bigger than small press” but he also creates stand-alone artwork that he shows in galleries. I think most of what he is saying here is true though sometimes his memory is not great.

MB: You know, I am not sure I remember creating this but at one point I created this imitation of a BC strip with a daddy longlegs coming out of the anthill. I also sort of remember creating a comic strip of what I imagined the third Star Wars movie to be before its release. I drew it in one those doodle pads. I don’t know what happened to it but it would probably be somewhat illegible to my grown up eyes. As a child it probably made complete sense to me.

ML: In the past we’ve discussed our processes, and if memory serves correct, you don’t really start a drawing or work with any grand plan. A drawing is able to develop freely, and may end up being colored or left black and white, or even collaged later on to become something else. How has your process evolved with the evolution of your work, especially as the comic storytelling influence has become less literal?

MB: I have always made standalone “art” alongside comics. But at one point (about 5 years ago) I stopped drawing comic stories. The collaborative stuff and my stand alone “art” have always been a little looser because I don’t have to plan as much but more recently I have been penciling “art” drawings much in the same way as I might pencil a page of comics and ink it. I think I just needed to break away from that comics way of working for a while, though in a general sense how I work still resembles the way in which I made comics. In all these mediums I work in there is a stacking of information/images. The “mixed media” work I do is probably the most removed from the comics but they are usually still composed with a grid in mind.

ML: What influences you on a daily basis, and what’s one thing you are desperate to do?

MB: I like to keep up with my peers and what they are doing. My fellow “Nog A Dod”-ers and people like yourself I get to wondering about. I am curious, I get a kick out of the art world and how ridiculous it usually is. There are not a lot of people here in Montreal that create the kind of work I do and so sometimes I miss Vancouver and what was going on there because it did feel like there was something going on. Many of those Vancouverites have since moved to Toronto and that place is too expensive for the likes of me so I am in a bit of a bubble for now.
Looking forward I would like to create a group of works that relate to each other a little more. I have been thinking about pulling some of the characters in the works out and elaborating on them a little more as single entities. Sometimes I wish I could make less cluttered pictures!

MB: Ray Johnson drew Brick Snakes and Jason Mclean created a collage of a Ray Johnson Brick Snake with the Canada Council logo on it (Canada’s Art Funding Dept) and so this was the “Canada Council Brick Snake”. I took that idea and applied to actual grant application acceptance/rejection letters. I remember seeing one of your works with the snake and wondering “whut the??” I am sure I asked you about this (?), but I forget the answer. Was yours a response to Johnson as well or were yours self-made snakes?

ML: I didn’t know about the Ray Johnson connection
till after you or Peter told me about it. I always considered my things more worm like, and I called them “Eye Worms.” The bricks actually came later on, at first they just had meaty rings around them. But it was real strange the first time I saw your snakes, to see such a similar idea coming from so far away. You Canadians seems to have an uncanny culture of unselfish idea sharing that doesn’t seem as predominant here in the States. What effect has collaborating with and riffing on ideas of your peers, had on your own work? And have you ever had issue with your ideas being used by others?

MB: Peter Thompson and I would often redraw each other’s characters or icons when creating collaborations. Or we would come up with something that would be reused and would evolve over time and through these recreations. Peter started “re-drawing” books by Jason Mclean. So we decided at one point that it would be funny if we continued to “steal” from each other’s work and use it in our own. In fact, it was encouraged not just tolerated. I think it was a healthy version of being “competitive”. I think stealing is usually ok unless somebody is making a million dollars of another’s creation and then it becomes problematic I suppose. And I suppose, other than that, if people respect each others work it usually seems ok to me. People have shown me things that have reminded them strongly of my work here and there and it doesn’t bother me. It might it if it was part of some huge ad campaign and was terrible. Anyway, I have certainly had my influences!

ML: You are no stranger to print, having self published and pro published dozens of books and comics. How does the release of Hot Potatoe compare?

MB: Well, it is probably the most exhaustive thing I have put together. It was a real privilege to create it, it seemed like something that would be made about an older artist and so I did try to make fun of this fact a bit by making fun of the form. A sort of half-serious monograph/satire.

ML: What’s next for Marc Bell?

MB: Well, Marc is having a show at the Owens Art Gallery in Sackville in early 2010. The town where he went to art school. His Shrimpy and Paul book is being translated into French by Cornelius (I believe I mentioned this about four times in another interview by accident). More stuff. A little rest.

Perhaps the biggest cliché surrounding art-comics anthologies is that they tend to be mixed bags in terms of the qualit...

SHOWCASE #4 reviewed in the Patriot-News

Most novelists wouldn’t dare to launch their careers with a book about the little things that happen to them on their ...