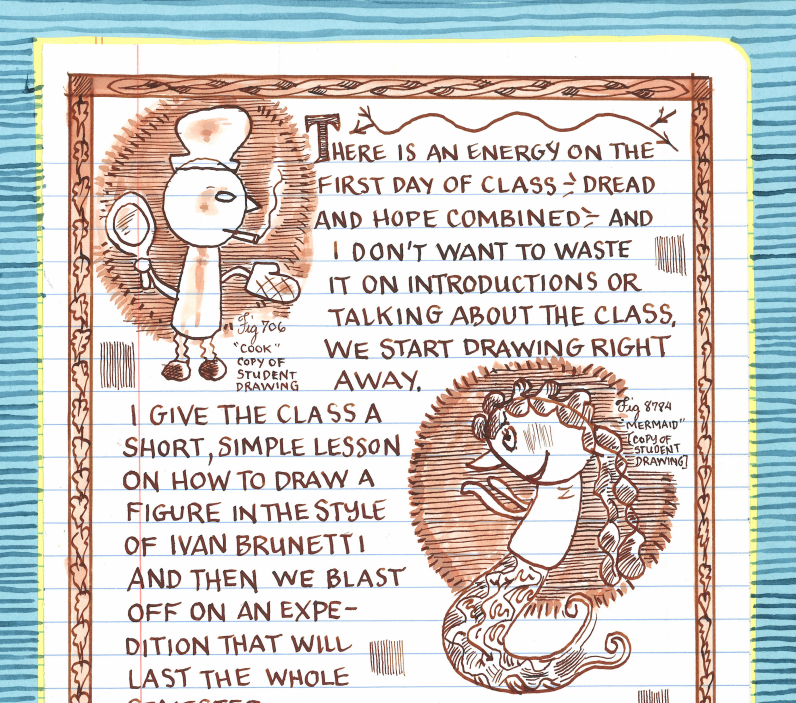 Making Comics reviewed in the New York Review of Books

Back to the Drawing Board

Sitting at home this summer, quarantined with my paper, my pen, and my anxieties, I dipped into Lynda Barry’s latest you-can-do-it-too book, Making Comics. It seemed the perfect tonic—part doodle, part manual, part therapy. Trouble was, Barry’s exercises soon awakened a couple of my latent anxieties—Devwahrphobia (fear of homework) and Atelodemiourgiopapyrophobia (fear of imperfect creative activity on paper)—which almost made me shut the book. But then it dawned on me that Barry’s genius—yes, she is certified, having gotten a MacArthur Fellowship earlier this year—is tightly bound to her ability to confront her demons and make them get up and dance for her. Barry has even drawn a book about them: One! Hundred! Demons!, based on a sixteenth-century Zen scroll.

Almost all of Barry’s comics feature gawky, uncertain youths (mis)handling the anguish of childhood and early adulthood. She was one of the first female cartoonists—decades before Alison Bechdel (Fun Home) or Marjane Satrapi (Persepolis)—to plumb the terrors and textures of her own childhood and adolescence, spurring a trend, still going strong, of autobiographically inflected comics. In fact, the impetus for Barry’s first published work was her boyfriend’s leaving her for someone else. “I couldn’t sleep after that, and I started making comic strips about men and women,” Barry told The Comics Journal in 1989. “The men were cactuses and the women were women, and the cactuses were trying to convince the women to go to bed with them, and the women were constantly thinking it over but finally deciding it wouldn’t be a good idea.”

That comic, Ernie Pook’s Comeek—starring a wispy, hapless daydreamer named Ernie Pook and a series of prickly dogs—launched her career. In 1977 Barry’s friend and fellow student at Evergreen State College Matt Groening (creator of Life in Hell and The Simpsons) and John Keister, who worked at the University of Washington’s newspaper, both started publishing Ernie Pook’s Comeek in their respective school papers without telling Barry. Soon her strip was picked up by The Chicago Reader, and then by alternative newspapers all over the US. It became a cult favorite.

Read the rest at the link above.