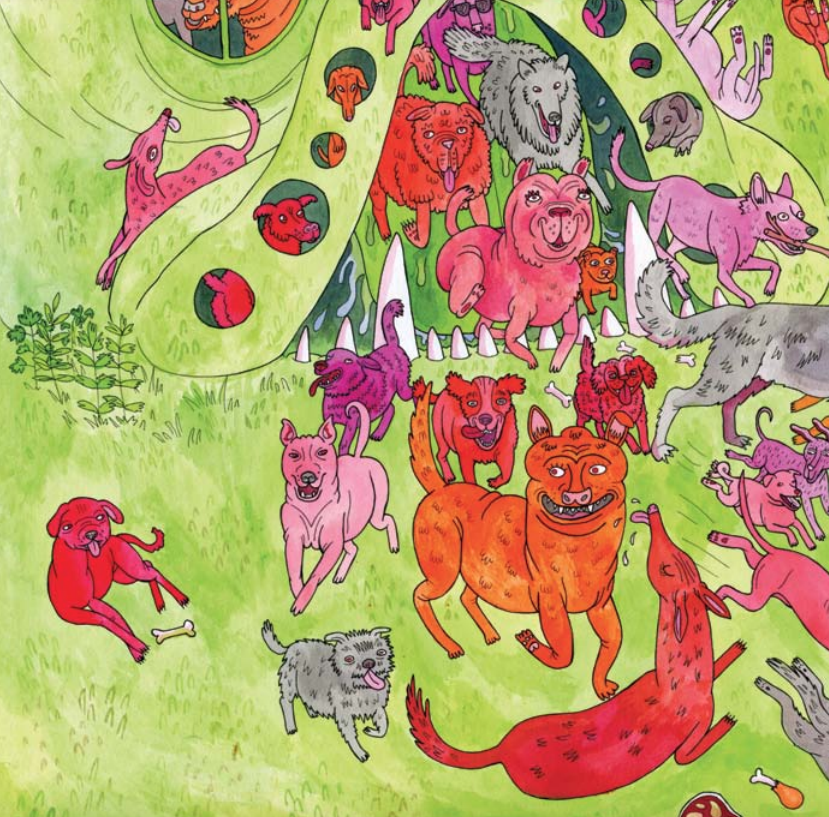 When the artist Lisa Hanawalt was sixteen years old and a junior at a public high school in Palo Alto, California, she would finish classes for the day and hurry to meet her close friend, Raphael Bob-Waksberg, in the green room behind her school’s theatre. Settling on a pair of sagging recliners, the two friends would flip through Hanawalt’s sketchbooks, with Bob-Waksberg conjuring voices and lines of dialogue for the array of figures she had drawn. The pages, she told me this spring, were filled with half-human, half-animal characters, some of which were thinly veiled depictions of her crushes, and “emo” self-portraits of the artist crying. “Lots of personal feelings laid bare for all to see,” she recalled affectionately. The teen-aged Hanawalt was not shy about addressing her “horniness” or her heartbreaks, and often conveyed her emotional state through jarringly physical drawings of herself and others. When her older brother, Alexis, left home for Los Angeles, she immortalized her loneliness with a drawing in which he cheerfully waves goodbye to the family while simultaneously tearing a gory chunk out of Hanawalt’s chest to take with him. “Very dramatic,” she said wryly.

By her mid-twenties, Hanawalt had moved to New York and turned her purgative art into a profession. In 2010, she’d won an Ignatz Award for “I Want You”—a zine featuring the anthropomorphic character He-Horse—and begun work on the comics that would comprise her first book, “My Dirty Dumb Eyes,” a “one-woman anthology” covering topics like gender dynamics, sex, and scatology. Bob-Waksberg, meanwhile, had gone to Los Angeles to pursue a career in television. The two had stayed close over the years, collaborating on a semi-autobiographical Web comic called “Tip Me Over, Pour Me Out,” among other projects. One afternoon, as he scrambled to prepare for a meeting, Bob-Waksberg dashed off a quick e-mail to Hanawalt. He’d written a treatment for a show, he explained, and he wanted to use some drawings of hers in his pitch to the production company. “Do you have a picture of one of your horse guys, by himself?” he asked. “I came up with this idea . . . tell me what you think: ‘BoJack, the Depressed Talking Horse.’ ” He described the main character as “self-deprecating, neurotic, abrasive, and stubborn.” Sounds depressing, Hanawalt thought, but sure. She gathered some of her work—images of anthropomorphized animals, all dressed in ornate clothing, and the world they inhabited—and sent them over.

Read the rest at the link above!

Lisa Hanawalt featured on It's Nice That