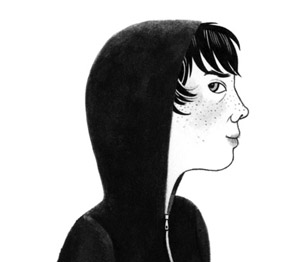 KEXP Looks Back on the Life and Works of Genevieve Castree

Beyond A Crow: Looking at the Life and Works of Geneviève Castrée

For Music Heals: Beyond Cancer, KEXP is talking to and focusing on a number of artists who have survived and beaten cancer – but that’s not the story for everyone.

On July 9, 2016, Canadian cartoonist, illustrator, and musician Geneviève Castrée passed from pancreatic cancer at only 35 years old. Most of what has been made public to larger audiences about her has been delivered to the world via her widower Phil Elverum, in the last two Mount Eerie records, 2016’s A Crow Looked at Me and 2018’s Now Only.

In these albums, Elverum vividly paints a picture of his life without her and the all-consuming grief of having the person you love leave the world. But, before cancer and death and grief, Castrée lived a passionate and artistic life that deserves examining beyond the shadow of Elverum’s sorrow.

Castrée started her artistic career in comics, where she was published and lauded at a young age. At 18, Canadian publishing house L'Oie de Cravan published her first book Lait Frappé. She followed it up with 2000’s Die Fabrik, 2001’s Roulathèque Roulathèque Nicolore, and Pamplemoussi.

The latter was monumental in literal size (12" by 12," while a standard modern comic book is 10 and 1/8” by 6 and 5/8“) but also in its convention, with Castrée including a full-length album to accompany the book.

Released under the name Woelv, the lo-fi record features Castrée singing in French over a treasure trove of childlike instruments. Recorded and mixed by Elverum, the Microphones’ influence is definitely felt. Below, listen to “Chanson Pour Le Tigre,” which features a slinky keyboard line, jazzy high-hat focused drums, and a killer recorder solo.

Her next project under Woelv was the four-track EP, Gris, in 2006 via Elverum’s label P.W. Elverum & Sun, Ltd. The EP sees Castrée expand her lo-fi sound into a dreamy and evocative soundscape.

Her final record under the Woelv moniker, Tout Seul Dans La Forêt En Plein Jour, Avez-vous Peur? (translated as Alone in the Forest in the Middle of the Day, Are You Scared?) brought the project national attention, garnering reviews from outlets like Pitchfork and Tiny Mix Tapes.

The former called it “a murky lo-fi space that treads a thin line between childlike wonder and childlike fear, sometimes evoking the shadowy worlds she has created as a well-regarded comics artist.” The album was recorded in Olympia, after Castrée’s relocation to America with Elverum, and released via K Records in 2007.

On the album’s Bandcamp page, Castrée explains her complex intentions behind the album:

"I found myself in a country where I had never thought I would live before in my life. In a country hooked to its conflicts as if they were the only reason worth living. At first I was terribly shocked. I felt too pure for wars. Then thinking of it more I realized that I had a lot of questions to ask:

"I am a young North-American, privileged, and I try to follow what is happening, mixing-up the details like many of us. I spent my share of time looking at the clouds, singing the praise of the animal world, writing poems in fogged-up windows, looking away... And what has happened around me? Was I ever the witness of major injustices? Of violent explosions between individuals? Am I in a position to speak of serious problems in others, to criticize? What is a war exactly? I am no part of any army, nor have I walked on a battlefield, yet my mouth opened itself and the notes came out.

"Tout Seul dans la Forêt en Plein Jour, Avez-Vous Peur? is my own private version of a work which wants to regroup humans who share the same fears. I put myself in the position of characters I never was (L'Homme Qui Vient de Marcher sur une Mine -the man who has just stepped onto a landmine-) and people whom I know perfectly (SangJeune-young blood-). For one of the songs (Sous mon Manteau-under my coat) I borrowed sentences from the Koran as well as an Arabic-English phrasebook, then translated into French. The final effect leaves a childish song, but naïve?

"The lyrics, sung in French, were translated in thirteen languages by people who offered their help for free; friends, friends of friends, family of friends, people I knew nothing about. I wanted to include the voices of people from everywhere. A web made by going from one person to the other, taking the risk of writing to strangers.

"The music itself is dark and insistent. It is in a bad mood, yet it still has some hope left in its vocal chords that gives it its spine. The music could sound naughty and too difficult at first, but really itwants to be like a nurturing force that very softly asks the questions we would not want to hear otherwise.

"Added to the record is a book of full-page illustrations. They are there to understand the stories that are told better. Tout Seul dans la Forêt en Plein Jour, Avez-Vous Peur? is a record about present times, but may very well be about what has happened in the past and what might just happen again in the future. Are you scared?

"Note: It must be pointed out that this entire record is sung in the French language. A listener who does not speak French should benefit from reading the translations of the lyrics included in the book. It is greatly recommended by the author."

That same year, Castrée released the 16-page comic Masques, which was produced to commemorate the 'Masques' exhibition, her second solo exhibition, held from September 18 to 29, 2007.

Back to music, while Woelv was where Castrée got her start, Ô PAON has become the project she’s best known for. The first release under the new moniker was the a)b)c)d)e) 7”, originally released as TAUS001, as an orange vinyl 7" in 2009. The A-side features the sparse track “a)” with the haunting “b)c)d)e)” on the flip side. It’s a good introduction to the darker sonic direction Castrée was heading with Ô PAON, which we see in its full form through the project’s debut full-length, Courses, released in 2010.

The record’s lead single and album opener “Le Dernier Mot” is heavy in both sound and lyrical content. Castrée’s always made a point to make the English translation of her lyrics available and this one tackles both the stolen land from Native Americans and modern capitalism in one fell swoop.

“Imposing landscapes, great country crumbling. / Landscapes stolen from people who took care of them properly. / Herds of people made insecure lead by the nose of the rich and famous. / Silver spoons. / And you, you who will not budge in front of all those imbeciles, those hired killers. / Silver spoons. / I will dare to act disrespectfully towards all their flags, they mean nothing to me… / Fifty stars reflected upon the wet sand and of a beach where it’s cold.”

The guitars churn in hypnotic, ritualistic fashion while Castrée leads a solemn ceremony.

Her next release was a collaborative EP with Anacortes-based musician Karl Blau that, while released in 2011, was actually recorded six years earlier. With dreams of making a full album but the realities of their incredibly busy lives, they only managed to crank out the three songs that comprise Karl & Genevieve.

Blau joins Castrée in singing French, on the self-described “scientific and hallucinated” EP. “Inspired by a taste for adventure, the month of August and the slow summer days of Anacortes, Karl and Geneviève remind us a little bit of the moods of Brigitte Fontaine and Areski Belkacem when they were young,” reads the Bandcamp description.

In 2012, Castrée makes an appearance on Mount Eerie’s fifth studio album, Clear Moon. The song “Over Dark Water” comes in about halfway through the record and is a unique piece to Castrée’s discography in that it’s one of the few times we hear her sing in English.

“Vastness and watching/ at the crest of night/ seeing in/ blue hole grows/ yawning,” Castrée calls out with a men’s chorus chiming in behind her and Elverum softly repeating her phrases behind and around her. It’s not the first time she’s made an appearance on a Mount Eerie record but it’s definitely the most impactful.

Continuing her streak of collaboration, Castrée releases the next Ô PAON EP as a collaborative effort with Australian musician Gus Franklin and Canadian artist Nicholas Krgovich. Titled Quatorze/Quanze Ans, the four-track EP was recorded in two sessions, the second one taking place in a yoga studio with a piano and wide-open windows, where they captured the night wind coming from the sea.

Jumping back to literature, 2013 was the year Castrée unveiled her critically-acclaimed graphic novel Susceptible. The highly personal book sees Castrée tell the true story of her difficult and chaotic childhood through the character of Goglu, a daydreamer with a young working mother, a disengaged stepfather, and a father who lives two thousand miles away.

Susceptible was shortlisted for the 2013 Cartoonist Studio Prize.

The final Ô PAON release was 2015’s full-length Fleuve. The record is loosely conceptual, inspired by Castrée’s experience as an angry teenager in the suburbs of Quebec. Intended as a companion piece to Susceptible, she drew on experiences from her teenagehood to make “a potential version of myself — a more bad-ass, f----- up one, a kid who truly wears her anger on her sleeves and gets in trouble for it in serious ways,” she said in a 2015 interview. “I am/was too polite to be her.” Sonically, the record is the lightest in her Ô PAON discography, channeling the bands who inspired her growing up in the ‘90s such as WD-40 and Stereolab.

Castrée’s last work to be published before her death was an entirely different medium altogether – a book of poetry. Released under the name Geneviève Elverum, Maman Sauvage playfully and tenderly tackles the feelings that accompany pregnancy and motherhood. Castrée gave birth to her daughter Agathe in 2015, a mere four months before being diagnosed with cancer.

Her final work, A Bubble, was published this past summer posthumously. The absolutely devastating children’s book tells her real-life story of being a mother dying of cancer and her relationship with her young daughter. Castrée’s masterful artwork details her own declining health, living in the bubble of sickness with her daughter looking on and occasionally joining her.

“It has been a while now. I no longer remember the time when she didn’t live in the bubble, I was too little,” reads one of the pages. Castrée toiled away at the book for months before cancer took her, determined to make this last project for her daughter. Portland artist Anders Nilsen helped finish up the project after her death, hand-lettering the text and drawing the many bubbles.

Elverum has lovingly and neatly bundled up the entirety of Castrée’s published works - as Woelv, Ô PAON, Geneviève Elverum, and Geneviève Castrée - in organized packages to purchase.

"So much is left unfinished for her,” Elverum posted online, the day of Castrée’s death. “She was a firehose of brilliant ideas that never turned off. We loved her and everything is weird now.”

Compared to other comics memoirists, Geneviève Castrée hasn’t led the most dramatic life. Judging by her book Susce...

Susceptible featured in The Paris Review's What We're Loving

My worst reading habit is not reading too fast, or too slow, or stopping books in the middle, or right before the end (t...