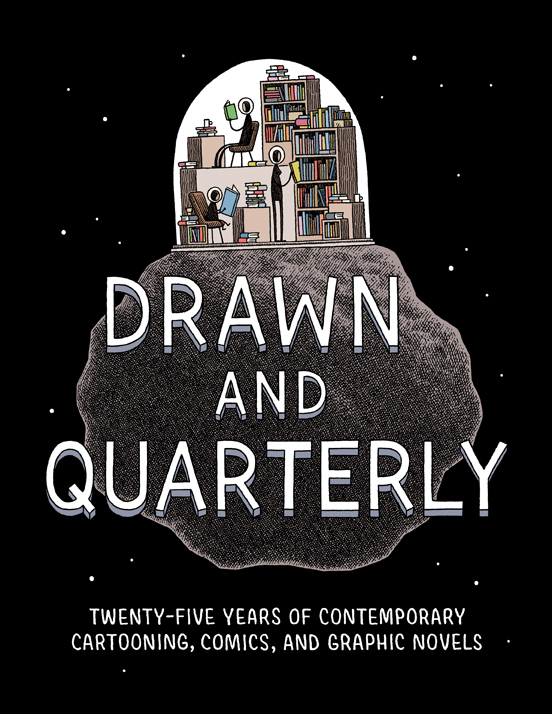 Its Nice That Interviews Tom Devlin on DQ25!

There are upsides and downsides to spearheading a movement in comics and cartooning. Upside: you’ll never be short of posters and prints to adorn your walls with, and there will always be great reading material in your bathroom. Downside: when it comes to documenting the history of your publishing house to date, you’re going to have a hell of a job with pagination.

Tom Devlin, the executive editor of Montreal-based publisher Drawn & Quarterly, can attest to this. The publisher has just reached its 25th anniversary, and to celebrate it decided to do something big. The result is Drawn & Quarterly: Twenty-Five Years of Contemporary Cartooning, Comics, and Graphic Novels, a mammoth 776-page book which is equal parts a record, a tribute to cartoonists past and present and a thank you to all who have been involved with the company over the years.

It’s been sitting on our desks for a week now, and while it sure takes up some room, there’s no end to the joy that comes from idly browsing through a random section of a lunchbreak, to find old photographs of comics artists Seth, Chester Brown, Julie Doucet, Joe Matt and Adrian Tomine hanging out together in Porto, a collection of beautiful sketches by Chris Ware, or Lisa Hanawalt’s illustrated reimagining of the Drawn & Quarterly offices. We spoke to executive editor Tom Devlin about the celebration, tribulations and the sheer enormity of condensing a quarter-century of publishing down into one book.

Can you tell us a little bit about Drawn & Quarterly’s history?

That’s what the book is for! In short, a kid from the suburbs of Montreal moved to the city and started a comics company. Right away, it was successful due to his good taste and some good luck. Eventually he needed to increase his staff and move into an office and he hired my wife Peggy. She brought me along hoping that eventually the company would be strong enough to hire me. The company grew, we opened a store, and our staff reached 20 employees. And all along the way we published the best cartoonists the world has ever seen.

What has been the biggest challenge in putting Drawn & Quarterly 25 together?

There were so many. Trying to find good photos for the lifetime of the company was hard because the first half of our life was not particularly digital and then when it was it was a crapshoot how well people stored the photos. It was hard finding authors to write about our cartoonists because we were aiming so high and obviously Jonathan Lethem and Margaret Atwood get asked to write things several times a day. But we were so lucky that so many great writers found the time for us. We also kept finding more and more stuff to add, and the book grew from 400 pages initially to its final 776.

“I thought so many times that we were going to fall on our faces with this one. Only when the completed book was in my hands did I feel like we might have done it properly.”

How did you first approach compiling the book? I imagine studio-wide brainstorms, phonebooks full of numbers, papers flying everywhere…

So much less romantic. I had the initial idea for the book and talked about it with Chris and Peggy and they thought I was crazy. But I brought it up again and explained myself better. From there the three of us decided what the book would be exactly – a mixture of new and old, some history, some interviews, some tributes to the cartoonists, and as many new comics as possible. Tracy Hurren and I worked out the design and then she started trying to fit everything in. It was definitely the biggest and hardest thing we’ve done as a team.

What are you proudest of in the book? Do you have a favourite feature?

I love Peggy’s personal essay. That was a late surprise. She had done an interview that Chris and I liked a lot but she felt it was missing a part of the picture. So she wrote the essay and surprised us with it.

But really I love how everything in the book actually worked. I really did not think it would. I thought so many times that we were going to fall on our faces with this one. Only when the completed book was in my hands did I feel like we might have done it properly.

On the website you describe the book as a 800-page thank you letter. Can you explain why?

Around the time we started working on the book, Chris came to Peg and me and said he want to step down as publisher and devote his time to being a cartoonist. We were shocked and dismayed and even a little elated. Peg and I pretty quickly realised that the book had to be a tribute to Chris’ twenty-five years as the best comics editor of all time as well as something that anyone into comics could show to people as “what we do.”

Finally, the tributes to our cartoonists was a very early idea and something that we felt was absolutely necessary. We wanted them to see how their peers adored and were inspired by them. And by peers I not only mean other cartoonists but I mean the great literary authors of our time as well.

How did you go about choosing a cover image?

The cover was a bone of contention and we even worked for a while with a different image. In the end, we chose Tom Gauld because we felt that he represented a certain modern aspect of Drawn & Quarterly. He’s been associated with the company for years and has been one of our recent successes.

What do you imagine for the next 25 years of D&Q?

Oh, gawd. I don’t even want think about it! But we do have some ideas that we hope to roll out in the next few years. Besides that, we just want to keep publishing our favourite cartoonists and make them feel appreciated and secure.

Meet the judge of the Caption This Comic Challenge: Peggy Burns, the Associate Publisher of Drawn & Quarterly who ha...

…Over at Drawn and Quarterly, publisher Chris Oliveros was on hand to talk with PWCW about gekiga, the “literary...

The story opens with whores and closes with mass graves. Huge explosions and carnage pepper the body of the narrative a...