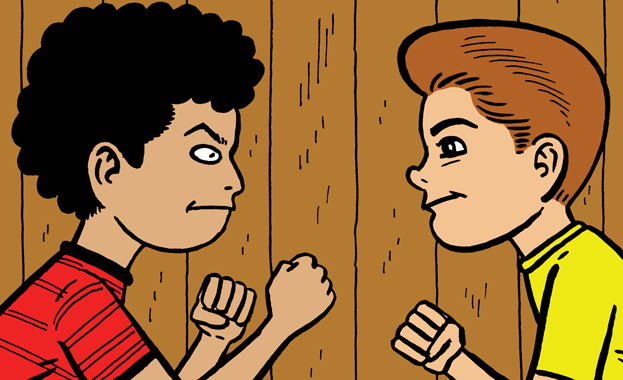 The Guardian says Marble Season “is a treat”

Gilbert Hernández isn't as well known in this country as some cartoonists. But in the US, where he has won just about every comics prize going, he's a Big Deal. According to Junot Diaz, the Pulitzer prize-winning hot dude novelist, Hernández should be "considered one of the greatest American storytellers. It's so hard to do funny, tragic, local and epic, and he does all simultaneously, and with great aplomb". Hernández is the creator of Love and Rockets, a pioneering, genre-bending cartoon which he began writing with his brothers, Jaime and Mario, in the early 80s. Among the stories in Love and Rockets was Palomar, a magic realist saga which he finally completed in 1996 (the action takes place in a fictional South American village which modern technology has yet to reach). But Marble Season, his first full-length novel, could not be more different. It's semi-autobiographical, realist and excludes adult characters (parents and teachers remain firmly off stage). It reminds me of Peanuts, which must be intentional: the 60s was a golden age for Schulz's comic strip – some of his most beloved riffs made their first appearance then, including Snoopy as a first world war flying ace – and this is when Marble Season is set too. Huey is a middle son growing up in suburban California; like his older brother, Junior, he's obsessed with comics and spends his time trying to bring their pages to life in his backyard. Through his eyes we observe his neighbourhood and the comings and goings of all the kids in it. What's amazing about the book is the way it reminds you that all childhoods are, to a degree, the same, irrespective of time and place. Everyone will recognise the loud kid who arrives on the street, shouts a lot and then disappears to a new school a few weeks later. Ditto the quiet girl who secretly swallows marbles, a weird hobby she only gives up when she finds herself in hospital. Hernández is brilliant on the particular embarrassments of growing up (the moment, say, when an older boy points out how illogical some pretend game is, and the whole illusion suddenly falls apart), and on the way its disappointments, however trivial, linger into adulthood (Huey is devastated to find that his mother has mistaken his Mars Attacks cards, purloined from a bubble gum machine, for trash and thrown them away, and the reader knows instinctively that 40 years later he'll still be trying to replace them on eBay). I'm not sure the book needs the long, hectoring afterword that an academic called Corey Creekmur has provided. Does the publisher think we're too dim to get all the references? To realise that while nothing much happens, everything happens? But this is a quibble. Marble Season is a treat: beady, nostalgic and sometimes unexpectedly piercing.