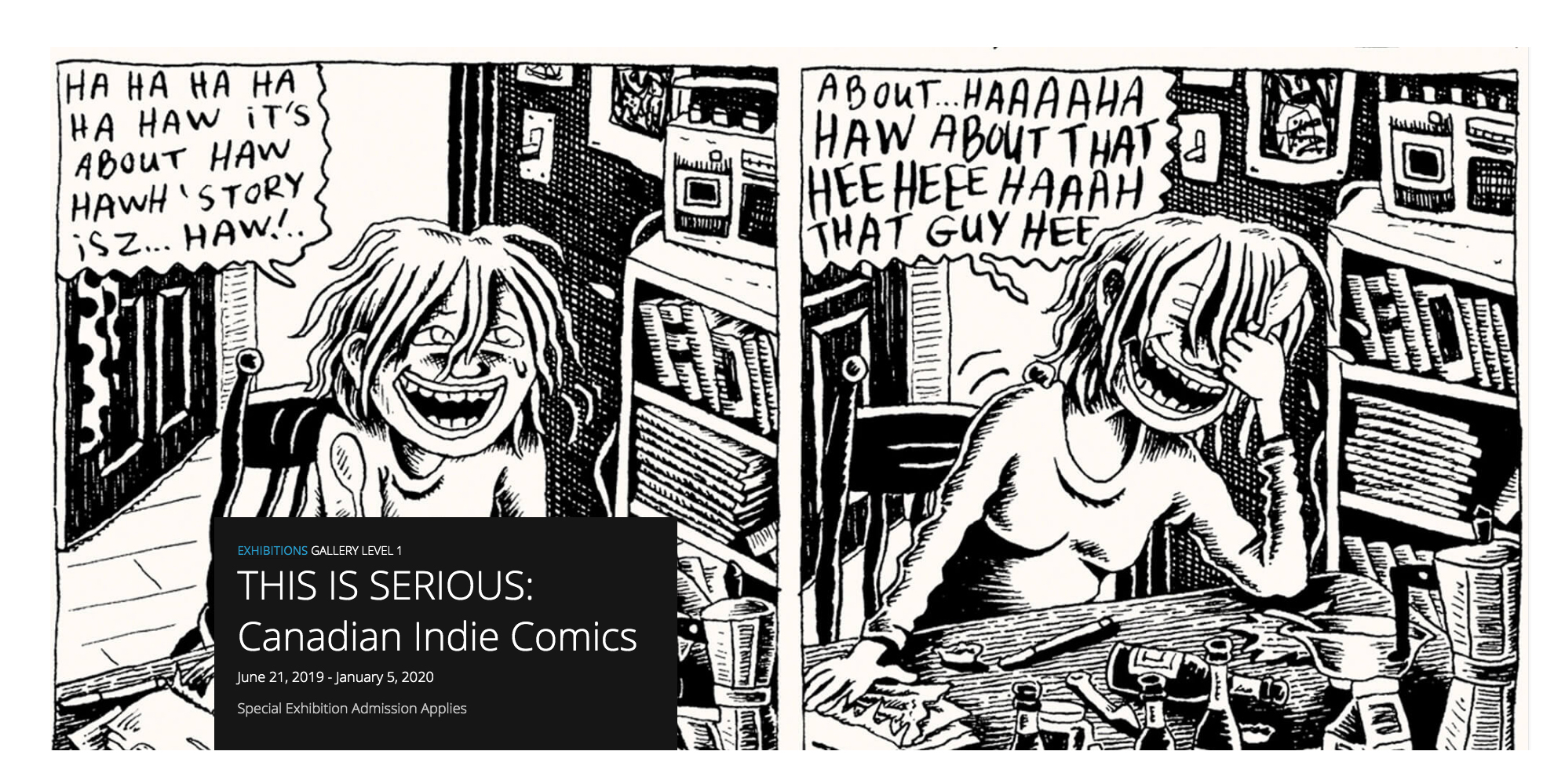 There’s a particularly fanciful example in This is Serious: Canadian Indie Comics, an ambitious survey now showing at the Art Gallery of Hamilton. In a page from 2015 entitled Comics and Commerce in Canada, artist Jesse Jacobs jokes that comics are this country’s primary export and fastest growing economic sector, thanks to plentiful colour pigments sourced from the Assiniboine Volcano Range and the underwater cultivation of presoftened maple trees that can be readily sliced into paper. With a classic look of black-and-pale-green panels enlivened with spots of psychedelic colour, the comic’s witty combination of science fiction, wishful thinking and business-speak satire is irresistible.

But seriously, why is Canada such fertile territory for indie comics?

This show begins with some history, explaining that in the 1950s through the 1970s Canadian readers (and future indie cartoonists) were introduced to comics by mainstream newspaper artists. Curators Alana Traficante and Joe Ollmann (himself a graphic novelist) take a regional approach here, using examples from the Hamilton Spectator such as Doug Wright’s gently humorous long-running strip Doug Wright’s Family (1949-80), and political cartoons right up to Graeme MacKay’s current skewering of Ontario Premier Doug Ford.

The point, however, is much larger than the crowd-pleasing local references: The curators use the burgeoning Hamilton as an example of the intense urbanization that seems to inspire the humour and the angst of so many illustrators. In a sculptural assemblage of cardboard cut-outs, Sylvia Nickerson creates a Dream City in which the belching smokestacks and rising condo towers are topped with clouds evoking more rural and suburban spaces. There is both joyful energy in the piece and a sense of chaos and loss. On the other hand, Meredith Park shows no such ambivalence in her sketchbook page stuffed with quick yet detailed illustrations of passersby that reveal her as a sympathetic and highly observant urban portraitist.

From these promising beginnings, the curators spread out to offer a national survey that introduces the viewer to an almost overwhelming number of current artists. They begin by anchoring the project with “The Big Four” – Julie Doucet, Fiona Smyth, Chester Brown and Seth. They argue that the rise of this quartet in the late 1980s established the comic – or graphic novel – as a legitimate art form. Any one of them would be entitled to a full retrospective, or perhaps a telling juxtaposition with one of the others in a two-person show, but you only get a glimpse here of their styles.

Both Doucet in Montreal and Brown in Toronto developed an autobiographical character to explore delicate personal material, but what a difference between the intensely scribbled woman of Dirty Plotte raging against menstruation and the cool, uncluttered panels of Paying For It, Brown’s controversial examination of his decision to abandon romantic relationships for encounters with sex-trade workers.

Those who know Smyth as the artist behind the colourful murals at Toronto bars Sneaky Dee’s and Lee’s Palace will recognize her riotous cartoons in a first-person account of her teenage move from a Montreal convent school to more liberated Toronto, but may be surprised by the less humorous tone of Pavor Nocturnus, the story of a woman tortured by night terrors.

Only Seth (shown conversing with Brown in Paying for It) seems to leave himself out of his deliberately retro comics – unless you know that the Guelph, Ont., artist also dresses as though it were the 1930s and has toyed with fictional versions of himself in It’s a Good Life, If You Don’t Weaken. Intriguingly, Seth is also represented by some ceramic models of furniture as though pushing his desire to observe the past into the third dimension. In a show in which the viewer has to read a lot anyway, Ollmann and Traficante have wisely kept their text panels to minimum. Still, it would be useful to know a lot more about the artistic backgrounds and careers of all four.

And to what did their so differently inventive styles give rise? The next corridor and room are a cacophony of recent work, offering such a large selection you begin to feel the curators love their comics too much to discriminate.

There’s lots of standout art here, especially from the women working in what used to be a male-dominated field. At one delicate little station, you can discover the lyrical work of Geneviève Castrée, much closer to book illustration than anything else here, while listening to her similarly dark and gentle music: What a tragedy that her career was cut short by her death from cancer in 2016, only 35 years old.

Nearby, Marta Chudolinska provides an equally distinctive approach as she assembles paper cutouts to create the flat image of a figure in Eastern-European ethnic dress. Part doll, part corpse, the figure is surrounded by labels explaining the ambivalence of the immigrant child as the artist deftly juxtaposes a pretty style with a tough message. Similarly, Nina Bunjevac examines her family’s Serbian ancestry in the brooding and hugely detailed illustrations for Fatherland. In a different neck of the woods, Kate Beaton is represented by her witty satire of famous novels, from The Great Gatsby to Jane Eyre.

Meanwhile, everything from Michel Rabagliati’s poignant reminisces of the Quebec childhood of his fictional alter-ego Paul to Hartley Lin’s Young Frances set in a Toronto law firm point to the vivacity of the graphic novel as a storytelling form. And, with a simple black line on a white ground, Sami Alwani’s fantastical The Idiot returns us to the theme of comic-making itself with its satire of a mystery machine that produces plots for the artist. Oh, and another section devoted to animation tracks illustrators’ moves into hand-drawn films.

A multiplicity of themes emerge, suggesting focused exhibitions could be mounted about comics and satire, or autobiography, or urban life, while a more detailed look at a smaller number of newcomers might better establish the power of the current movement. It’s probably evidence of how seldom public art galleries give graphic artists and illustrators their due that This is Serious has tried to do too much, as though this were the only reverential exhibition many of these artists would ever receive. Of course, if you want to know more about the individual creators, some of their books are available in the gift shop while many others can be found online. Perhaps the portable and potentially disposable comic will always triumph over the gallery-bound enshrinement of the illustrator’s art.