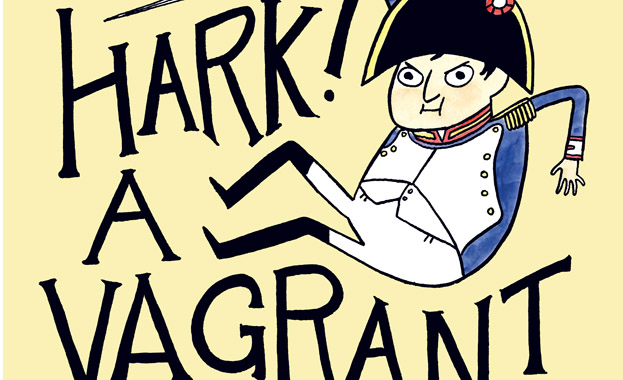 Several years ago, I was a juror for the Doug Wright Awards for Canadian comics and graphic novels, and we chose Kate Beaton as the Best Emerging Talent. It was richly deserved; I was delighted by her combination of literary and historical knowledge and a saucy pop-culture sensibility, witty dialogue and drawing.

In her first published book, the Cape Breton native, who these days has graduated to The New Yorker and other august venues, shows herself fully emerged. Hark! A Vagrant – the title comes from Beaton’s website – is a delicious gallimaufry that makes mock of cows sacred and profane with equal relish.

Drawing from history, literature and her own wacky well of inspiration, Beaton takes on the likes of Beethoven, Kierkegaard, King Lear, superheroes (Wolverine gets domesticated), teenagers, Dracula, The Great Gatsby, Laura Secord and sexual high jinks of various sorts and eras.

Most of the strips are accompanied by Beaton’s comments – arch, bemused, somehow combining irreverence with respect. For The Return of Annabel Lee, a strip taken from Poe’s poem in which Beaton imagines the young man haunted by the shade of his lost love, she writes: “When I read Annabel Lee and listen to that narrator pine and whine and pine, I think, ‘Man, Annabel? You put up with this loser?’ It’s okay to pine now and then, but a man needs a hobby that isn’t lying beside her grave and moaning. Then I wonder, ‘What if Annabel came back and she was just as lame as he was?’ It’s like they say: Be careful what you wish for.”

Two sections are especially clever. In a series called Goreys, Beaton reproduces 22 books covers drawn by Edward Gorey, acknowledged master of the macabre and the spooky, and then riffs cleverly on them. Her take on Joseph Conrad’s The Secret Agent supposes that the title character has been conned for 30 years into believing he’s a spy. For The Perfect Joy of St. Francis, a forgotten novel by Felix Timmermans, Beaton has a dove (as per Gorey’s cover) bringing the saint a pack of papers so he can enjoy what Paul McCartney called “herbal jazz cigarettes.”

The other series is Nancys, a series of sometimes bawdy takes on the Nancy Drew novels; Beaton admits to having read them all. In The Secret in the Old Attic, a clueless but persistent Nancy discovers where Father hides his “mystery juice,” with predictable consequences.

Beaton’s artwork is deceptively simple. Backgrounds are often very lightly sketched in, while the focus is on the main characters. And she’s adroit at creating character through expression: A mortally wounded Montcalm widens his eyes in annoyed disbelief when told that Wolfe has died before him on the Plains of Abraham; Joseph Kennedy’s expressions are variously sly, scoundrelly and smug as he schools his young boys in a merciless competition for the presidency.

There is also an interesting skein of feminism at play in Beaton’s work. She has great fun with the Brontë sisters, who fret over which male pseudonyms they should adopt in order to publish their novels: Wuthering Heights, by Bruce Punisher; Jane Eyre, by Johnny Guns. In Every Lady Scientist Who Ever Did Anything Till Now, she has Rosalind Franklin, an important figure in the discovery of DNA whose contributions were almost ignored until recently, being teased by Watson and Crick (pointedly unnamed) about her research, then announcing: “Well, I suppose I have to go into hysterics or have a baby somewhere.”

Witty, occasionally wise, sometimes surreal, at other times silly, mocking of past, present and pretense, Hark! A Vagrant is one of the most innovative and delightful collections I’ve come across. But where does Kate Beaton go next?

Martin Levin is Books editor of the Globe and Mail