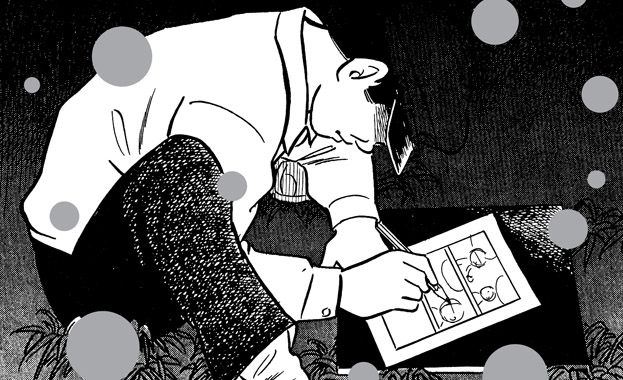 A DRIFTING LIFE reviewed by NPR.org

Memoir Of A Manga Master

NPR.org, April 24, 2009 · Mangaka, the Japanese term generally reserved for those makers of manga who both write and draw their comics, carries a connotation of craft, experience and personal vision. Manga publishing today is a multibillion-dollar business in Japan, where young and old alike devour digest-sized comic volumes by the metric ton. But even in the industry's early days, becoming a mangaka was never easy, requiring years of apprenticeship or study in a formal manga school.

By any measure, Yoshihiro Tatsumi is a mangaka to be reckoned with. He was there at the start of the manga industry in the late 1940s, and he spent several years churning out comics under crushing deadlines. Soon, however, he began to chafe at the formulaic nature of the manga he was being asked to produce, which were cartoony, fantastical and fueled by an endless succession of gags and punchlines. He sought out other creators who, like him, believed that manga had the potential to explore more realistic, complex and adult themes.

A Drifting Life, Tatsumi's massive, 11-years-in-the-making memoir in comics form, tells the story of that artistic movement. Tatsumi takes great care to show how he and his colleagues were influenced by the political and cultural confusion of a country struggling to rebuild itself after losing a world war.

This absorbing glimpse of a little-seen world might be enough to recommend the book to devotees of comics in general and of manga in particular, who may have more patience than most for the amount of time Tatsumi devotes to the nuts and bolts of literary life: haggling with publishers, commiserating with fellow authors over technique and — especially — the sending and receiving of mail. But A Drifting Life offers something much more universal: a sharply observed exploration of the urge to create, set in a time and place unfamiliar to most Westerners. Call it a portrait of the artist as a young mangaka.

Despite a surfeit of contextualizing historical detail, Tatsumi's focus is a personal one, and A Drifting Life is driven by his singular devotion to manga's potential as a means of storytelling. We watch him struggle to find his voice and experience the flashes of insight that first prompted him to experiment with the medium.

The book's tone is cool and dispassionate, which puts some distance between the reader and the events depicted. Even when Tatsumi details a moment of sudden artistic insight, the epiphanic glow that we might expect from an artist uncovering some essential truth is lacking. That's because Tatsumi chooses to frame such flashes as intellectual rather than emotional milestones. They're mental puzzles to be solved; once he's cracked them, he moves on.

Which is where the title comes in — because Tatsumi is forever moving on. The young artist portrayed in these pages is so consumed by his work that most other aspects of his life — a jealous brother, a drunken father, the older woman to whom he loses his virginity — seem to drift past his worktable like ghosts.

Even at 865 pages, A Drifting Life covers only the early years of Tatsumi's career, ending before he creates the The Push Man, Good-Bye and the other gritty, uncompromising works for which he is internationally known. If you've read any of those dark, highly stylized tales, A Drifting Life's gently humorous tone and decidedly non-experimental approach may surprise you.

But it shouldn't: This is an artist looking back at the beginnings of his career and trying to untangle — for himself and for history — the forces that shaped him into the mangaka he has become. It's a fascinating history lesson for those unfamiliar with manga, an entertaining peek behind the scenes for those who know the form. And for just about anyone, A Drifting Life provides an engrossing tale of how one artist came to know himself and his medium.