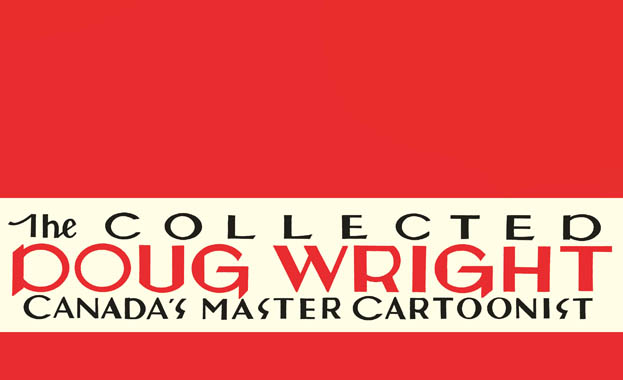 It seems as though more than half of our time as parents of young kids is spent either apologizing for their antics or cleaning up the resulting debris. Plus there's a lot of yelling, in spite of your best intentions and everything modern parenting gurus preach.

Wright's classic comic strip, Nipper, which began appearing weekly in 1949 in the Montreal Standard Magazine and later evolved into the much-beloved Doug Wright's Family in the Star Weekly and Canadian Magazine, depicts the ongoing mischievous adventures of a young boy. He's determined to explore every aspect of chaos in his house, yard and extended neighbourhood at the price of his parents' wits. Wright's strip also does a masterful job of highlighting the glee with which kids still humble, hurt and humiliate their parents with great regularity.

Perhaps the most remarkable thing about the initial success of Nipper, at least from a parent's perspective, is the fact that Wright's knack for capturing the precociousness of kids came before he had any of his own. The first of his three sons was born in 1953, an event that added even more realism and depth to the strip in subsequent years.

This first volume of a two-book set, assembled by award-winning Canadian illustrator and designer Seth, featuring an insightful and comprehensive biography by journalist Brad MacKay and an introduction by Lynn Johnston, creator of For Better or For Worse, is a breathtaking tribute to Wright's sizable artistic skills.

The book includes content ranging from some of Wright's earliest childhood drawings in England to his first job – doing illustrations on staff newsletters for Electrolux – and work from the position that brought the artist to Canada as staff illustrator for Sun Life Insurance in Montreal in 1938.

Several of Wright's cartoons for the RCAF service magazine, completed under the pseudonym "Ozzie," and examples of his take on the rural-themed Juniper Junction, which he took over in 1948 from the late Jimmy Frise and continued for another two decades, show the artist's diversity. But it is Nipper, the character that captured the zeitgeist of the late-'40s baby boom, who gets most of the attention in this book.

From tipping an ashtray into his sleeping dad's mouth to roaring around the house dragging the cat in a shopping bag to countless adventures that leave him covered head to toe in mud, the endearing little hellion almost always gets the last laugh in a wonderful collection of strips that truly stand the test of time.

Jeffrey Brown's willingness to lay himself bare in his autobiographical graphic novels has endeared him greatly to many readers over the past decade.

From emotional depictions of how he lost his virginity (Clumsy) to his first love (Unlikely) to becoming a dad (Little Things), Brown has captured the often mundane moments that form much of our lives and made them compelling through deep introspection and a delightful self-deprecating wit.