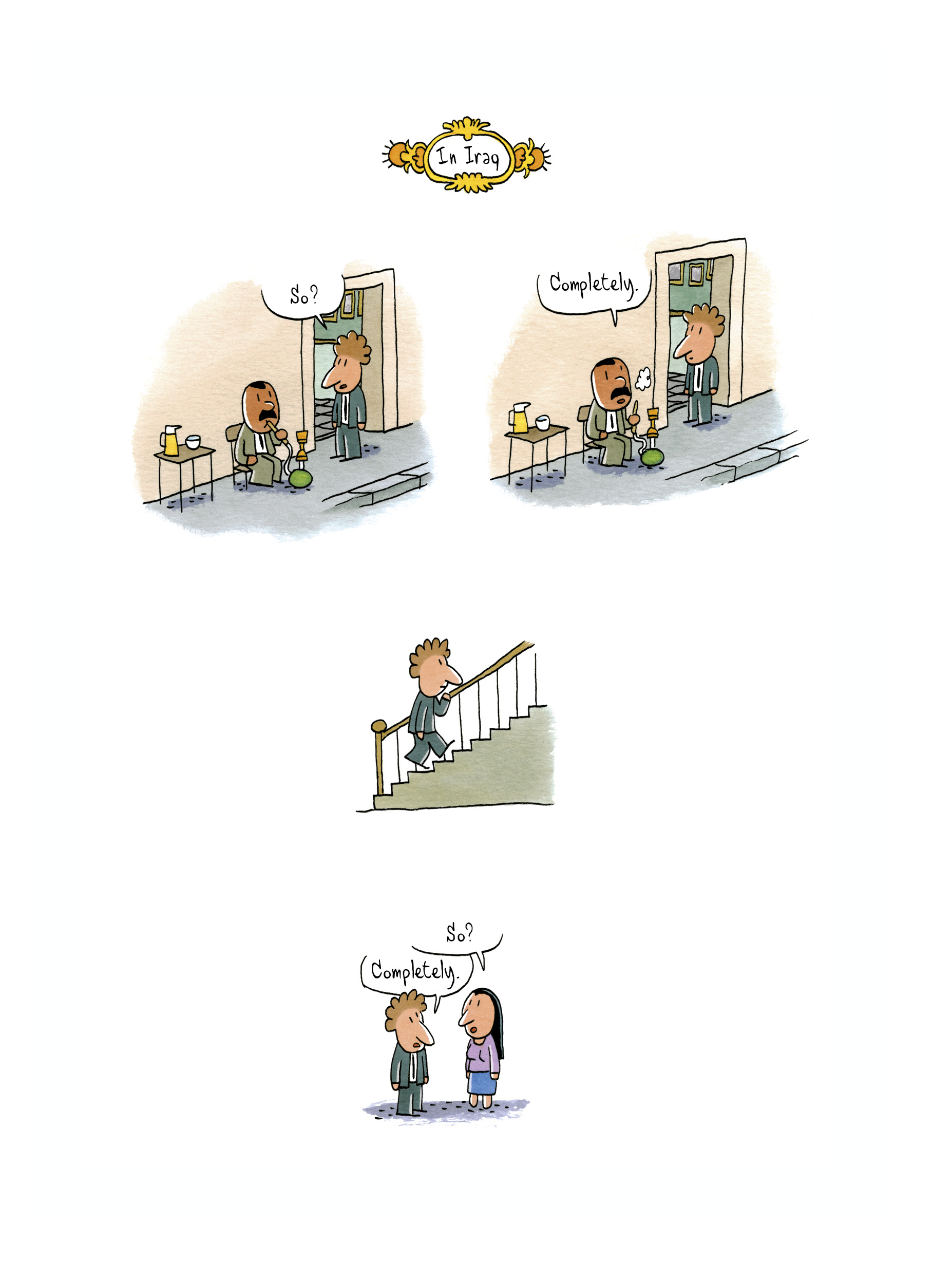 In the opening sequence of Brigitte Findakly’s memoir, Poppies of Iraq, we meet the author as a young girl in Iraq. Her family is picnicking at the archaeological site of Nimrud, outside the city of Mosul. She plays ball with her brother, while their father, an Iraqi Christian, tries to take pictures of the cute, carefree kids. We see them posed in front of a gate framed by two an- cient yet vaguely familiar pillars in a black-and-white snapshot on the book’s first page. Such historic parks of “an- cient stones” were “the perfect spot for climbing,” she says, and “for picking poppies,” the red flowers of the book’s title. Her French mother informs her that the flowers “will wilt right away, ma chérie.” But young Brigitte instinctively wants to memorialize the happiness of her childhood, and these poppies are the only thing she’s allowed to bring past the military guards and out of the park. “Taking stones was strictly forbidden,” she was told, in order “to preserve the site forever.” The grass withereth and the flower fadeth, says the scripture, but these landmarks of the ancient Nineveh plains would stand forever.

They didn’t. The pillars in the photo- graph look so familiar because we have seen news footage of members of Daesh, the so-called Islamic State, destroying them with sledgehammers. “If my father had known those winged lions would be destroyed one day,” Findakly comments dryly, “I’m sure he would have framed the shot differently.” Within the book’s first two pages, Findakly has invited the reader to a meditation on what ispermanent and what is ephemeral. All the more remarkably, these pages, like the whole book, are presented as a series of cartoon images drawn by Findakly’s husband, Lewis Trondheim, and colored by the author herself.

Like any great memoir, the story is both about the author and not about her. Findakly’s gift is not so much an extraordinary individual life, but ex- ceptional powers of observation dur- ing rapidly changing circumstances. Through well-paced vignettes, Findakly portrays a grown-up world of military coups, political propaganda, minority rights, Christian-Muslim tension, and reactionary sexual norms through a child’s eyes—or rather, through a re- construction of herself as a child in light of her present concerns. Her literary style is often absurdist, favoring high- contrast juxtapositions. A charming tale of her mother’s popular French desserts in Mosul is followed on the next page by mass hangings of Baathist militia- men. Her brother’s school bus of nine- year-olds took a class trip to witness the hangings.

Many of us may still assume that “comic books” are for children, but adult themes emerge from almost every panel of this graphic memoir. Findakly is especially concerned with forms of surveillance and threats to freedom of thought. During her childhood in Iraq, her father’s phone calls home from his work as an army dentist were moni- tored: “Speak in Arabic, or hang up!” someone yelled when her parents spoke in French. Later, after the family had moved to France and Findakly returned to Iraq for a visit, she was alarmed by the new panopticon: photographs of the country’s rulers hung in every house and shop, and public conversation aboutthe government was considered danger- ous. Though reluctant to give up on her homeland, she refused to surrender her freedom of expression and so ultimately decided to remain in France as an adult.

Findakly’s childhood best friend was a Muslim who lived next door. Her friend’s mother helped the young Brigitte with her confusing Quran homework. Such stories of mutually beneficial religious diversity appear here and there throughout the book, but we see far more suspicion and con- flict—between Christians and Muslims up close, with Jews at a distance. “The first time I heard the word Israel was in 1973 when we moved to France,” she writes. She describes the arrival, while the family was still in Iraq, of a new French dictionary in the mail. They looked up the page for Iraq, but it had been torn out, censored “to remove the entry about Israel included on the same page.” Even photographs of celebrities who were Jewish had been cut out of their French magazines.

Baptized Orthodox and then Catho- lic, the young Brigitte also learned the Quran in public school and later re- cited prayers for her first Communion in Aramaic, through a school run by Syriac Catholic nuns. She also took private French lessons with a Domini- can priest, rounding out a variegated religious upbringing, but none of this “made me a believer.” Though a mem- ber of a Christian minority in Iraq and an Arab minority in France, she never felt the zeal of the persecuted. Instead, her adult self adopted the secularism of France, an attitude projected back into her childhood self in her description of her first Communion. “I got a watch,” the young Brigitte flatly remarks on that day, “and I’m dressed like a bride.”

Political turmoil provides the backdrop of the narrative, and Findakly successfully portrays it as a child would, focusing only on the concrete ways it affected her: how it changed school assignments, friendships, or the safety of her fa- ther at work. Only much later did Findakly learn about the constant threats to Christians during her childhood, and she confesses that, amid all the unrest of the 1960s in Iraq, she felt danger only once—in France during a student protest in the summer of 1968. She decided France was really the dangerous place. It was in Paris, a decade later, that the roof of their fam- ily’s parked (and empty) car took a bullet hole during a hostage crisis at the Iraqi embassy. After that, whenever her family drove in the rain, she would catch the drops of water in a glass.

Perhaps we shouldn’t be sur- prised that a well-received memoir packed with grown- up themes could today be presented in the same visual style as a comic book. This is, after all, a mash-up era that celebrates a hip-hop mu- sical about Alexander Hamilton. The book, like the genre-mixing show, does not merely offer prosaic content in a flashier form. The pic- ture panels and interspersed photo- graphs are more than ornaments to the words of Findakly’s story. Like the choice to shoot a contemporary film in black-and-white in order to thrust the viewer into the past, Findakly’s choice of medium helps the reader adopt the viewpoint of a young girl.

Beyond that, the genre packs a punch. A memorable example comes from the first of a series of interludes labeled simply “In Iraq.” These brief excurses dramatize cultural differences between the Iraq of the author’s childhood and her later life in France. Here an Iraqi man sits at home, smoking a hookah. “So?” says a second man in the doorway, asking about something as yet secret to the reader. “Completely,” answers the first. The second man leaves toward the street. There he meets with a woman. “So?” she asks him. “Completely,” he replies. The woman leaves and walks to another house. She approaches a younger woman at home on her couch. “So?” the young woman asks. “Completely” is the reply. The young woman’s eyes widen. In the final panel, she lifts her hands to her face in grief. Two pages, six words. The reader has had no introductions to these people, and has to move slowly through the generously spaced panels searching the images for clues. What are these people talking about? What are their relationships to one another? Why don’t they just use the telephone? Why does the young woman cry? The final panel unveils the meaning, like the end of a parable. Before an arranged marriage in Iraq, Findakly tells us, “the future husband is asked if he wants his fiancée’s pubic hair completely removed or left as is.” The reader is stunned, still trying to figure out what kind of book this is. The young woman on the couch keeps crying.

With this spare vignette, Findakly depicts the separation of the sexes in the Iraq of her childhood and the so- cial control of women’s bodies by men’s whims, even without enforcement by the state. She also foreshadows observations from her final trip to Iraq in 1989. “My female cousins had stopped working... now they serve their husbands.... There were no bare shoulders to be seen in the city. And skirts had to cover the knees.” The author’s emphasis on the policing of women’s bodies would be noteworthy regardless of her own circumstances, but it is all the more so in a memoir written in contemporary France. The original French edition of this book (titled Coquelicots d’Irak) came out dur- ing the summer of the “burkini ban” on the French Riviera, when police forced Muslim women to remove their full- body bathing suits on the grounds that the burkini is not an outfit “respecting good morals and secularism,” accord- ing to the police summons obtained by Agence France-Presse. The memories recalled by Findakly in her memoir are, like all memories, stimulated by present concerns.

The English edition of the book is the same as the French, except for the cover art. The original French cover shows the young Brigitte running and smiling with poppies in hand, leaving petals behind her, like the trail of “good memories” with which she concludes her book. The new cover—either a newly drawn panel or one reclaimed from the cutting-room floor—bet- ter captures the book’s overall effect. Brigitte sits atop a stone pillar with the resignation of her adult self drawn into her childhood face, as if she had already gained the perspective that comes with growing up. Here, she’s not holding the flowers, but looking at them where they sprout from beneath the ruins. She seems to be looking, from a safe distance, for a further sign of spring.

From the daughter of a French mother and Iraqi father comes a touching memoir of childhood in Iraq. Writing with her hu...