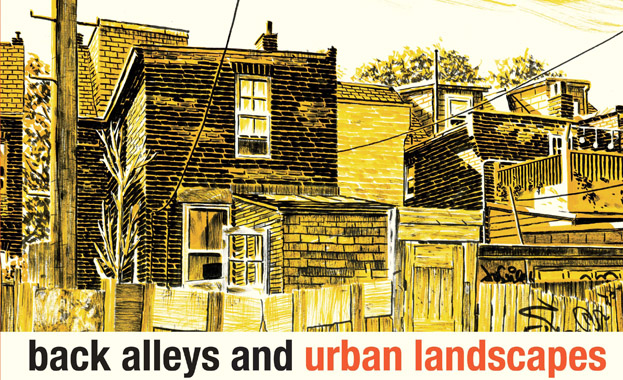 Cho’s “Back Alleys and Urban Landscapes,” reviewed by the National Post

Some years ago, Michael Cho received a two-volume book of illustrations as a gift from a family friend. The sketches, which date from the late 19th century until around the end of the First World War, were done by an insurance salesman, who compiled his drawings into a calendar he presented to friends and clients during the holidays each year. They showed Toronto as it once was, from major intersections like Yonge and Dundas to then-rural neighbourhoods like Bloor and Dufferin, which was still a quilt of farmer’s fields.

“I remember seeing those books and thinking I would love to do something like this for the Toronto that I live in now, and document what I see as my Toronto,” Cho says. “For me, it wasn’t documenting store fronts or specific street corners. It was a personal thing of just documenting the little parts of Toronto that I knew, which were the back alleys.”

Back Alleys and Urban Landscapes, Cho’s newly-published collection of sketches, is exactly what the name implies: drawings of Toronto’s back alleys and urban landscapes, which he completed over a six-year period, mostly around his home in Toronto’s west end, a neighbourhood filled with century-old semi-detached homes and labyrinthine hidden passageways.

“I’m much more interested in the irregular, unique stuff,” Cho says over coffee at Cafe Diplomatico, not far from his house. “A lot of houses, yeah, they’re very pretty — they’re the pretty [the owners] want to project. You want to find that other beauty that’s in the alleyway, somewhere.”

The beauty of Cho’s work lies in the often ignored: an old AC unit hanging out a window, the scrawl of graffiti left on a garage door, a rooftop satellite dish pointing at the stars, a streetlamp illuminating the darkness.

“There’s no identifiable Toronto landmark,” he says. “I didn’t even draw Sneaky Dee’s.” At the same time, Cho’s work will be immediately identifiable to anyone who lives in Toronto, even if they aren’t intimately familiar with the parts of the city he’s captured.

“As much as the book is Toronto-specific, I think there’s certain core, Canadian likenesses here,” he says. His drawings “don’t look like South American cities or European cities. They look like quintessentially Canadian cities.”

Cho, 40, immigrated to Canada from Seoul, South Korea, when he was six years old. He grew up in Hamilton, and came to Toronto when he was 19 to study at (what is now called) the Ontario College of Art and Design. “I am an illustrator and cartoonist — that’s pretty much the way I define myself,” he says. “I’ve always thought that the job of the illustrator was to be an honest, visual documenter of their times. … So this book sort of fits into that mandate, for me. I’ve always just wanted to express, honestly, the times that I live in. And this does that.”

Cho’s book is one of several this spring to celebrate “unknown” Toronto — the parts of the city we routinely ignore, the buildings and back alleys our eyes fail to see: Patrick Cummins’ Full Frontal T.O. chronicles the city’s changing streetscapes over a period of 30 years, while Leah Bobet’s novel Above is partly set in the city’s sewers, rooming houses and mental hospitals. “It’s more intimate, it’s more voyeuristic, in a way, but you also get closer to the city,” Cho says of his decision to concentrate on the hidden parts of the city.

“The front is the public face,” he says, while the back is “like looking at people’s tattoos, or seeing the way their bodies have aged, become different over the years.”

Cho spent countless afternoons, nights and early mornings wandering Toronto’s streets, snapping photos of backyards, garages, garbage bins and the like, before returning to the home studio he shares with his wife, artist Claudia Davila (Luz Sees The Light). Surprisingly, he never got in trouble for traipsing around behind people’s houses.

Cho says he once drove out to Hamilton to research a commercial assignment, and was yelled at numerous times for photographing the house in which he grew up, yet he could walk around Kensington Market with a friend at four in the morning without incident. “He’s got a tripod and a flask, we’re taking photos, I’m jotting down notes, we’re slightly loud at times — not one person comes out to confront us.”

“God bless Toronto for that,” he says, smiling. “That’s why I love this city.”