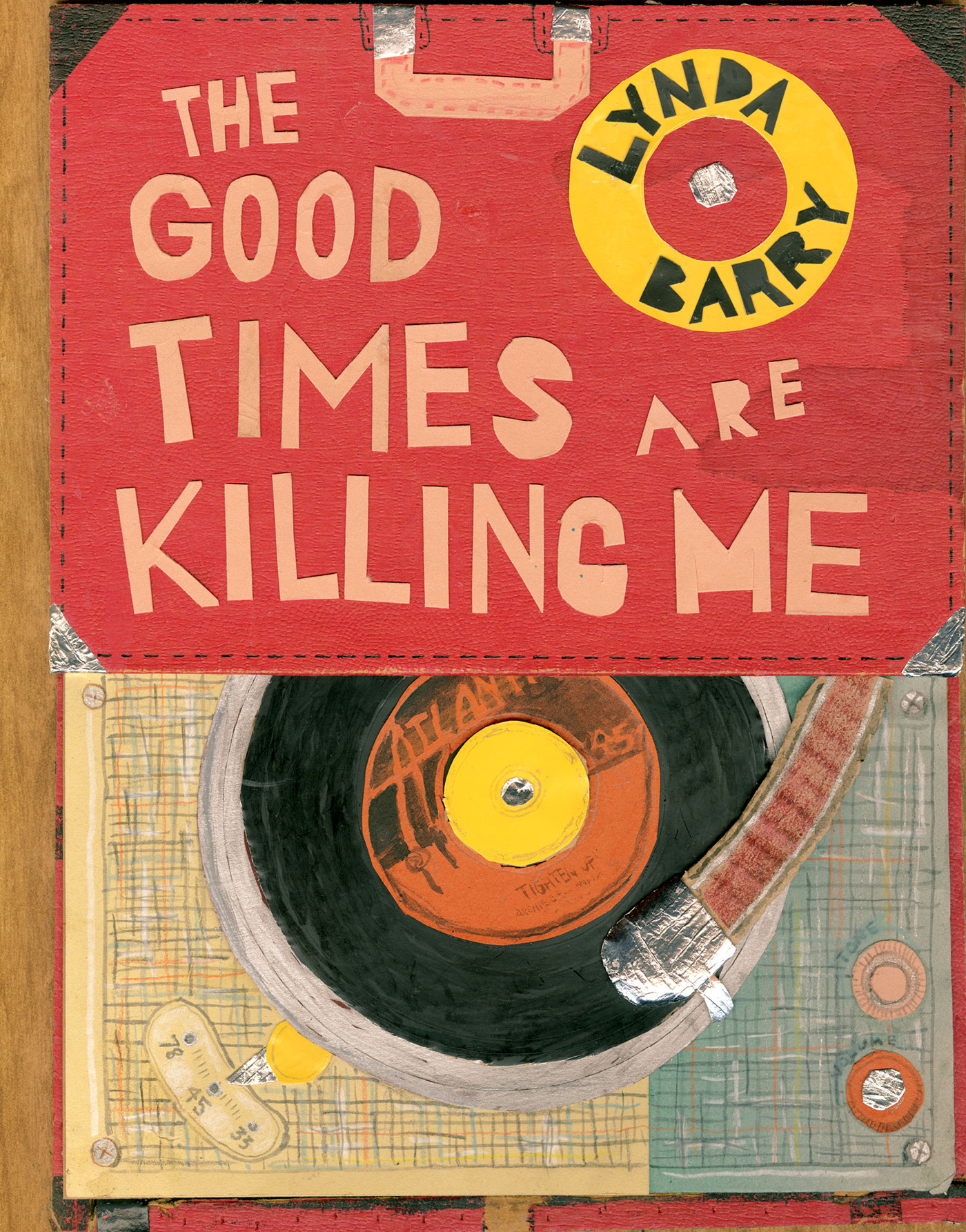 Gift Guide: 17 books for the non-reader

The new Chris Ware book has sat beside my desk for weeks. It’s been tough to miss. It’s about a foot-and-a-half tall with a canary-yellow spine, and the cover image is signature Ware: Comic book hieroglyphics of domestic ennui, linked by thin schematic lines, flow charts of word balloons and worried portraits of the Oak Park genius himself. It’s like the blueprints for a bomb that leaves you melancholy. Even if I wanted to avoid it, I couldn’t: My desk is only slightly larger than the book, yet “Monograph” ($60, Rizzoli), a survey of an artist who turns only 50 this month, is perfectly outsized, correctly singular.

No wonder I have found the book routinely moved around my desk by curious co-workers. One day an anonymous Post-It was stuck on the cover, the message simply: !!!

I get that. I haven’t been able to keep my hands off “Monograph” either. It includes giant reproductions of Ware’s New Yorker covers (which actually, partly, show Oak Park); a generous sample of his homemade toys and models (“dumb little gifts,” he writes); Ware even inserts, within the book itself, small, flippable reproductions of his smallest books. Until he receives the vast museum retrospective he already deserves, it’ll more than do.

It’s also a terrific example of the book as an object to savor, to obsess over.

For months I set aside works like this — books that distract, waving from corners of your vision, demanding another flip through. Think of these as excellent examples of inspired, and addictive, book design from 2017 — that each is also a good read is like icing. These are not books to compete with screens: Should you drop “Paleoart: Visions of the Prehistoric Past” ($100, Taschen) on an iPhone, you’ll need a new iPhone. Had I been a 10-year old boy and found this absorbing history of the 20th century paintings commissioned by natural history museums to explain the discovery of dinosaurs — yes, Charles Knight’s beloved Field Museum murals are well represented — I might have faked a cold daily. It pairs well with photographer Tim Flach’s “Endangered” ($65, Abrams), his intimate yet enormous portraits of the mandrills, bees and vultures not quite prehistoric.

The Age of Screens has meant a renaissance for physical books as keepsakes. For instance, Picador may not be the first publisher to regift old books in cool packages, but its new pocket hardcovers ($16 each) of classics by contemporary female writers like Barbara Ehrenreich (“Nickel and Dimed”) and Joan Didion (“Slouching Towards Bethlehem”) are too smart to quibble with. Hillary Chute’s “Why Comics? From Underground to Everywhere” ($40, Harper) is not another thoughtful argument for the importance of comic books (in this case, from a former University of Chicago professor) but as charmingly illustrated and approachable as the works it considers. Canadian publisher Biblioasis’ pamphlet-sized ghost stories from Dickens, Wharton and others — meant to revive the forgotten tradition of telling spooky stories at Christmas ($6.95 each), and designed by Canadian cartoonist Seth — present both the air of menace in many children’s books and the durability of classic commercial illustration. Likewise, “The Unquotable Trump” ($19.95, Drawn & Quarterly) — which looks at first like an obsessive rant — is actually a fiendishly exact homage to beloved comics (from “Watchmen” to “Archie”), recasting each with Donald Trump and a few infamous quotes.

Obsession, though, in its repetition and way of forcing us to lean forward in horror and delight, is a thread through many of these books. It’s why you can get lost in “Sandwich Anarchy: The Cult Culinary Posters of Melt Bar & Grilled” ($29.95, 1984 Publishing), 200 pages worth of sandwich ads from a Cleveland restaurant. The beautiful reissue of Lynda Barry’s underrated autobiographical novel “The Good Times Are Killing Me” ($21.95, Drawn & Quarterly), about race and falling in love with records, gets 50 pages of new art, much of it Barry’s folk-art-ish paintings of music pioneers.

Obsessiveness, in a sense, is the subject of Julia Wertz’s “Tenements, Towers & Trash” ($29.99, Black Dog), which was flat-out the most enjoyable experience I had with any book this year. Wertz, best known for her memoiristic comics and New Yorker strips, gives an illustrated, random everyday New York City, drawing the same corners a century apart, providing mini-histories of food carts, backroom bars, serial arsonists, street cleaning. The stories are funny and personal, the surprises endless. It’s so good it demands someone in Chicago — with arguably an even richer cartoonist community — to just rip off Wertz and deliver an illustrated history of Canal Street, CTA cars, viaducts.

Until then, “Muddy: The Story of Blues Legend Muddy Waters” ($17.99, Atheneum), that rare children’s picture book the childless should own, captures at least one local story with style and smarts to burn, its paintings of everyday L tracks and Chicago jazz clubs (by artist Evan Turk) recalling Middle Eastern art by way of Jacob Lawrence. Everyday, these books richly suggest, doesn’t mean ordinary. To flip through the long, thin “Bridges: A History of the World’s Most Spectacular Spans”($29.99, Black Dog) — the silver curlicue in Millennium Park and the Michigan Avenue Bridge both get starring roles — the book itself must be turned on its side. Even more clever: The new catalog ($30, Mousse) for the Smart Museum of Art’s “Revolution Every Day” exhibit, about life during the Russian Revolution, takes the form of a traditional Soviet tear-away calendar.

That said, “Unseen: Unpublished Black History from the New York Times Photo Archives” ($29.99, Black Dog) fascinates on the strength of its material alone, from a rare image of a 27-year-old Jesse Jackson protesting in Chicago, to Gwendolyn Brooks preparing a lecture — and that’s just the Chicago stuff. “Nothing Personal” ($69.99, Taschen), an art-book collaboration between photographer Richard Avedon and James Baldwin, had itself long gone out of circulation, remarkable as that sounds. Given the 50-plus years since it was published, this adoring new edition (handsome and imposing, bundled with a book of outtakes and letters and a new essay from Hilton Als) makes plain how Avedon’s large tight portrait of students and politicians, poets and celebrities and the mentally ill, revealed a cultural chasm, just before old America and new America clashed; Baldwin’s essay, wrapping around the photos, hasn’t lost a day of poignance:

“The moment we break faith with one another, the sea engulfs us and light goes out.”

A good gift, if not a light one.

For some cheer, try “Ishiro Honda: A Life in Film, From Godzilla to Kurosawa”($32.95, Wesleyan), with Chicago writer Ed Godziszewski as co-author and a forward by Martin Scorsese, an appreciation of Japanese fantasy-film history through the eyes of a filmmaker whose name is obscure but populism remains influential. Think “Star Wars,” the inspiration for the fun new story collection “From a Certain Point of View” ($35, Del Rey), a reminder of the enduring power of nothing much at all — 40 tales, 40 writers, not one told by or about a Skywalker or a Vader but the Rosencrantz and Guildensterns of the galaxy, the Death Star middle-managers, alien bartenders and droid eavesdroppers.

There’s a point, as you poke around the coffee-table book “Close Encounters of the Third Kind: The Ultimate Visual History” ($50, Harper), when you question the necessity of knowing every last bar stool story from the set of the classic, of including actual schematics and a replica Western Union telegram — even if it is from Francois Truffaut to Steven Spielberg. But then book waves to you from the edge of your coffee table ...

As Comic-Con has evolved into a juggernaut for the promotion of everything pop culture, it’s easy to overlook one ...

TALKING LINES and MASTERPIECE COMICS reviewed by The Onion

R. Sikoryak’s Masterpiece Comics (D&Q) essentially repeats one joke across its 64 pages, but at least it’s a go...

The Vernacular has a cartoonist crush on R. SIKORYAK

I’ve decided I have a new cartoonist crush: R. Sikoryak. His latest book is Masterpiece Comics, which is, in the par...