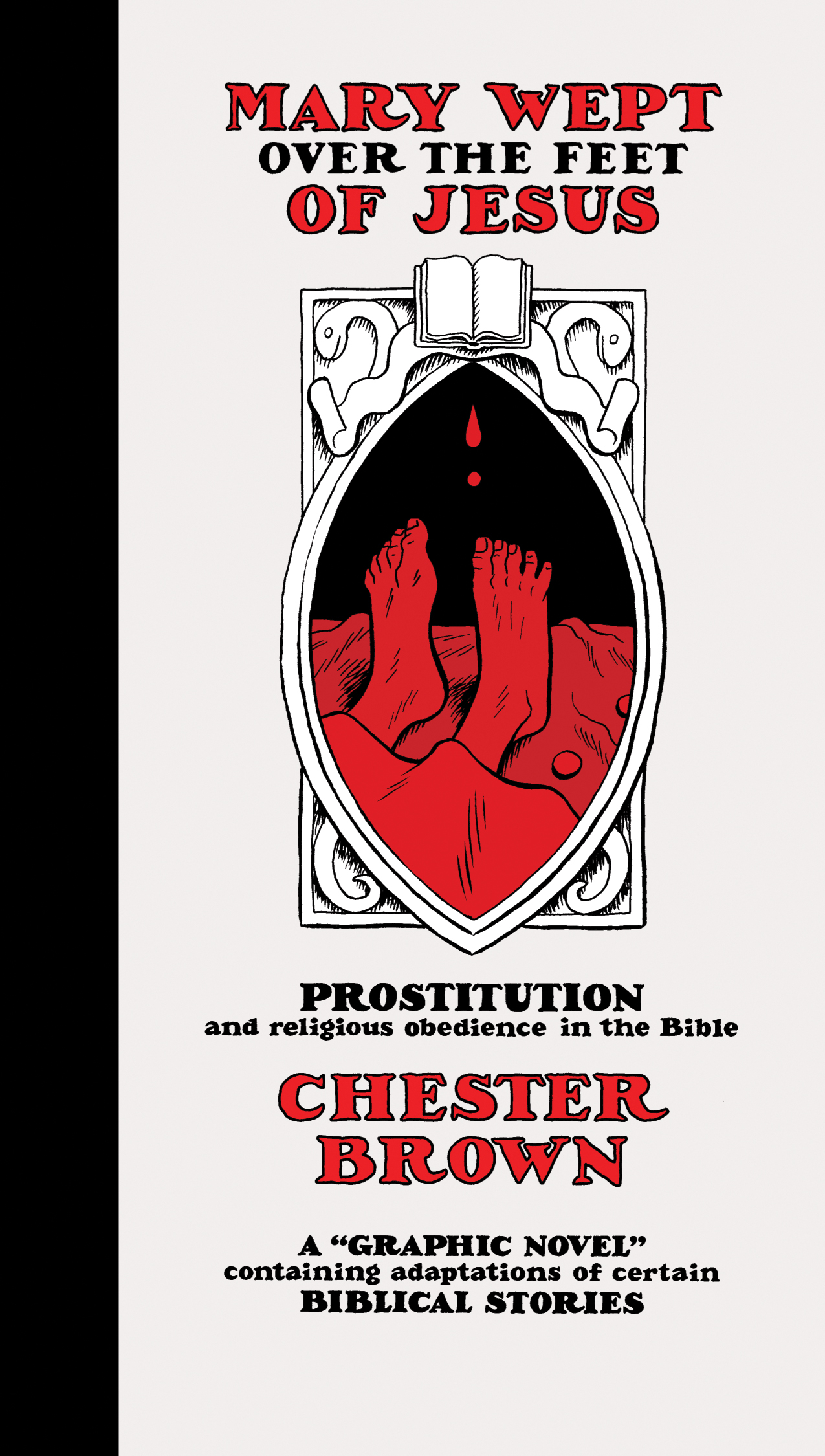 Get Thee to a Library

You might be forgiven for thinking that Chester Brown immigrated to Toronto from J. R. R. Tolkien's Lothlórien. There is an enigmatic, ethereal quality to his presence. A deep and patient thinker, Chester actually immigrated from the slightly less fantastical suburb of Chateauguay, near Montreal. He has lived in Toronto for a long time and when Seth talked, in yesterday's interview, about Toronto "reeking too much of the modern aesthetic" (corporate, featureless, banal), I thought of Chester as an antidote, an embodiment of the older Toronto we both miss. That brick building Toronto of The Kids in the Hall, that neighbourhood-y Toronto where Queen West and the Annex were not yet gentrified, that Toronto populated with used bookstores and divey bars.

His art, rendered with a miniaturist's passion, executed in the scratchy brush strokes of an earlier era, employ texture and earthiness, making a singular impression upon the viewer. It is bricks and bookstores, rocks and trees, decidedly organic. His Louis Riel made waves across the country. The brave, subsequent work, Paying For It, literally has no peer. There is nothing like it in the field of graphic novels. If you haven't heard of this book, run out and acquire a copy; my talking about it will do no good.

This man is nothing less than a national treasure. Can we please, please, please remove the queen from the $20 bill and exchange her for Chester? Chester on one side, Louis Riel on the other: now that's a twenty dollar bill that people would like to handle, fondle, and spend! It'd boost the economy.

Chester's cartooning has changed over the decades. I love the earlier work like I Never Liked You and The Playboy, and especially Ed the Happy Clown. The latter works have become increasingly scholarly, polemicized, and take on a philosophical, even political texture. Buffeted by his constant need to read and think, the art, timing, and composition retain Chester's otherworldly feel. I caught up with him regarding his life and art.

The author photo attached to this blog post was taken by Sook-Yin Lee.

Koom: During the last phase of your career (Louis Riel, Paying For It, Mary Wept at the Feet of Jesus), you've gravitated more and more towards an academic form for your comics. That is, you rely more and more on the end notes which add commentary and inform the content of your comic panels and pages. How conscious is this move?

Chester: I was adding end-notes to my adaptation of The Gospel Of Mark back in 1987, so this isn’t something new for me. The format shift from pamphlets to books has probably given me the sense that I can elaborate more in the prose notes if I want to.

Koom: What is the intention behind the use of end-notes?

Chester: As far as I can tell, I use the end-notes in the same way that other writers do — to note sources and to elaborate on matters that wouldn’t work in the body of the “text”.

Koom: What feedback have you gotten, and how satisfied are you with the results?

Chester: Comics “purists” tend to dislike the notes, while other people tend to like them. I guess the purists think that comics can express everything and anything, so a graphic novel should only contain comics. It seems to me that some things work well in comics and other things work well in prose, so why not use both tools? I’m very happy with the results. I don’t expect everyone to read the end-notes, but they’re there for readers who want more depth.

Koom: How do you feel about older stuff like The Playboy or even Ed the Happy Clown in relation to this more recent phase?

Koom: Well, this wouldn't be the first time you break new ground with your comics so I find the new directions (although as you say, the trend goes back a few decades now) interesting. You garnered a lot of attention for your previous book Paying For It which dealt with prostitution, and was to some degree a polemic arguing for its legalization. Your most recent book Mary Wept at the Feet of Jesus examines the broad topic of prostitution as it relates to stories in the Bible. When I've talked to you, you've always been genuinely interested in the topic of the Bible and Christianity, so some may see your joining of these two topics (the Bible and prostitution) as atypical and strange. Do you have a political reason for this conjunction? Is there some kind of message that you want to come across in the book?

Chester: The three most important points in the book are that Jesus’s mother was a prostitute, Jesus was anointed as a christ by a prostitute, and Jesus contended that prostitution benefitted society. If my interpretations of the ancient texts are correct, I think that’s interesting regardless of the political situation. But, because I pay for sex, I do have a political interest in the subject of sex-work, and those three points are relevant to how the law treats sex-workers and their clients. First, because prostitution was originally criminalized as a result of its condemnation in the Judeo-Christian scriptures. Second, because Christian organizations still publicly advocate for the continued criminalization of sex-work. The secular reasons for criminalizing prostitution are so stupid that they’d be immediately recognized as being idiotic if they didn't have the religious pedigree.

Koom: Your storytelling is somewhat spare and restrained (at least as far as exposition and writing go - visually, it's quite textured), so how do you want readers to engage with Mary Wept At the Feet of Jesus?

Chester: I hope they enjoy it. If one ignores the afterword and end-notes, it can be read as just a retelling of some Biblical stories, and it’s fine by me if readers want to only engage with the book on that level. For those who want a bit more depth, there’s the 15-page afterword. And for those who want to REALLY dive in, there are the end-notes.

Koom: As you've mentioned, you pay for sex and I believe you still have an ongoing relationship/exclusive arrangement with one sex worker in particular?

Chester: Yeah, I’ve been paying her for sex for about fourteen years now.

Koom: This makes you a kind of outsider to society. Even Crumb has a common law partner and daughter! I realize that the term outsider is not a good one (you're not really a Hunter S. Thompson or William S. Burroughs type - our infrequent meetings for tea are often a highlight due to your gentle and introspective nature) but are you aware of or conscious of this distinction?

Chester: I’m not sure that I agree with the implication that all outsiders are like Thompson or Burroughs. Anyway, I can see why it looks like I'm outside of this culture. My interests and concerns aren’t “mainstream”. I don’t watch television; I don’t have a cell-phone; I’m not on Facebook, or Twitter, or other social media. And I have no interest in having a romantic relationship or having kids. I reject a lot of the assumptions that so many people around me have. That said, I don’t consider myself an outsider. I was born into this culture, I understand it, and I generally like it and the people around me. And I don’t think that paying for sex makes me an outsider — a LOT of people pay for sex. It’s just unusual to TALK about it.

I’ll add that the relationship I have with the sex-worker I see regularly isn’t that strange. I do love her, and if you could see us interacting, I doubt we’d look much different from any other couple that’s been together in a sexual relationship for fourteen years. Well, maybe we’re nicer to each other than most couples at the fourteen year mark.

Koom: Obviously, paying for sex has influenced the subject matter and content of your art in recent years, but do you think it's influenced your art and/or writing in a more subtle way?

Chester: I’m trying to think what those subtle characteristics might be. What I'm coming up with is how much I enjoy drawing and the process of creating the work. I suppose the happier I am generally the more that will be reflected in the work, and having a good sex-life does tend to boost one's general happiness. And, thanks to the wonderful sex-worker I see, I do have a REALLY satisfying sex-life.

Koom: You could have made comics without revealing this aspect of yourself.  Are you freer now as an artist? Or conversely, have you felt the need to justify your life's decisions?

Chester: It seems obvious that, the more openly one can talk about anything and everything, the freer one is. Maybe I am just justifying my decisions, but I’m not worrying about whether that’s the case. Other people can worry about that. I’m too busy enjoying my life.

Koom: You made a quip earlier that many couples in romantic relationships are not so nice to each other after the fourteen year mark. Do you feel that conventional romantic arrangements generally breed unhappiness? Why do you think that is?

Chester: The main problem with conventional, monogamous romantic relationships is their exclusive nature. One person has to be the ideal partner. If it was culturally accepted that a person could have several loving, sexual relationships going at a time, then no one sexual partner would be expected to be perfect. Monogamy magnifies the flaws of one’s partner.

Koom: I want to wrap up by asking you about the time you ran for election as a Libertarian candidate. Was this for your federal riding?

Chester: Yes, I ran in what was then called Trinity-Spadina in downtown Toronto. The riding has since been split in two.

Koom: Imagine you had won: how would you have reconciled your duties as a representative with your daily need to research/write/make art? Would it not have been a clash?

Chester: If I had won, I suppose I would have had to set aside my career as a cartoonist for a few years, but that was never a concern since I knew I wasn’t going to win.

Koom: I also, given your quiet introspective nature, have a hard time seeing you in office. What did you hope to gain by the endeavour?

Chester: I have some small public profile and I wanted to use that to bring a bit more attention to libertarian ideas.