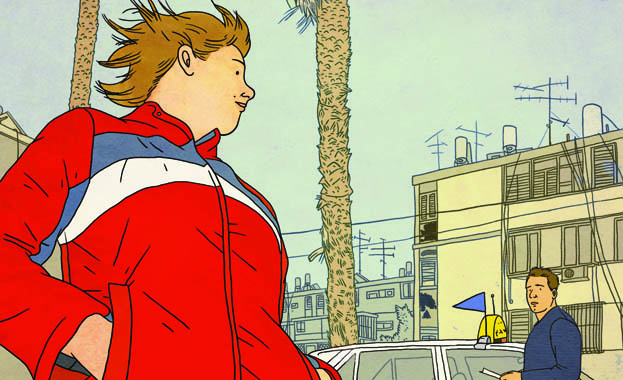 In the graphic novel Exit Wounds, Israeli taxi driver Koby Franco finds himself on a reluctant quest to discover the fate of his estranged father after being contacted by a young female soldier who believes the elder Franco has died in a suicide bombing. Nothing is quite as it seems in this offbeat romantic comedy from Rutu Modan, one of the best artists to emerge from the vibrant Tel Aviv cartooning scene of the past decade. The story of her first booklength work moves along at a brisk clip, urged on by a series of small but jolting revelations, starting with Koby’s discovery that Numi, the awkward woman who sought him out, is his father’s girlfriend.

Modan’s art is a pleasure, her deadweight yet idiosyncratic line work dividing up fields of saturated, mottled color. In addition to the texture it gives the pages, her color acts as a powerful narrative tool, guiding us from panel to panel and signaling moods and emotions. The backgrounds often fall back in monochromatic cool blues and earthy browns, tones that are slightly muddied to suggest a sense of depth, in turn allowing the brighter hues in which the characters are drawn to stand out. These details create a powerful sense of place, economically portraying the modernist architecture and open, flat spaces of Tel Aviv and its environs.

Modan’s storytelling is likewise rich with subtle detail and nuance. The inevitable themes of politics, religion, and identity are addressed only obliquely; those looking for a grand statement on contemporary Israel are likely to be disappointed. Modan’s tack instead is to concentrate on the mundanities of life as experienced by Israelis, life beyond the familiar images of young sol- diers, peace activists, and the continual threat of violence. She reveals an Israeli daily life not unlike that in the United States—a point ironically underscored by the occasional but prominent appearance of American corporate logos throughout the book. (One of Exit Wound’s most poignant images, a makeshift shrine to the victims of a suicide bombing, is made faintly surreal by the fact that the shrine is made from an unused Coca-Cola display unit.) The appearance in the story’s margins of Romanian and Filipino immigrants also suggests a more complex societal structure than the Arab/Jew binary that typically makes its way into American media.

Yet from behind Modan’s bright colors and low-key but witty repartee emerges a rather bleak view of human relationships and of men in particular (although women, such as Numi’s status-obsessed mother, hardly escape unscathed). Most of the male characters in the book are self-centered, womanizing boors, and the few exceptions are emasculated losers like Koby’s feeble uncle Aryeh and the comically unsuspecting cuckold who greets Koby and Numi at his door wearing a flower-print apron. This depressing choice of role models seems to be what has frozen Koby in a state of bitter, prolonged adolescence, and it is his struggle to break free of this stasis, even more than Numi’s search for closure, that is the true soul and motivating force of this modest but affecting work.