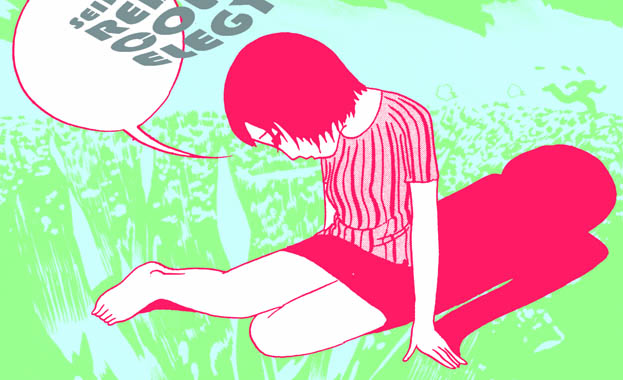 Graphic Novels Are Getting Deeper

If graphic novels (or comix, or bandes dessinées, or comic-strip novel, or all of the above), now with their own section in major bookstore chains, are in danger of becoming too mainstream, the sheer length of time some take to hit the shelves should keep them from becoming beach-reading bestsellers. But this sense of authors slaving away over their craft only makes them seem cultishly literary and more novel than graphic sometimes. Plus many graphic novels are, like their purely textual cousins, more and more concerned with drawing out small, painful human experiences on the page than surrealizing other worlds, showing super-heroics or animating animals.

Novelist Sherman Alexie pointed out the literary realism qualities of Jason Lutes’s melancholy debut, a tale of fading magicians, Jar of Fools (“I think Jason Lutes writes like Hemingway ... but he draws like Faulkner would have drawn”). Then Lutes settled into one of those slave-away spells (see: Spiegelman, Art; Ware, Chris), taking two years just to research and blueprint his trilogy about late 1920s and early ’30s Berlin. Now, seven years after Berlin Book One gathered the eight-issue first part, in drifts Berlin Book Two: City of Smoke.

The lovely tension between picture and text continues, with young artist Marthe Müller and left-wing journalist Kurt Severing, having struck up a romance in Book One, now struggling to reconcile her enthusiasm about the riotous culture of Berlin and his deepening cynicism about the politics in the Reichstag. Book One drew out a motif of perspective—artistic, social and more philosophically. Lutes doesn’t build quite as complex an architecture for City of Smoke—though that’s the only clue that this part is the trilogy’s bridge between beginning and end—but key elements have become only more complex.

Sexuality in the bourgeois corners of Weimar-era Berlin, with its cabarets, jazz clubs and private parties, has become smokier, more fluid. The book brims over with sensual scenes. After the May Day massacre of 1929, the country is becoming more polarized into fascist or communist as the ruling Social Democrats weaken and the Great Depression nears.

But Lutes is doubly ingenious in reflecting the period. First, he shows the none-so-simple people within those polarities: the gay, unemployed immigrant who is curious about this new National Socialist party, the schoolteacher who marched on the side of the “Reds” but is now told by her husband to support fascist order. Lutes’s interest in so many common lives beyond his protagonists—not that Marthe or Kurt are heroes at all—not only widens the book’s scope but offers a generous portrait of a Germany threatened by violence and autocracy.

Second, Lutes’ addition of an American jazz band not only further mirrors the racism of the day, but leads to a small, personal answer to the political questions that Germans like Kurt are feeling powerless to resolve.

The panels, with their attention to the details and atmosphere of the streets, clubs and even countryside of Weimar Republic Germany, accumulate in power. A moment of violence rents the page with a shock. A clarinet jazz-player riffs through the panels. Political debates around a table actually come alive. (Not least because, sadly, polarized political fronts and a plunging economy are still bitter facts of life.)

This is the kind of work that will become a landmark of the comic-story form, not so much because it redefines it as elevates it to such a purely powerful level. City of Smoke transcends poetic glimpses, photographic angles, cinematic cuts and a novelistic scope to reaffirm the ultimate uniqueness of the genre.

The pair in Seiichi Hayashi’s Red Colored Elegy—which focuses so unblinkingly on the human that some panels offer one or two people adrift in white space—isn’t as odd as in Slow Storm, but their dilemma is expressed more strikingly. First issued in Japan in 1970-71, Hayashi’s book offers a startlingly different dialect of comic language. Sudden cuts, simple drawings spliced with moody full-page images and a story that moves in emotional bursts—it’s easy to see why the book was likened to French New Wave cinema.

Ichiro and Sachiko are drawn in a naïve way, befitting their youth, but their sad earnestness brings them alive. The ennui of modern life rubs up against family traditions; a son, made callous by the daily urban grind, tries to shrug off his father’s death. A woodcut-like image of Fuji above roofbeams follows panels where the couple, struggling to get by on cartooning work, fight or plead or draw with slashes of energy. The effect is electrifyingly angst-ridden. Even stripped down to minimal prose and often spare pictures, this old book shows once again how the genre keeps finding new ways to draw out just how humans feel so caught in one time and place. V

Lutes at Forefront of Graphic Literature

Why does the inclusion of illustrations in works of literature act as a dividing line between adult and juvenile readers...

There’s something of the technician about Lutes, a chilliness that obscures his sophisticated plotting and strikin...

November 27, 2002Berlin, by Jason Lutes, tells the story of a journalist and an art student living through chaotic polit...