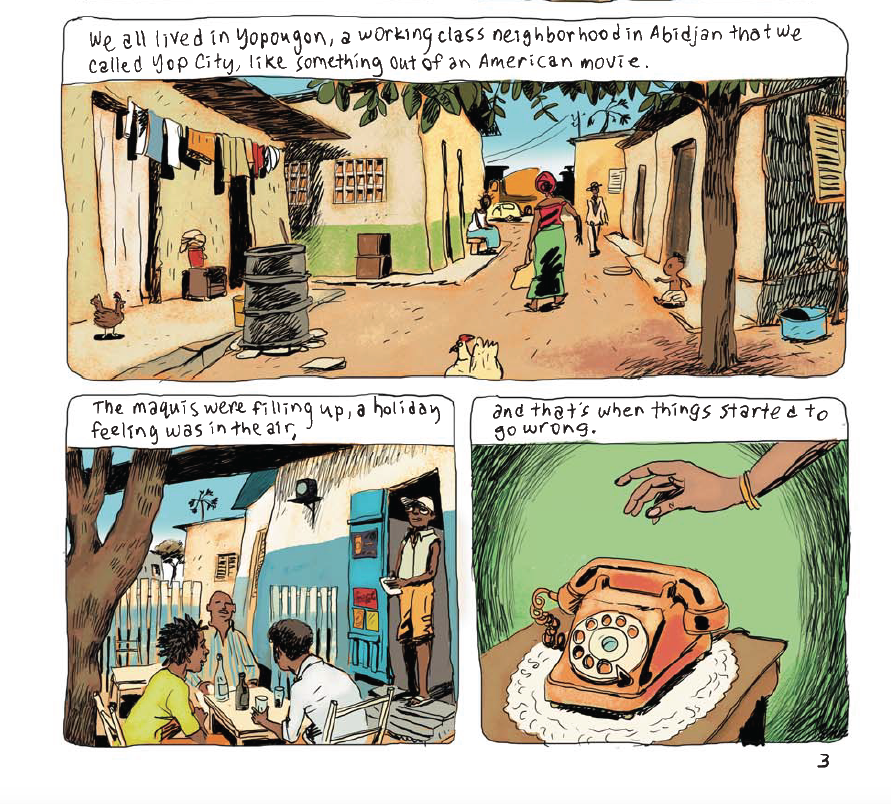 Aya and Berlin showcase the architectural design of graphic novels

The Graphic Novel as Architectural Narrative: Berlin and Aya

The comic strip, la bande dessinée, the graphic novel. These are all part of a medium with an intrinsic connection to architectural storytelling. It’s a medium that has long been used to fantasise and speculate on possible architectural futures, or in a less spectacular context, used as a device to simply show the perspectival journey through an architectural project. When the comic strip meshes fiction with architectural imagination, however, it’s not only the speculation on future architectural scenarios that takes place. It’s also the recording and the critiquing of the urban conditions of either our contemporary cities or the cities of the past.

Les Cités Obscures ­­– the Belgian-French graphic novel saga – is in the former category of architectural speculation. It’s a science-fiction fantasy series set in a world where humans live in independent city-states, each characterised by a distinctive architectural style. There are two graphic novels though, that speculate on architectural pasts instead – Berlin by Jason Lutes and Aya: Life in Yop City by Marguerite Abouet and Clément Oubrerie. The architecture in these stories is far from being the most significant part of their narratives. Nevertheless, architecture is a prominent theme in how characters navigate the worlds they live in, and how as onlookers they see their cities evolve through time.

The two novels are set worlds apart from each other. Aya is set in an Ivory Coast 18 years removed from its independence from France, while Berlin’s story spans the fall of the Weimar Republic in the German capital. These are two narratives that portray remarkably different architectural styles – 1978 Abidjan is a thriving metropolis that has looked to Modernism and Post-Modernism to establish an architectural identity, while 1928 Berlin is a city culturally in the throes of the Bauhaus movement but with an eclectic mix of architectural styles.

Aya is the story of a teenage girl – Aya – as she grows up in the complicated urban centre that is Yop City. Yopougon – Yop City’s formal name – is one of the more populous suburbs of the Ivorian capital, a suburb trying to reap the benefits of Ivory Coast’s economic boom. A large majority of the novel takes place in domestic settings, and it is in these spaces that the artwork of illustrator Clément Oubrerie provides an illustrative evaluation of how dwellings function as markers of privilege and struggle.

The titular character is from a working-class family, living in Yop City’s crowded neighbourhoods. The close proximity of dwellings to each other creates a vibrant, communal area, where social interaction is commonplace. Domestic duties such as the washing of clothes, done by women in this patriarchal setting, are done in the common space shared by dwellings, where neighbours hang clothes on communal clotheslines whilst holding conversations. Cooking and child-rearing also become communal activities, the shared streets running through the backs of houses becoming spaces of exchange and commerce. This close proximity, while fostering a sense of community, is a source of tension for Aya, who feels constrained amidst a lack of privacy both in her house and her neighbourhood.

In high-income dwellings however, privacy is abundant, maybe even overdone. The house of a major antagonist is emblematic of this, a marker of how Ivory Coast’s economic boom heightened class divisions. The dwelling is pastel-pink in colour, a Modernist cube of a house with oversized proportions. An imposing spiked wall keeps unwanted visitors out, surrounding a vast compound. In the background, a barren, sandy-brown stretch of land. It’s a microcosm of Ivorian society at the time – the Modernist, expensive, fortressed house as a status symbol while the wider population must make do with small, constricted dwellings.

Jason Lutes’ Berlin, on the other hand, dwells on similar themes. Its wide-ranging narrative with multiple story arcs includes that of art student Marthe Müller, arriving in Berlin from Cologne and later striking a friendship with journalist Kurt Severing. Like Abidjan, Berlin is a city of contrasts. The centre of the city is displayed as a vibrant and modern settlement, grand buildings framing streetscapes populated with people, modern cars, and an extensive tram system.

The newspaper house where the journalist works is in this central area, while Marthe’s ultimate destination is an area neglected by the state. The townhouse she ends up moving in is dilapidated and poorly maintained, a mid-rise tenement common in the working-class areas of Berlin. These tenements, known as Mietskaserne, were typically rented by migrants from the countryside, with equally-sized rooms grouped around a corridor in a square, oblong, or L-shape. The arrangement and floor plans of the apartments meant that poorer residents tended to get worse light and sanitation.

The aerial view, in both novels, acts as a useful freeze-frame for a holistic view of both Berlin and Abidjan. In Berlin, characters look out from the rooftop of a building in the central part of the city, noting the Town Hall, Brandenburg Gate, and the Palace clustered together. Built in the Renaissance, Neoclassical, and Baroque styles, they are symbols of affluence in a deeply divided city. On another side of the city are tenement slums and rental barracks, where living conditions were poor, and space was severely limited.

Abidjan in Aya from above is also represented as a city of extremes. One panel in the book features a wide four-lane road, bounded on one side by two houses of considerable size, and on the other by glazed tower offices. It’s an apt representation of a city undergoing a post-colonial economic boom, where state and corporate architecture features vanity projects ill-suited to the local climate, and where dwellings for the well-to-do take up exorbitant amounts of land.

The graphic novel remains an extremely powerful medium for reflecting on what we have built and what we can build. Berlin and Aya are two powerful stories that are effectively documentaries with a narrative element, where architecture is used to make sense of the worlds the characters live in.
Berlin (Paperback)
Jason Lutes

Aya and One Eye in Onion

Apparently, cartoonist Charles Burns’ predilection for juxtaposing the mundane and the bizarre extends to his phot...

Aya, We Are On Our Own and Abandon the Old in Tokyo picked for Booklist's top 10 Graphic Novels

EXIT WOUNDS and AYA nominated for the Quill Awards

Two D+Q titles nominated for The Quill Awards. In the graphic novel category, we have: Exit WoundsRutu ModanDrawn &...