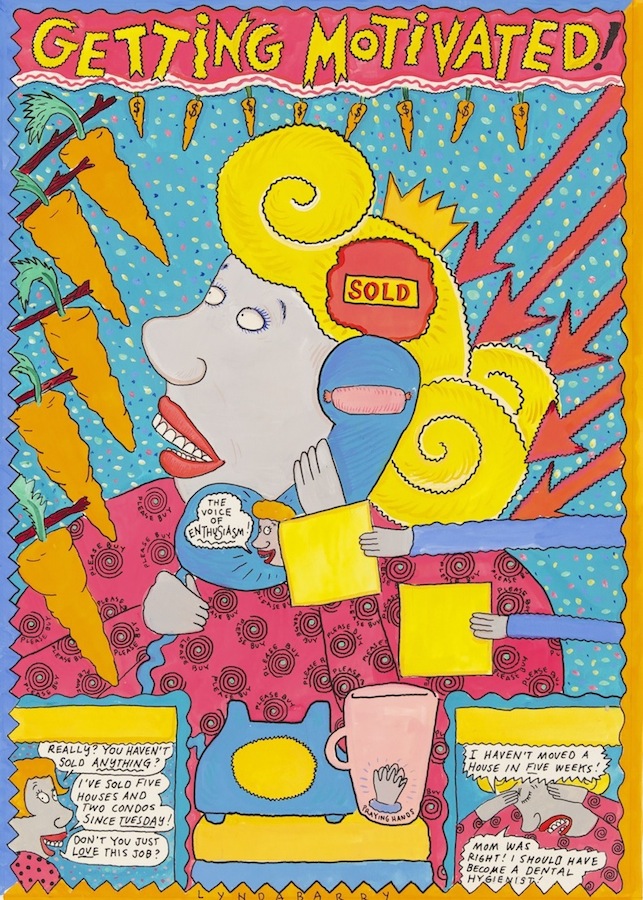 Legendary cartoonist Lynda Barry has her first solo show in New York. “Everything: Part 1,”on view at Adam Baumgold Gallery through July 11, surveys Barry’s 35-year career as a leading figure in the post-punk, alternative-comics scene. Known for her distinctive DIY style—crude but evocative line drawings surrounded by swaths of hand-written narration—Barry has pushed boundaries in the male-dominated field of comics by highlighting the viewpoints of women and children and using humor to confront controversial subjects ranging from race to sexuality to abuse.

While tackling taboos through content, Barry has also challenged the conventions of genre in her work. She forged new ground, first by focusing on storytelling in her comics and then by prioritizing visual art in her two acclaimed novels: The Good Times Are Killing Me,which was adapted into an off-Broadway play, and Cruddy, which the New York Times called, “a work of terrible beauty.”

Two of her award-winning books, What It Is and Picture This: The Near-Sighted Monkey Book, both on view at Adam Baumgold, have created an entirely new genre alltogether: “graphic memoir/how-to” books.

“Everything: Part 1” begins with new pages from Blabber, Blabber, Blabber: Volume 1 of Everything, an introduction to Barry’s career with collaged pages of her artwork and personal photos. The pages selected also include the artist’s best-known comic, Ernie Pook’s Comeek, a syndicated series that appeared in over 70 newspapers throughout the United States for 30 years.

Also on view are selections from One Hundred Demons, a collection of comic strips from her later column in the “Mothers Who Think” section on Salon.com; The Freddie Stories, culled from the Ernie Pook’s Comeek series; and selections of Barry’s comic strips that poke fun at menopause, work-related stress, one-night stands, and other topics that Barry assumes you’re probably uncomfortable talking about.

Comics, long relegated to the back pages of art history, have been elevated in recent years, beginning with the 2005 “Masters of American Comics” exhibition in Los Angeles. But women comic artists like Barry were infamously excluded from the show. “Everything: Part 1” presents a rare opportunity to fill this hole in the cultural archive and view the breadth of work by someone from the other half of the population.

Now an assistant professor of interdisciplinary creativity in the art department of the University of Wisconsin-Madison, Barry encourages a new generation of would-be cartoonists to believe in their own inherent artistic abilities. Her unorthodox drawing courses and her innovative Image Lab, which is part of the Wisconsin Institute for Discovery, provide the opportunity for Barry to examine the physiological effects of art-making with students from different disciplines and community members of all ages.

Why are comics your art form of choice?

I was in a lucky position when alternative papers existed all across the country and wanted cartoonists who were different. So, I could use comics to write about serious stuff. But it took people a couple of years to realize that I wasn’t making a joke.

Comics are like songs. You can sing about anything–about love or about minors being treated badly. Art Spiegelman broke that open for the whole world with Maus. Imagine that pitch! If there was any question about what comics could do, he answered it.

It turns out to be one of the most moving and powerful things about it all. Crying and laughing come from the same place. I was able to carve out a space, another side of comics.

Many of your comics read like a kind of call to arms for non-artists to express themselves creatively. Why is this important to you?

I don’t think there’s any other reason we have art than to save us, the way our liver is there to keep us alive. I have come to regard the arts as external organs. They have always been as critical to me as my kidneys are. It’s like a dialysis machine you draw yourself.

I trace that right back to elementary school, bonding with the first place I felt really safe and cared for with pencil and paper. If you were drowning in the ocean and came to an island, you’d love every bug on that island for the rest of your life.

Is that why you decided to become a teacher yourself?

Teachers played the biggest role in my life and to be a teacher is to continue a certain kind of family line for people who don’t have families.

It’s my way of being a mom. No, not a mom–the crazy auntie that everybody needs. One of my students calls me “Auntie Monkey Glasses.”

What are you tackling in your upcoming book Syllabus: Notes from an Accidental Professor?

How does one teach this? That’s one thing. The university gave me the opportunity to bring people together from different backgrounds. I have PhD students studying math or genetics or engineering alongside art students.

I try to attract people who are confident drawing and those who gave up when they were 9. What’s fascinating about the people who gave up at 9 is that their drawing style is intact from then. And these people don’t realize how valuable that is. It’s like watching a baby walking around with a vase, hoping it doesn’t break.

That’s what this book is really about. It’s not, “everybody can draw like Michelangelo!” with rainbows around it. It’s about this other astonishing ability that lays dormant in people’s untrained hands.

Some of your comics feature dance, which is also presented as a liberating creative activity. Do you see a connection between visual art and dance?

Dance is very much tied to this idea of image-making. I sometimes surprise the class by demanding they do the Hokey Pokey. I say we’re doing something very tied to the act of creativity. Or they’ll sing with me. We memorize a lot of poetry and recite together. There’s something about doing things in unison that’s very powerful.

In one of your comics, you say that babies and grandmas are “keepers of the groove” because they help us remember to dance, even if we can’t dance well. Do you think people become more free about these things as they age? Especially grandmas?

I think it depends on the grandma. A grandma among grandmas is one thing, but a grandma around kids is a whole other personality. But there’s no two ways about it—something about getting older loosens you up, the self-consciousness finally drops away.

That’s my big news for women. When they talk about menopause, they hold it in front of you like Medusa’s head. They tell you about all the stuff that will start to change in your body but no one tells you that you won’t care. It’s a really good thing.

How would you guide non-artists to draw who aren’t lucky enough to be able to visit your lab?

I always say this. You can do it immediately: draw a hand, then a beak then, then a cigarette. I propose drawing that and it makes people laugh–what the hell is that?

Even in writing classes it’s the first thing I have people do and they get giddy and that connection has been broken through. That’s what I’m curious about: Why can imagining that make us feel better the way a good beer can?

You ask many philosophical questions about art in your comics.

“’What is an image?’” Marilyn Frasca asked me that when I was 19 and I’ve been trying to answer it ever since. You can answer questions in essay form but the problem with trying to write an essay is we immediately try to impose a structure. There’s this weird internal logic that’s important to find first before giving it form.

I also like presenting a question in a way that makes people feel like they have a chance to answer it themselves. “Where is a story before it becomes words or after it becomes words?”

It’s not in the real world and it’s not fully in the imagination. I love that kind of weird open feeling it gives you, not knowing in a delighted way. It’s rare in life and very sweet to chase after it.