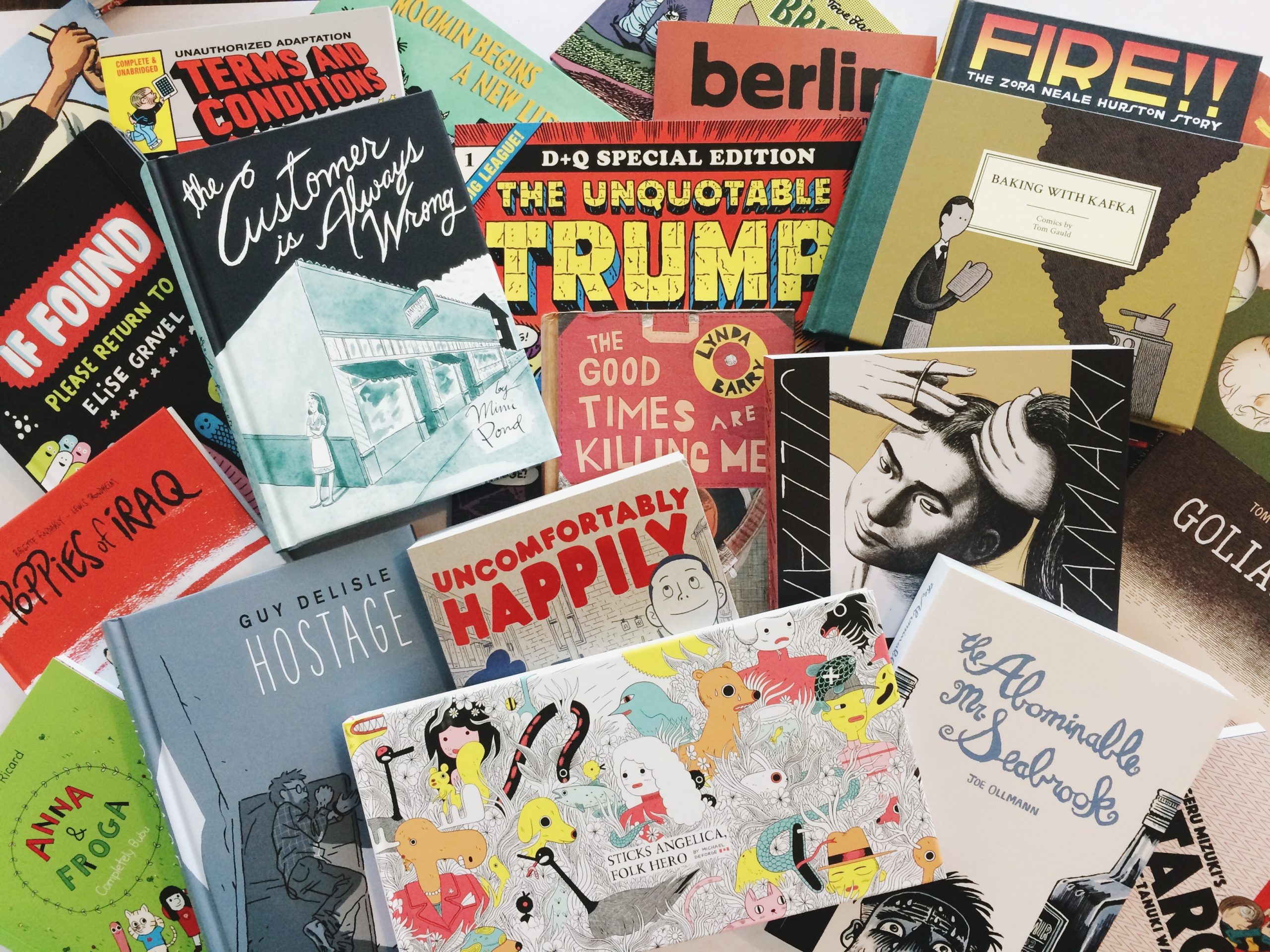 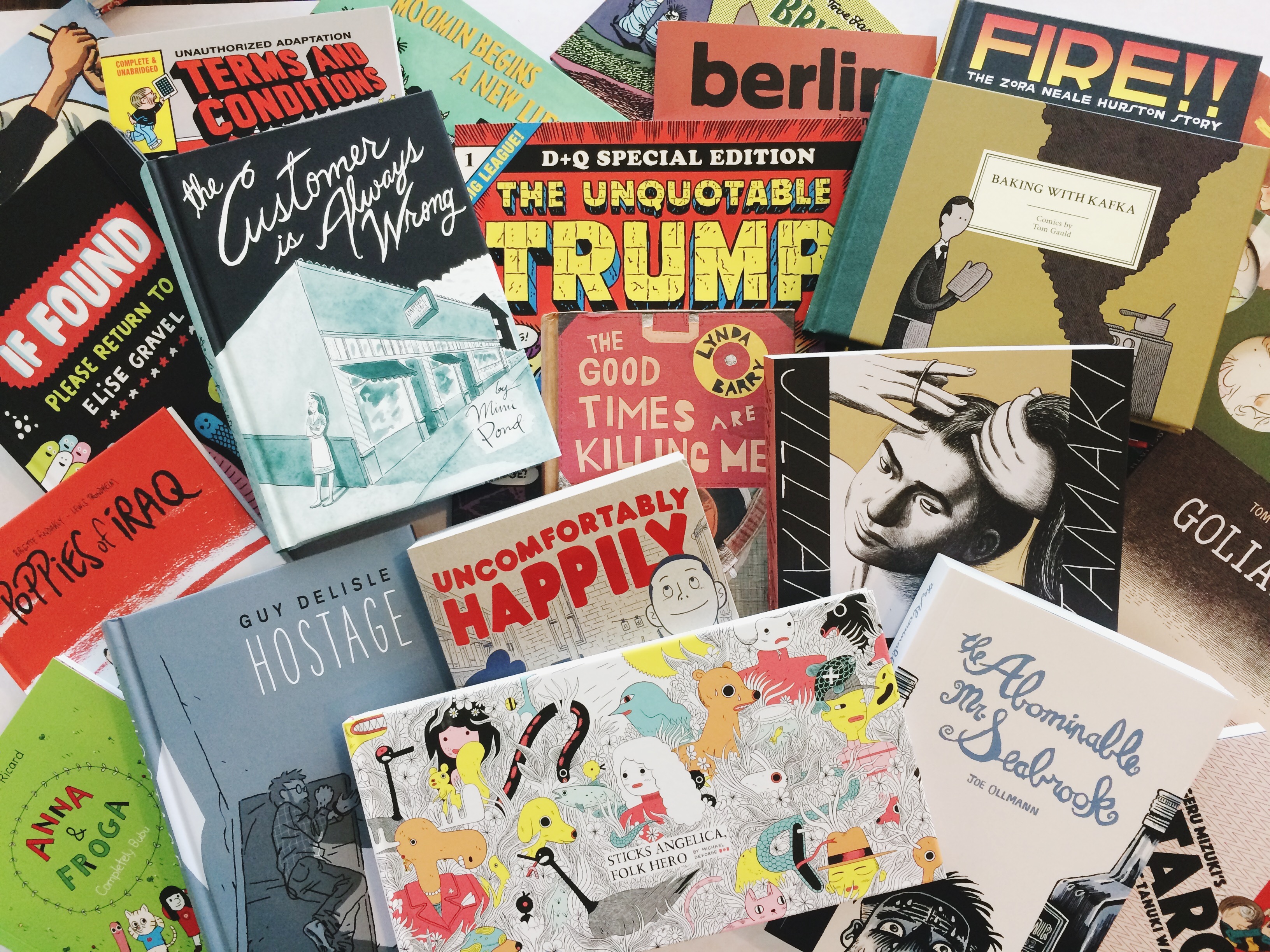 This year we had the honor of publishing a total of 28 books! Here’s how it breaks down: 5 of those titles were created by Canadians, 7 were works in translation (including our first-ever Korean translation), 5 were reprints (two of those were re-issues by the one and only Lynda Barry) and 2 new titles from R. Sikoryak!

I wanted to remind you of a few gems from this year. Like, Mimi Pond’s The Customer Is Always Wrong which came out hot with a Kirkus starred review, an excerpt in the New Yorker, and a review in Under the Radar describing it as “an absolute masterclass in cartooning, character, caricature, and storytelling.” Or Yeon-sik Hong’s Uncomfortably Happily, translated by the wonderful Hellen Jo. Heartfelt and heartwarming, Yeon-Sik’s book in translation was called a “candid, engrossing tale” by the Atlantic, and has been praised by GQ and the LA Review of Books, to name a few. We also had the engrossing biographies Fire!! The Zora Neale Hurston Story by Peter Bagge, and The Abominable Mr. Seabrook by Joe Ollmann that proved that the life of writers, artists, and troubled souls could indeed be stranger than fiction. Guy Delisle’s Hostage was a taut thriller that enthralled readers nationwide, which the New York Review of Books called “a travelogue of the imagination.” Clearly the award for Best Biography of a Fictional Canadian will go to child-actor-turned-marathon-runner-and-cartoonist Michael Deforge for Sticks Angelica. Folk Hero.

Brigitte Findakly & Lewis Trondheim’s Poppies of Iraq came out sprinting with starred reviews from Kirkus and Publishers Weekly, a book of the month in the Guardian, and a review in the Boston Globe, wherein it was called “poignant and powerful… a meditation on the ache and longing for a place you can no longer return.” Jillian Tamaki’s Boundless was called “restlessly versatile” in the New York Times Book Review  and has already appeared on the Publishers Weekly Best of 2017. And capping the year we have The Unquotable Trump by R. Sikoryak – an oversized, excellent satire that donates 25% of its net profits to the ACLU. It’s great – it’s grand – it’s big league. A lot of lists might end up with only one entry and that’s because Leslie Stein’s Present will wipe clean the memory slate of even the most seasoned journalist and it will be all they can think about! After everyone finishes wiping the tears of laughter from their eyes they will add the hilarious Baking with Kafka by Tom Gauld to their definitive lists…

In short, it’s been a great year. Check out our 2017 releases above and below. 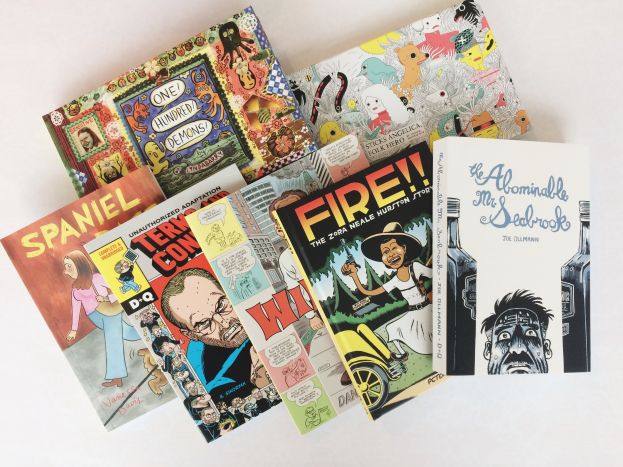 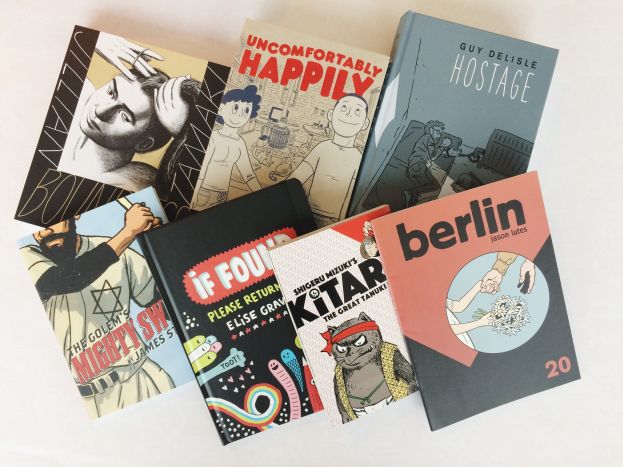 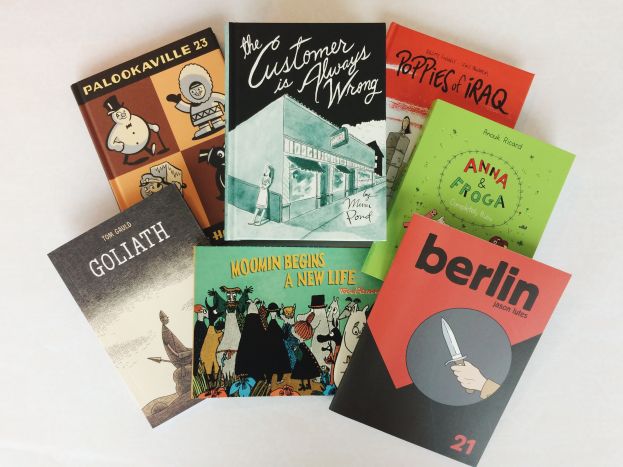 The Customer Is Always Wrong by Mimi Pond — August 8th, 2017 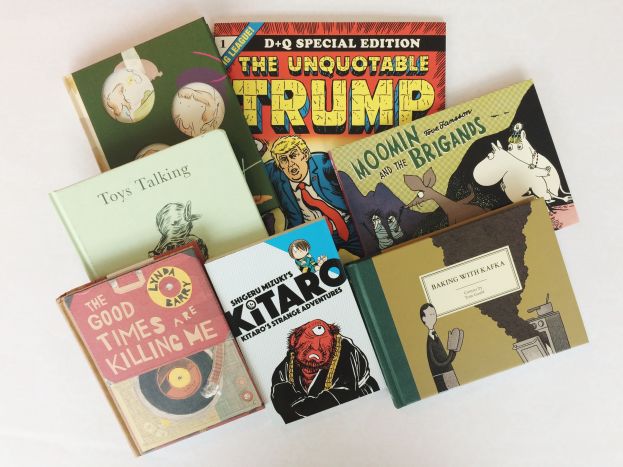 Moomin and the Brigands by Tove Jansson — December 5th, 2017