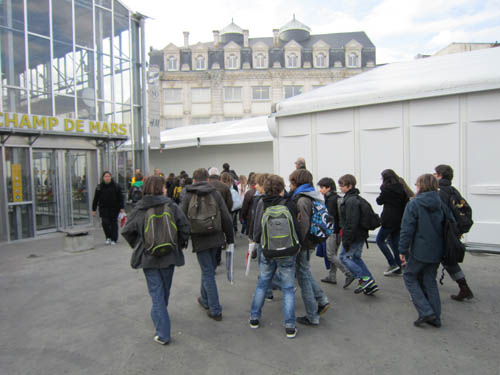 Attending Angouleme is like visiting your long lost relatives back in your homeland. Some people you meet, it’s so natural, you have so much in common, it’s like they’re your sibling. Others you share some traits and others you meet them and you wonder how you’re related at all! But no matter who it is, everyone is very kind and welcoming. Thanks to Ivanka, Caroline, and my foreign rights crew (Alex, Calista, Todd, Carol, and Mark) for a great trip.

Attending Angouleme is like visiting your long lost relatives back in your homeland. Some people you meet, it’s so natural, you have so much in common, it’s like they’re your sibling. Others you share some traits and others you meet them and you wonder how you’re related at all! But no matter who it is, everyone is very kind and welcoming. Thanks to Ivanka, Caroline, and my foreign rights crew (Alex, Calista, Todd, Carol, and Mark) for a great trip.

One thing you notice at Angouleme are the HORDES of school children attending the show with their class. You basically have to step out of the way to let them by. 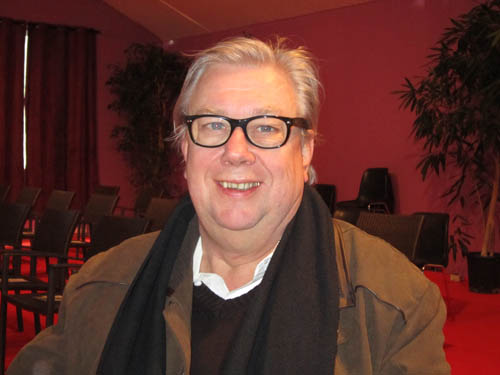 I spent most of my time in the foreign rights tent where I was able to meet Hansje from lengendary Oog & Blik. He’s the best! Thomas from Dargaud, Dash’s editor I believe, and the “Anders Nilsen” of France, obvs. Liniers came by the table to say hi to Tom and I, I noticed they have the same D&G glasses I spent a lot of time in the foreign rights tent meeting all of our foreign publishers that I have been emailing with for years. This is Steffen from Aben Maler in Denmark, who was kind enough to have our meeting outside the tent over crepes. Hmm, here’s a little bomb, not only did he publish Jimmy Corrigan, but he lettered the whole damn thing! Took him a few months to say the least… I had a few free moments so I slipped by into the tent with the “big guys” (Glenat, Delcourt, Dargaud, Dupuis, Gallimard) and it may have been the one time I was actually by myself. I realized that since I’m usually the one behind the booth, I have no idea how to schedule appointments. I basically scheduled eight a day on the hour. Ok, back to photos, this is the Delcourt booth, and that is a snapshot of Le Jour Du Marche (sounds familiar?) as it was up for the festival’s prize. I spied our new favorite at the D+Q Librairie, Anouk Ricard, signing her new book Patti at the Gallimard table. Tom loves her drawing style and since he can’t read french and they are for kids, gives them to the precocious nine year old, Esme, who lives behind us, who gave them her seal of approval. Anouk was up for the prize, as well. Expect to see her books in English soon. 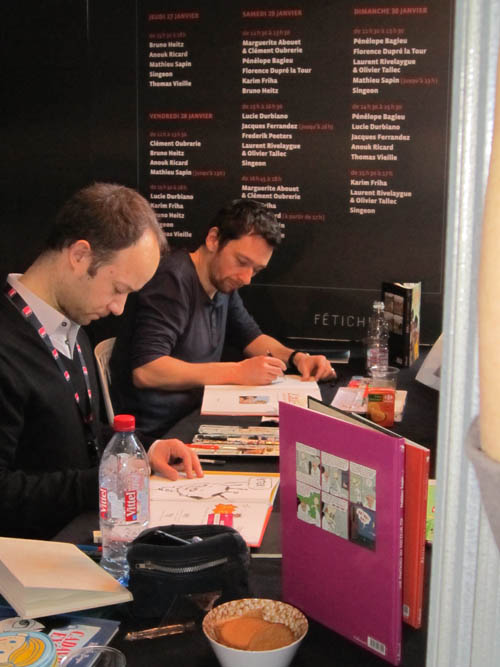 I was very fortunate to see Clement Oubrerie of our AYA series signing at the Gallimard table. This one is for Alec Longstreth! Tom and I were strolling the Nouveau Monde tent, and when we stumbled upon this table with Aisha Franz, Paul Paetzel, and Till Thomas. Till recognized Tom and started to get very excited and explain how seeing Highwater Books prompted him to start his own company. This is particularly sweet as this is just how Tom feels when he met Jean-Louis of Cornelius (who is actually publishing two Highwater Books, Marc’s Shrimpy & Paul, and Ron’s Skibber Bee Bye). Our Quebec pals, La Pasteque, have a great corner set-up. Here is Frederic Gauthier and Liniers. Where is Martin Brault? OK, I admit it, when I saw Joost Swarte (pronounced YO-st Swart) at the Chat Noir while meeting with Oog & Blik’s Mara, I got all “fan-girly” though I don’t know what they call this term in France. I met him, and he is just as you would hope, extremely friendly and fun. I gave him our John Stanley FCBD issues which he said he would read at lunch. When our own Bob Sikoryak showed up at our booth, I introduced them. Who knew that the meeting of these RAW alumni would be so prescient with the much deserved Art Spiegelman announcement? Art, I have some ideas for 2012, give me a ring! (as if.) 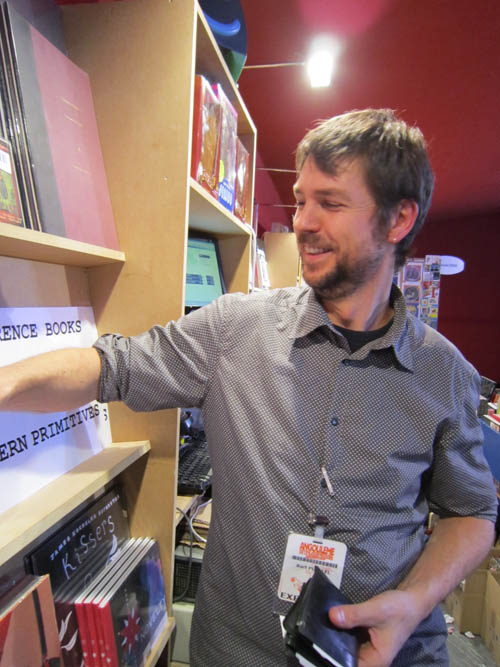 Tom pointed this out yesterday, but yes, I did get Bart of Pinceel to hang up a sign that said Drawn & Quarterly, that’s my job folks. He’s joking here, by covering up our name. Bart is the sweetest, and I really debated heavily in my mind about whether to buy the Press Pop’s Raymond Scott set for Tom, but stopped myself. Where would I pack it? I was just saying to someone (maybe Spurgeon?) that I have spent more time with Yoshihiro Tatsumi than I have with Lynda, who I didnt meet in person until APE in October 2010. Well, the same goes for Rutu Modan, who I was finally able to meet. I spied her at the Pinceel table reading Lynda’s book. Rutu is fabulous! And she let us know that she is doing a kids book which has been bought by a prominent American publisher. We have some news as well that I’ll announce at a later date. Montreal in the house! Here’s Jimmy Beaulieu and David Turgeon with Tom. Then we were whisked off by bus to a secret location for the Glenat dinner, which was fabulous. Now, I’ve worked for DC Comics, so I’m not going to play like I’m a poor field mouse, but the French know how to host dinners large or small, that’s all I’m saying. C’est magnifique! I’ve got to up my Pokeez game in San Diego. Here’s Mark from Archaia with his girlfriend Monika and our super, very friendly and funny host Etienne Bonnin who I share a special “losing your voice during a convention” bond with. Glenat, as well as L’Association, publish the fantastic Nine Antico, who seemed to me at least the belle of the ball in Angouleme. She came to the Glenat dinner so we were able to meet her and sing her praises to her in person. Both of her books, Coney Island Baby and Girls Don’t Cry, were nominated. Am I overstating the buzz about Nine in my usual publicist over the top way? When I got to Paris, I opened up a glossy magazine and there was a two-page spread of Nine! I’m pretty sure she’ll make her American debut soon. 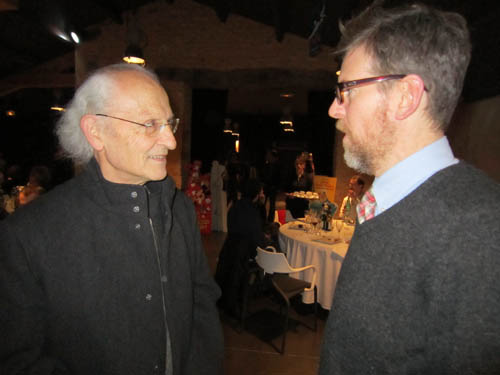 How do you find one artist who will awe the wide variety of American publishers you are hosting? One word people: Moebius. Here’s Tom telling Moebius how much he enjoyed Blueberry. And back to the old Chat Noir to end the night. Here’s L’Asso artist Florent Ruppert and festival winner for the french edition of our book The Wrong Place, Brecht Evens. OK, here’s my number one thing on my to-do list when I get home to Montreal. GET BRECHT TO THE US. (so I can see him in action with Frankie–those two would be Trouble) He’s a rock star, people, with so much charisma and talent it awed all of Europe. Everyone has an edition of his book. And so, it’s a Brecht Evens tumblr. Alex Bowler in the front. 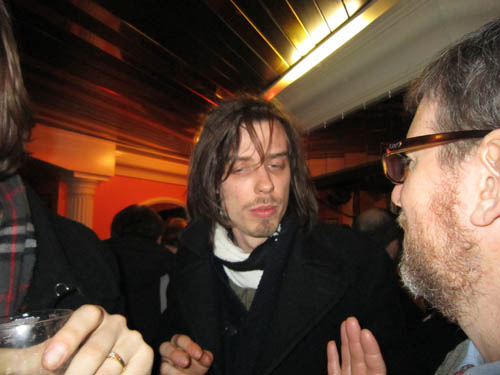 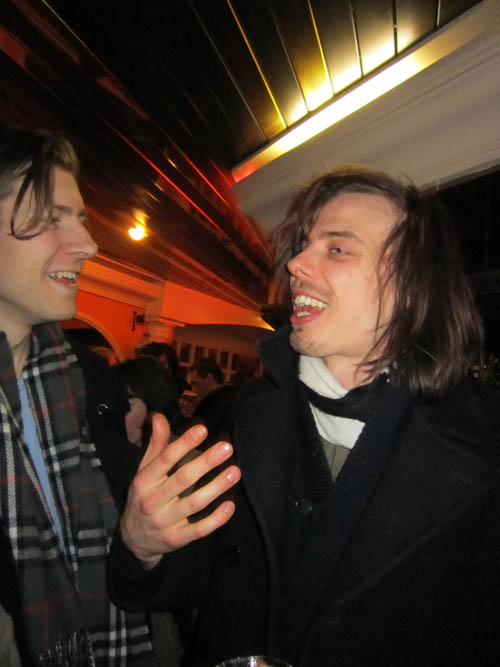 He had the whole place under his thumb. And his award is well-deserved. If you haven’t read The Wrong Place yet, watch out for my Angouleme Day Four post tomorrow. His art will blow your mind. 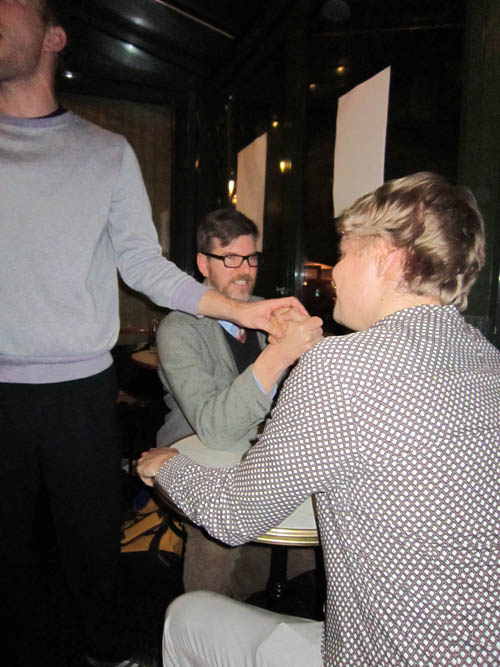 It turned out that Florent Ruppert was emceeing an arm wrestling tournament and of course who volunteered to go up against the Finnish Champ Tommi Musteri? Tom. Of course. 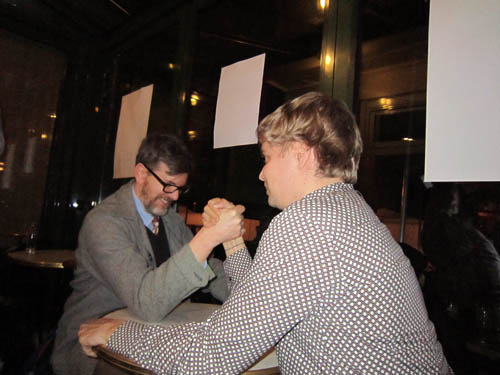 Tom put up a good fight. Really he did! Check it out for yourself.