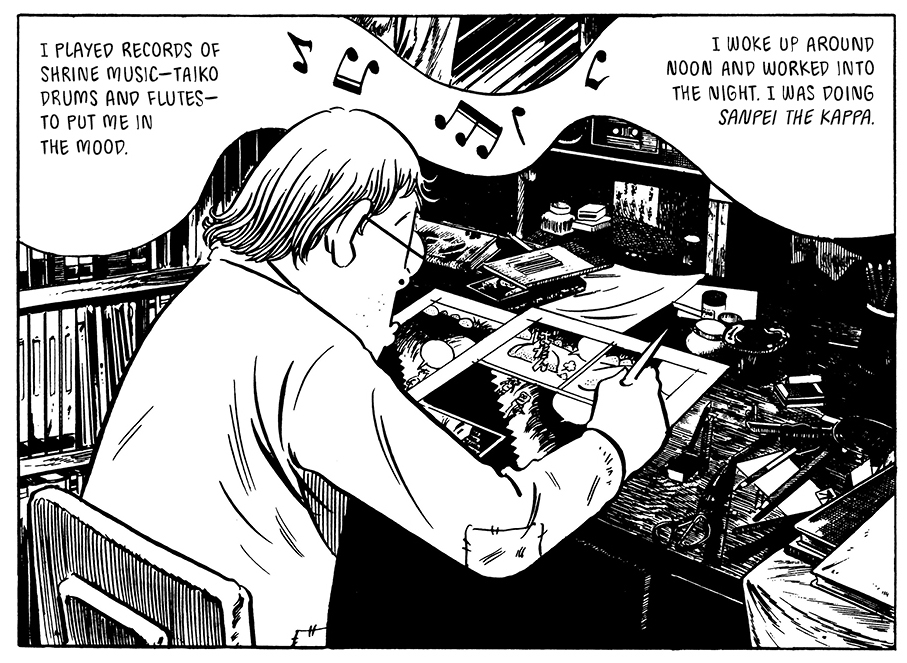 I occasionally do translation battles with my friend Jay Rubin, who is a translator of Murakami Haruki, professor emeritus of Harvard, and defines the world “venerable.” Anyways, we swap texts and challenge each other to do translations of things we are working on, and then compare. In this case, I gave him a chunk of the then-most recent volume of Kitaro. When talking it over, he pointed out that a seemingly throw-away gag by Nezumi Otoko is a clever reference to a classical work of Noh theater, the Kyogen play Kaki Yamabushi, or Persimmon thief. Jay, with this background in classical Japanese studies, immediately connected with the line. I missed it completely.

His works are intensely layered. From a young age Mizuki absorbed information like a sponge, soaking up the works of philosophers like Goethe and artists like Durer. His mentor Nononba filled his imagination with tales of invisible worlds and yokai. Yet all of this esoterica was grounded in physicality; poverty, a rough childhood, and war meant Mizuki was intently aware of the fact that he lived in a human body. Mizuki emerged a glorious combination of anima and animus, of sacred and profane. All of which he channeled into his art.

I’ve been watching some of the events in Japan as they celebrate his centennial, and it never fails to astound me how much he meant to everyone. I watched the governor of Tottori prefecture and the mayor of Sakaiminato appear on TV cosplaying as Mizuki’s most famous creations Kitaro and Neko Musume. They’re on there with Mizuki’s family, swapping stories, talking about what he was like as a person, about what his works meant. And… this is a cartoonist! A guy who made comic books! Just imagine, for a moment, the governor of wherever you live, a career politician, showing up on a TV show dressed as a cartoon character. Full cosplay too, mind you, not just a hat or a t-shirt. What an immense show of respect to someone who drew comics. But of course, Mizuki was not just a cartoonist.

Mizuki Shigeru is never one thing. In Japan he is equally a folklorist, a philosopher, a fine artist, an anthropologist—I think the word “sage” might sum him up nicely.  There are books filled with nothing more than his musings on life and his philosophy of laziness that the workaholic Mizuki never quite lived up to himself. In modern terms, Mizuki was ahead of his time in advocating for self-care and the power of getting a good night’s sleep.

At the same time, he was Japan’s conscience. A survivor of war and some of the worst the country had to offer, Mizuki was relentless in holding his own nation accountable. Whether producing works on the military sex slaves known euphemistically as “comfort women,” or using his own life in autobiographical comics detailing the reality of armed conflict, Mizuki never failed to raise his voice against those who tried to repaint history as something more pleasant.

And he made comics. Great comics! Amazing comics! Funny comics, scary comics, intelligent comics, stupid comics. He elevated the comic book art form to new levels, creating characters that will still be around after we are all long gone, and a style so unique it can never be imitated yet permeates the media. He was one of the giants. A hundred years of Mizuki Shigeru; I have no doubt that in another hundred years they will still be talking about him.

As a kid in school, Mizuki was asked what he wanted to do with his life. He responded, “After graduating, I will serve the people of my country by making art.” As we celebrate what would have been his 100th birthday, I think we can agree he succeeded in this goal. Happy 100th birthday, Mizuki Shigeru. I hope you are lazy at last.

—Zack Davisson, translator of the Kitaro series, the Showa: A History of Japan series, and other works by Shigeru Mizuki

New editions of Onward Toward Our Noble Deaths and the Showa: A History of Japan series hit stores August 2022!

Here’s a story about Mizuki Shigeru’s comics. I occasionally do translation battles with my friend Jay Rubin, who is a translator…

The legendary mangaka Shigeru Mizuki would have turned 100 years old on March 8th. A beloved national treasure of Japan, we…