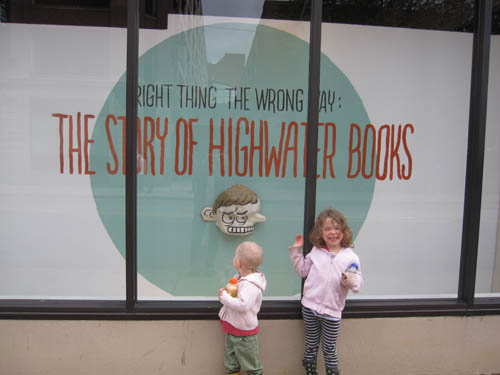 This past weekend I went back home to Boston to hit the Boston Book Festival for a day, take in the Highwater show, and visit family and friends. The family argued and the friends were maudlin so we’ll skip that.

This past weekend I went back home to Boston to hit the Boston Book Festival for a day, take in the Highwater show, and visit family and friends. The family argued and the friends were maudlin so we’ll skip that.

The Highwater show was great. Lots of old ephemera and minis that I had forgotten about. It was nice to see originals by Kurt Wolfgang and illos by Megan and puppets by Greg Cook. The folks who worked on it (TD, Brooke, Jef, Greg, and Emily) did a great job. There’s a small photoset here (Facebook) if you care. 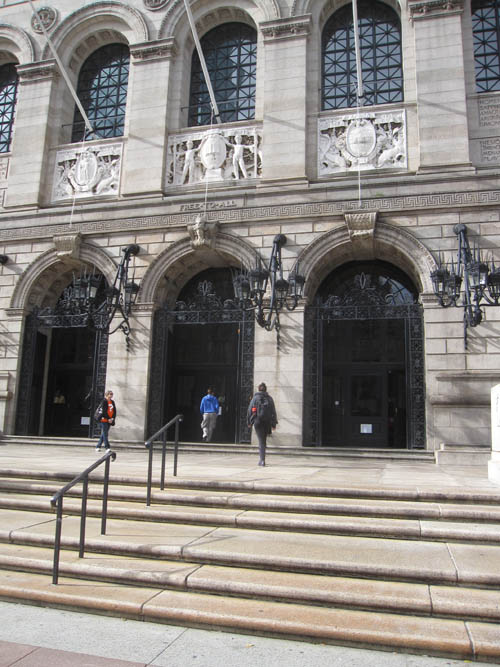 Copley Square is right next to the stately Boston Public Library. They have free books in there. Do not tell the Book Festival people. 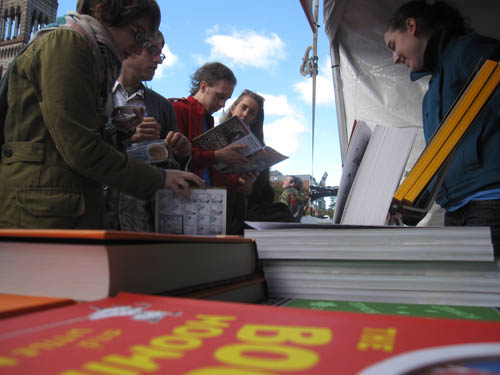 Book fairs are great because you see a much different crowd than the comics shows. Mostly people say “what are you? A bookstore, a publisher?” Also, many people call the books “graphica.” Looks like Paul Constant has won. AND people stopped by often to tell us that they loved the name. Aaaw, book people. 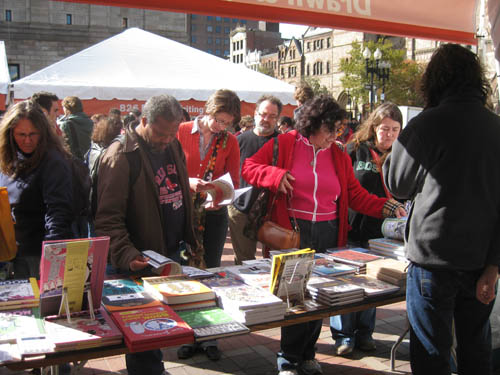 It was cold in our little cave so Alison and I bundled up. But no windstorms (well, at least not as bad as last year) or rainstorms. It was actually a decent day. 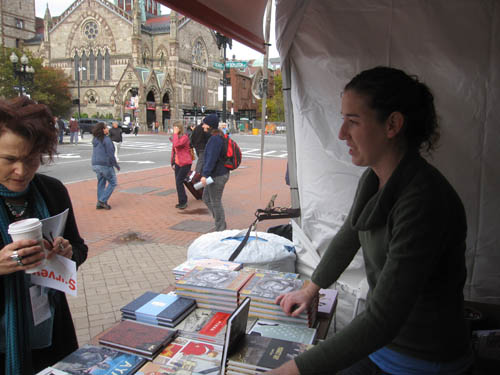 Alison, the D+Q booth MVP. Let’s face it, the rest of us are pretty tired of each other. Alison comes in and is just happy to not be serving pie and coffee for a change. 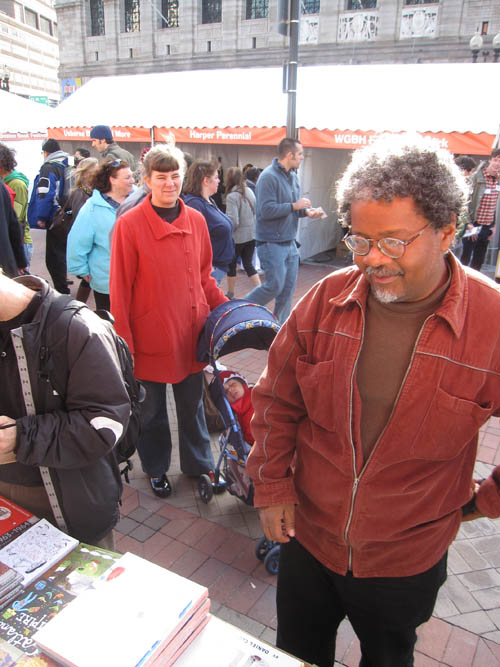 My old boss, Tony Davis, from the Million Year Picnic. A kind and generous man whose support helped me get the great job I now have. In the background his wife April (sorry about the squinty photo, April) and son Ethan. 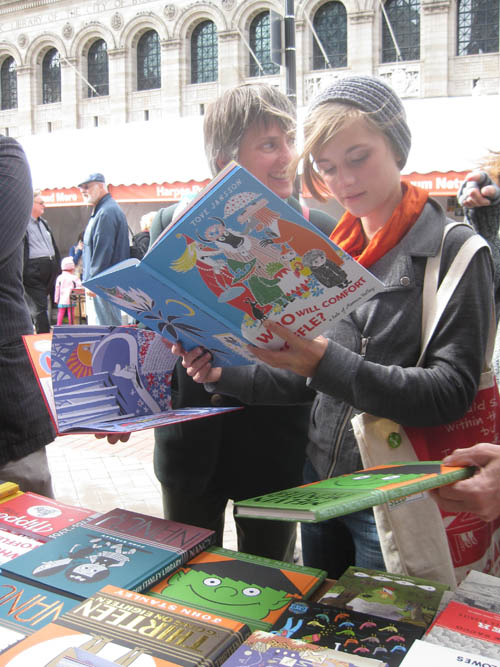 Of course you have a dog named “Snufkin.” Bless you. 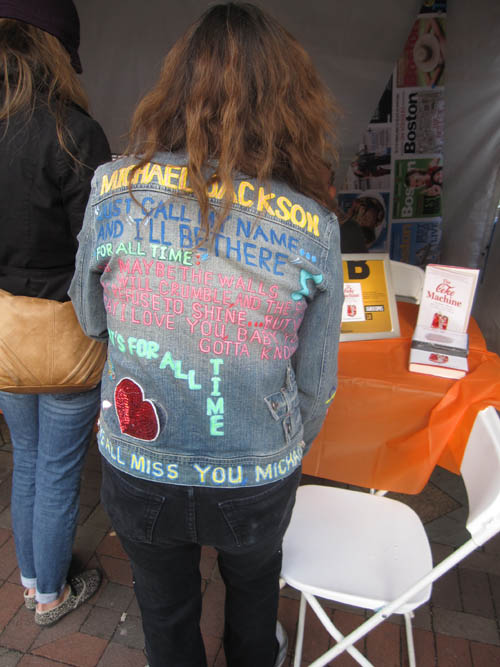 Also, book fairs really have an eccentric crowd much more so than the comic shows. Show some respect for the King of Pop people! 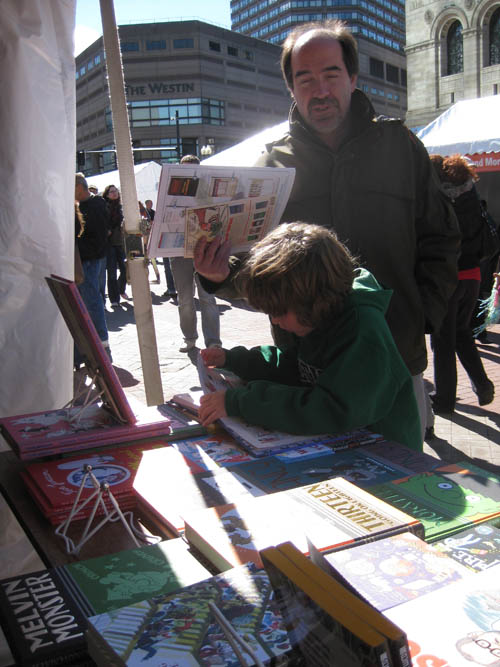 My sales pitch went something like this: “He’s a portly lad who thinks quite highly of himself and that attitude often facilitates his getting into scrapes.” Replied the young boy, “Dad, I can’t read outdoors. It’s too bright.” 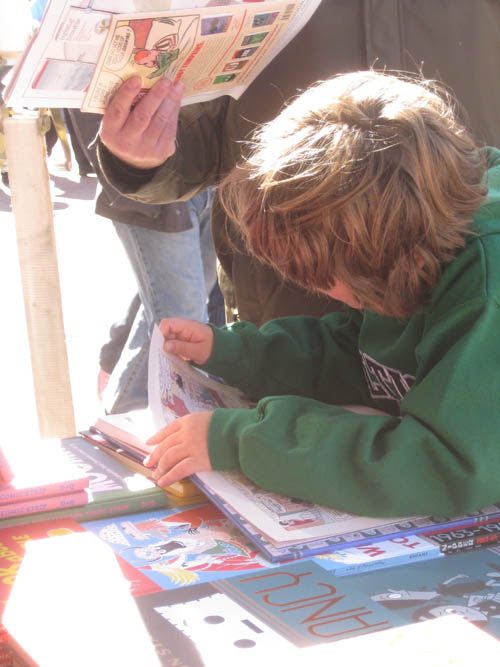 Not pictured. Many friends who stopped by to say hi, famous designers and authors, the kid who handed out fliers for his comic event, and Alison chasing after the guy in a Curious George costume trying to politely get a picture.

And I leave you with this video of 826 Boston tearing down their booth. They had a typewriter set up at the front of the booth and asked people to sit and type a few lines. This young lady was possessed! She typed like this for about an hour. Hunt and peck, touch chin, hunt and peck , touch chin. What was she writing? The Event fan-fic.