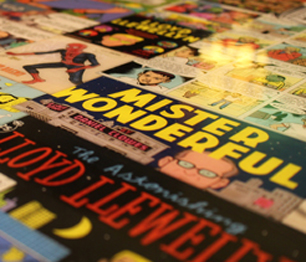 Another year, another SPX, that’s what I always say. But it wasn’t really just another SPX, now was it? SPX 2013 was our very best SPX yet, which means Julia and I have been getting all sorts of high fives, back pats, head rubs, belly scratches, etc. But let’s be honest—we really just stood around basking in the plentiful sunlight that the larger space provided while grabbing billz and coughing up zingers.

All right, so here are some fun things that happened, in some sort of ruff chronological order.

The weekend started off for us in Baltimore at Atomic Books. Traffic was nuts and we didn’t really get there in time to catch many readings (ugh), but we did get there in time to catch the after party (glug). They built this great new bar in the back—goodbye selection of well curated records, hello locally sourced beers. HELLO! A bookstore that’s also a bar? Have I died and gone to heaven? Catch me, I might faint. Oh, and the bar counter is solid Dan Clowes art. So double hello. Double cool. Double faint. You get it. Go there if you can, etc. 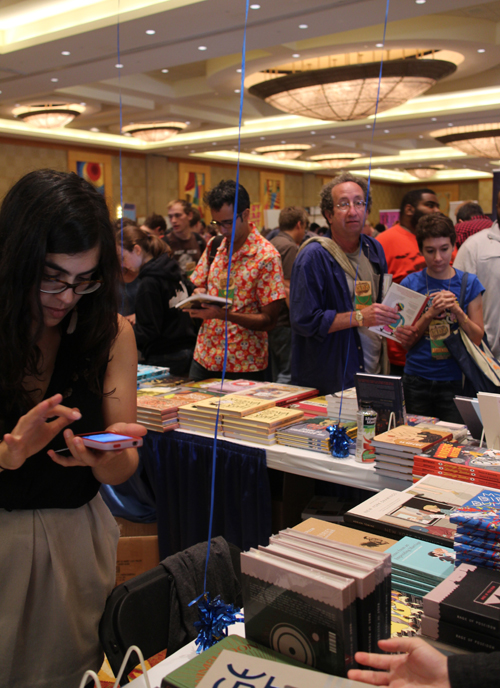 I guess we didn’t really take a quintessential booth shot, but here’s something. Check out how packed it was! Clap eyes with all our pretty books! Laugh at Julia learning how to operate an iPhone. Peep those shiny strings that were holding up our I’m-nominated-for-an-Ignatz balloons. See the customer patiently waiting to buy a copy of Pete Bagge’s Woman Rebel while I was off dicking around somewhere. 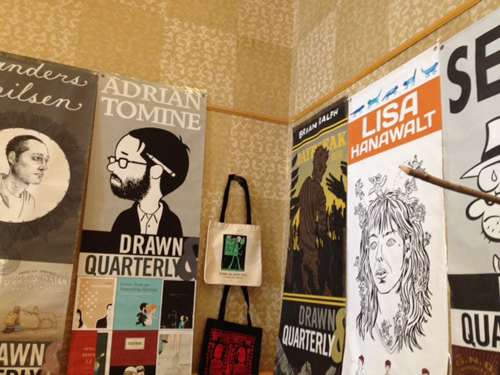 And here’s the booth from another angle. On the left we have banners hung by Anders Nilsen; on the right banners hung by Brian Ralph. Look Brian, this says nothing of your stature—Anders is just a tall drink of water! 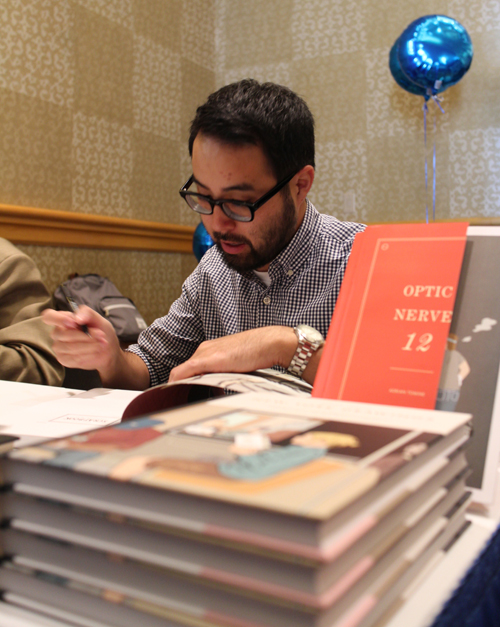 After the rush to get the booth all shined-up, we slapped on our vests and were ready to roll with a full slate of signings. Here’s Adrian Tomine hiding behind a stack of exquisitely designed books. Adrian was there promoting his new comic, Optic Nerve 13! If you read it and liked it, send him a message by Pony Express! 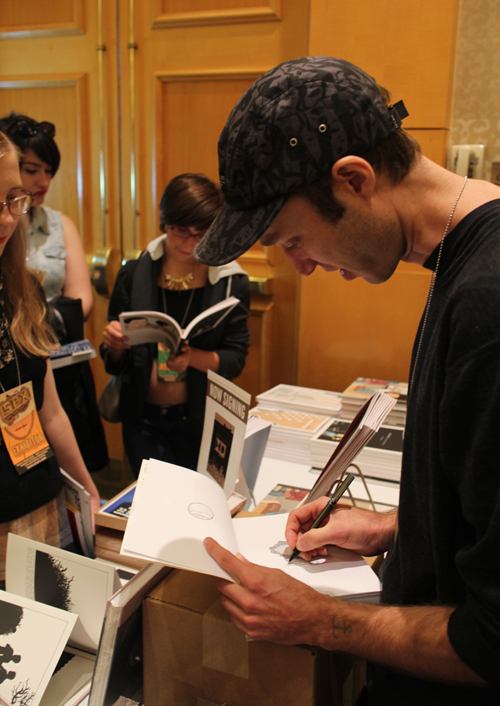 And here’s Anders Nislen doing the Chester, or—signing on top of a cardboard box. Every time I use that phrase people seem so confused, almost like we’re talking about two very different things. Huh. I’m stumped. Anyway, Anders was there celebrating his new fancy accordion book, Rage of Poseidon. 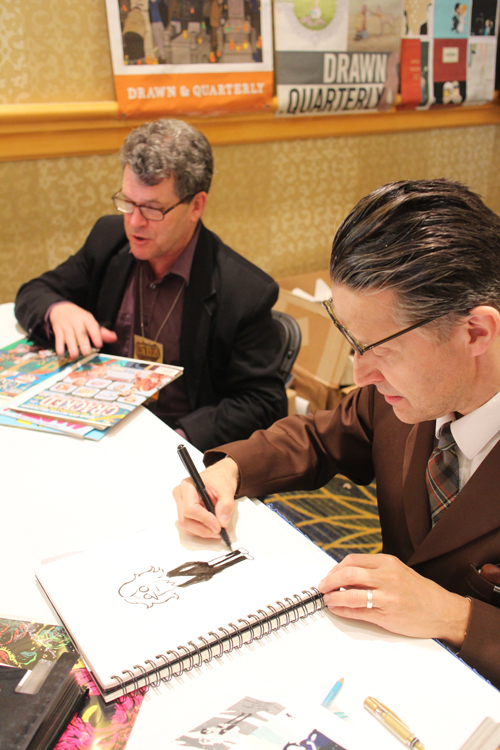 And here’s Peter Bagge and Seth! Pete was promoting his new book Woman Rebel: The Margaret Sanger Story. Seth was showing off shiny new copies of Palookaville 21. Please note that Seth is drawing a character from Adventure Time while Michael Deforge stood near by whispering “wrong, wrong, wrong.” 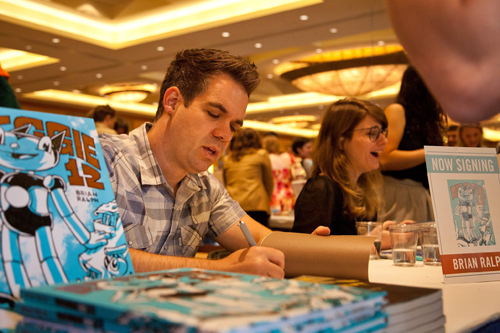 (Photo cred: Meredith Rizzo. Thank you!). And here’s funny duo Brian Ralph and Lisa Hanawalt! Brian was slinging copies of Reggie 12; Lisa was hitting people in the face with My Dirty Dumb Eyes. Here we see Lisa stifling a yawn while Brian tries to explain another classic anime reference in the pages of Reggie-12. 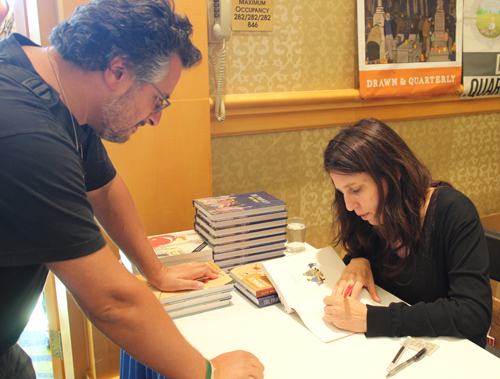 And last but defo not least, the always charming and delightful Rutu Modan, all the way from Isreal for the second half of her tour for The Property. 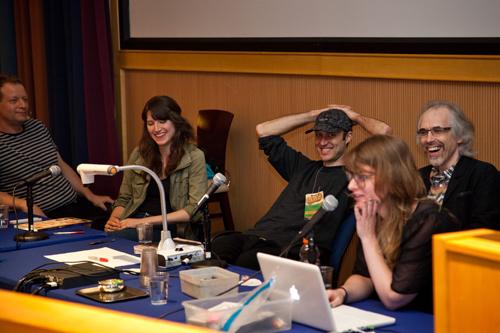 (Photo cred: Meredith Rizzo. Thank you!) Including photos of panels is not always that interesting, but look at this knock-out line-up! Is it just me, or is comics really stepping up its cutie game? L-R: Michael Kupperman, Leslie Stein, Anders Nilsen, Bob Sikoryak, and Lisa Hanawalt. I couldn’t make it to this special SPX Carousel because I was mad busy rollicking around counting my money, but by all accounts this was super fun and there was lots to look at, if you know what I mean.

The panels I did make it too were great. Bill Kartalopoulos did an excellent job with the programming this year, as usual. Thanks, Bill! 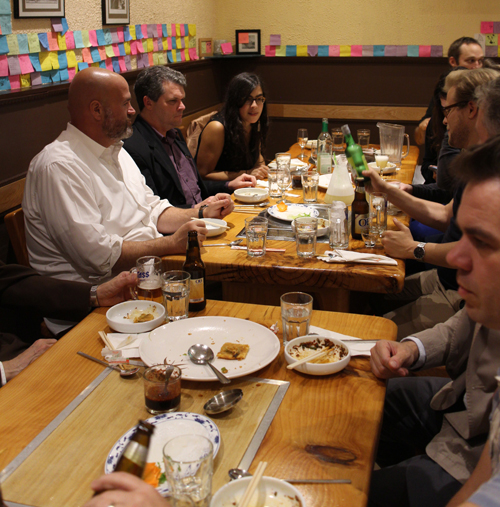 A hard day’s work was followed up with some tasty treats. The old loop around: Tom Spurgeon, Peter Bagge, Julia Iglesias, Anders Nilsen, Rutu Modan, Lisa Hanawalt, and Brian Ralph. Spurge made me wait while he untucked the napkin from his shrt collar for this shot which at the time seemed a little prima donna-ish but now I can see that it made for a better shot. 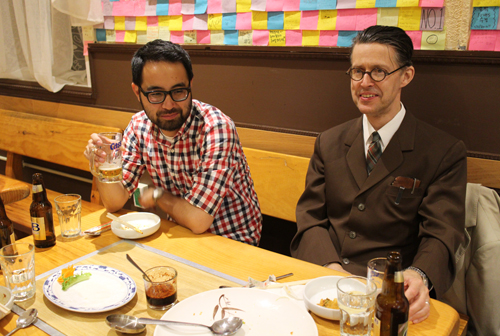 And on the opposite corner old pals Adrian Tomine and Seth enjoying some QT. 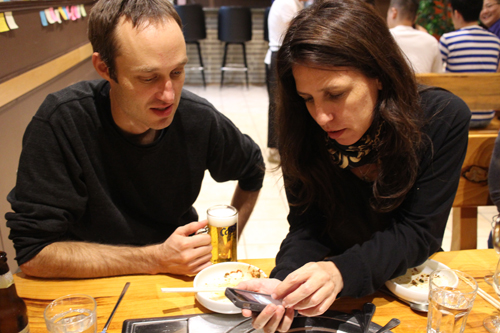 This made me happy: Rutu showing Anders funny photos, and just generally enjoying each other’s company. 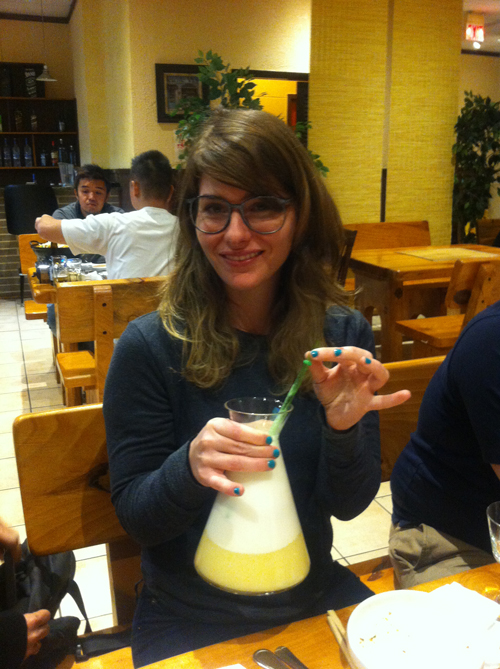 Oh, and Lisa drank this entire beaker of pineapple soju cocktail and then showed us all her butt. Just kidding. Lisa is nothing if not a lady! She would never. 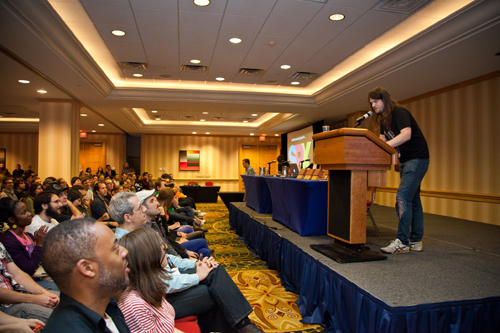 (Photo cred: Meredith Rizzo. Thanks!) Look: we didn’t really take any photos at the Ignatz awards for the same reason that we didn’t take many panel photos, but we did go and it was really nice. The people at SPX sure know how to run an award ceremony that won’t kill you. Chuck Forsman won best mini or something, but mostly I’m just posting this because former D+Q intern Chuck’s been working real hard for a while now getting Oily off the ground and it seems like if anyone really embodies the spirit of SPX it’s this long-haired, torn-pant wearing joker. So congrats, Chuck, you tall drink of American beer.

Michael DeForge won three awards (but those pictures were stinkers) and gave really eloquent acceptance speeches—is anyone nicer than Michael?—and Jillian Tamaki won for Super Mutant Magic Academy, which we’ll be collecting in the nearish future, and which I think we can all agree is one of the funniest comics on the internet today. Other Drawn & Quarterly nominees included Miriam Katin, Lynda Barry, Genevieve Castree, Dan Zettwoch, and Rutu Modan (all not-Winners.) Rutu was the presenter for an award immediately after she lost didn’t win and gave an incredibly funny speech wherein she talked about how terrible it felt to be a loser but still have to go on stage, among other things that won’t really reproduce well here. Anyway, she was pretty much the star of the awards, with many people coming up to me the next day to tell me how funny she was. 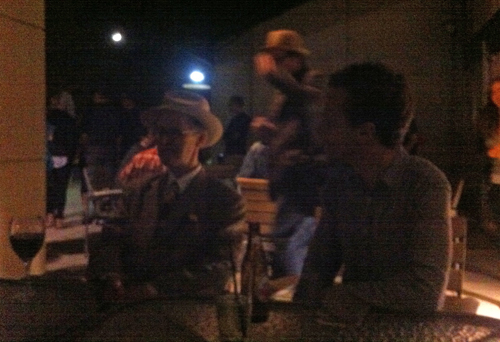 And this is pretty much what our evenings looked like—blurry wine outside with our cartoonists. It was really nice to be able to catch up with them all. Here’s Seth talking to Jon McNaught. They are fans of each other but it was the first time they had met. It was nice also. Cartoonist crushes, sigh. 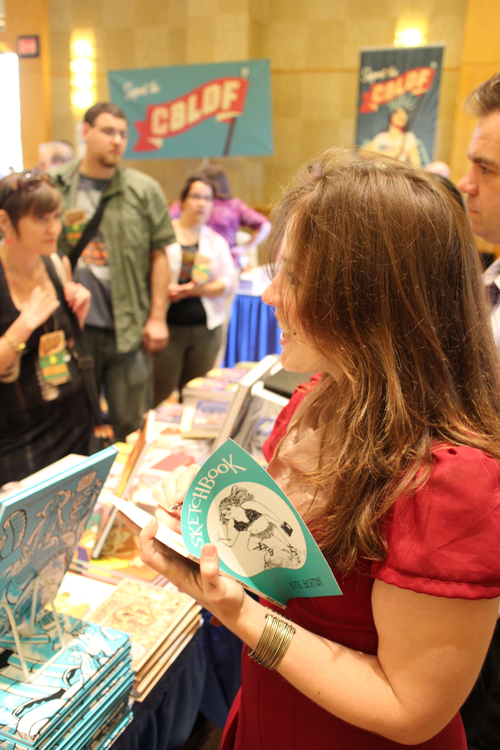 The next day was basically the most relaxed day behind a booth I’ve ever had. Just a bunch pals hanging out. Kate Beaton stopped by and was kind enough to greet some fans, sign some books, even though she was just attending the show as a regular Joe Shmoe. 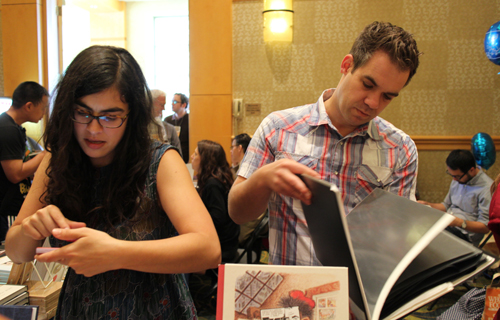 Brian—known for his avuncular charm—took the time to look at many portfolios (happy 40th, B Ralph!), always giving thoughtful feedback. Julia was STILL trying to understand the iPhone at this point. She’s still in America and has been sending me dozens of selfies and snap chats from there, so I think she’s getting the hang of it now. 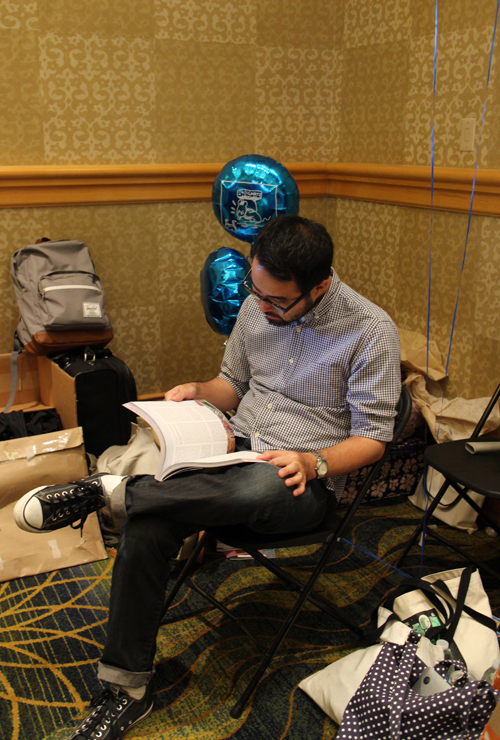 This was a special/funny moment: Adrian reading the Chris Ware interview in Rookie Yearbook Two. I don’t really know how to articulate what’s so awesome about all of this, so if you don’t get it, that’s fine. And if you do, please take a moment with me. 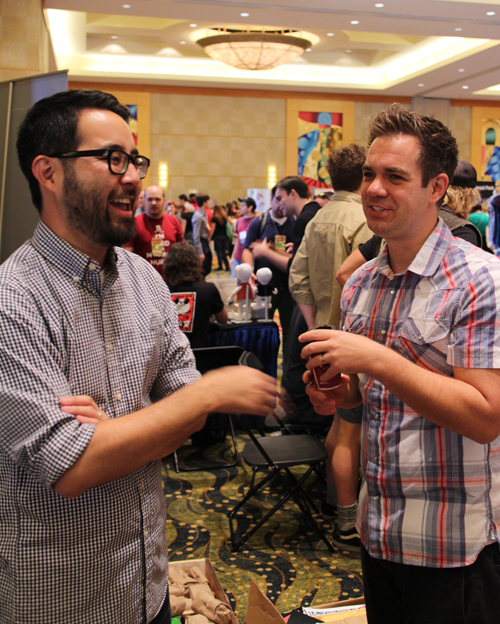 Adrian and Brian, probably talking about sports or something? Fried chicken? Who knows. Handsome pair though, for sure. 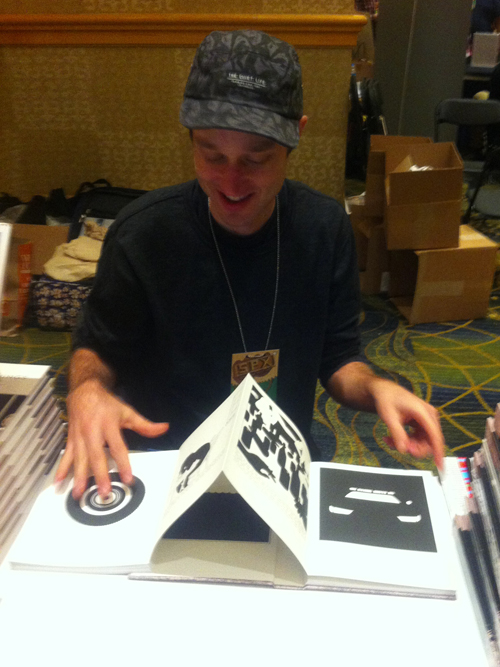 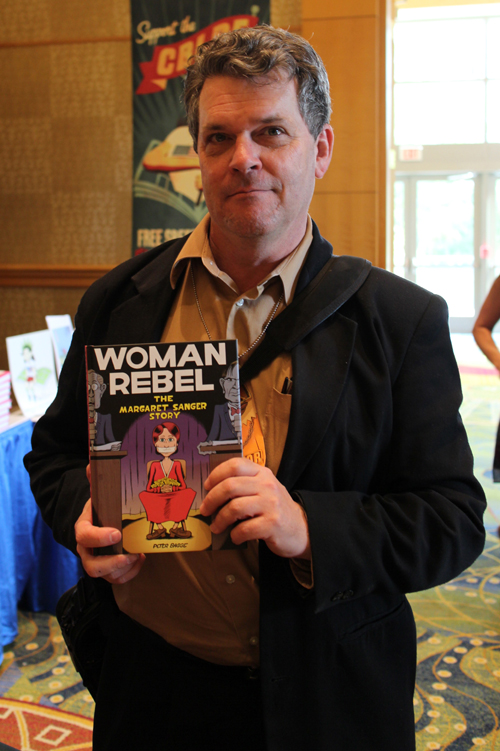 And here’s the distinguished Peter Bagge on his way out the door after a pretty successful weekend. Just moments, MOMENTS, after he left… 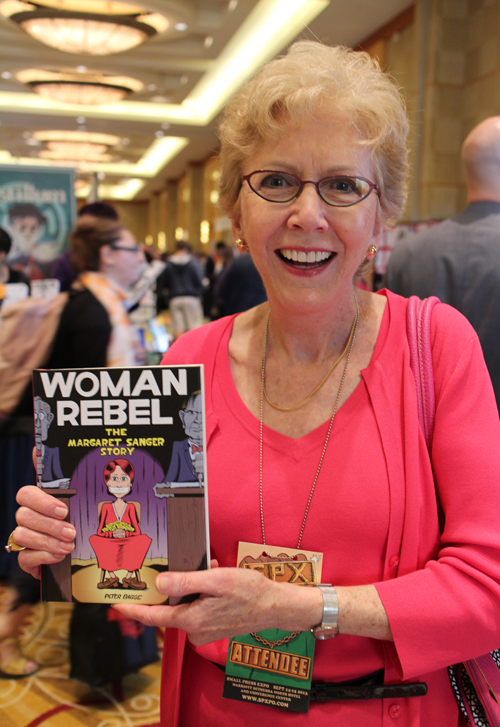 Margaret Sanger’s granddaughter came by the booth. I’m getting tired and this blog post is too much for anyone to actually read and I don’t feel like re-recalling this incident, but you can read about it here. And please do. It was a really great moment. 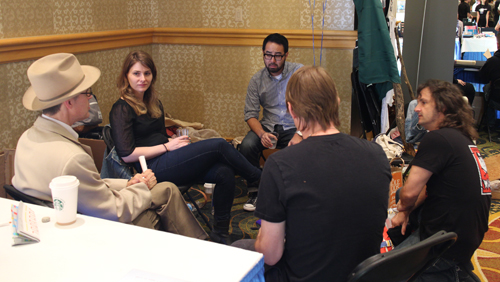 And this is how the show ended, with Seth, Lisa, Adrian, Jeff Smith, and Kevin Huizenga deep in conversation behind our very spacious booth. I only caught a bit of the conversation, but some words that stood out where “Tracy,” Julia,” “real nice,” “above and beyond,” “snappy dressers,” “legs for days,” “smiles longer than miles,” and so on.

So basically SPX was a success on all fronts. Thanks to all our cartoonists who came out and put in the time behind the booth. It was so so nice to see you all. Can’t wait for next year! Hopefully by then people will stop coming up to the booth with smiles on their faces looking for Tom Devlin and then walking away with pouts when all they find is beautiful Julia and me. Come on! We get it already!

Just love it all

I tried to get Jade to cut out Putnam Gray’s face so she could stick hers through the hole, but as…

Imitation is the Sincerest Form of Flattery

Waaaaay back in 2001, the chief (D+Q publisher and editor-in-chief Chris Oliveros) returned from the small press festival SPX with a…