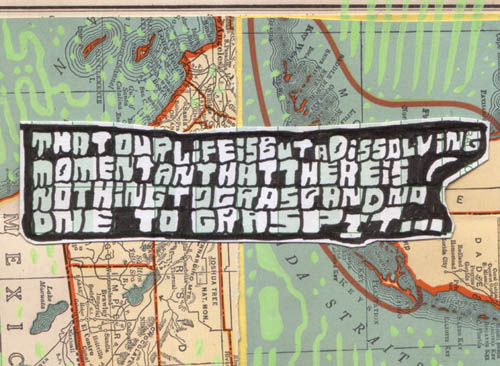 You better hop in the car and go here and then drive, um, 1000 miles to here if you know what’s good for you.

You better hop in the car and go here and then drive, um, 1000 miles to here if you know what’s good for you.

Seth Scriver (Stooge Pile), Keith Jones (Catland Empire), and Sonja Ahlers (The Selves) are all at Desert Island in Brooklyn tonight. Do I need to remind you about these portraits that the boys will be making? I am not sure if Sonja will be portraiting but you should go meet her because she is that girl who used to be in all your classes and you’d see her out at the occasional rock show wearing those babydoll dresses (it was the 90s afterall) and you’d be too afraid to talk to her especially after you saw some of her art at a friend’s apartment except the thing is she’s totally approachable, so go talk to her about Stevie Nicks and that TV show that Kristie MacNicoll used to be on, what was it, Family?

Ron Rege, Jr. will be in Austin TX for an artshow at DOMY and the launching of his very own beer(!!!!!) Well, he didn’t brew the beer himself he just designed the label but, c’mon, tell me you don’t think that’s just about the most awesome and unexpected cartoonist package design ever. Maybe except for this?

{Rather than rewrite this whole post I’ll just say that I have no idea what day it is and the Desert Island thing was last night. Oops. Well, there’s still time to get to Texas.}

Thanks to everyone who came by our booth in San Diego, not only for the Tatsumi signings but for the Adrian…